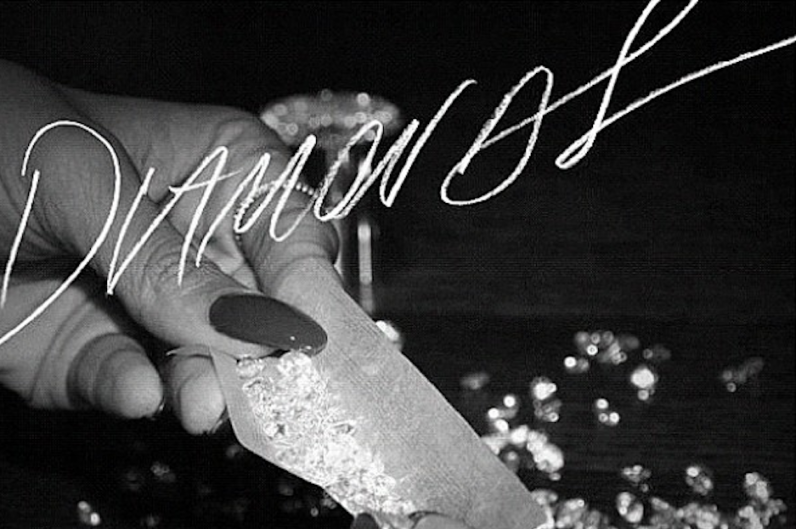 Another year, another Rihanna album. As the Barbadian chart-dominator readies her seventh full-length since 2005, new single “Diamonds,” which NME quotes her as calling a “happy and hippie record,” has officially premiered on Rihanna’s new album website. As that description — and the cannabis-themed cover art — suggest, the new single is relaxed and uplifting.

“You and me, we’re like diamonds in the sky,” Rihanna repeats over a galloping midtempo beat, enveloped by ersatz-orchestral synth swells. Lyrically, the implication is closer to Lucy in the sky than the blood-tainted “diamonds in the sky” on Kanye West’s Late Registration consciousness-raiser “Diamonds From Sierra Leone.” Then again, slick, soft pop like this is just as likely to soundtrack a laughing-gas trip at the dentist’s office as any recreational home drug use. And sure, it’s all a bit simple, to the extent that what lyrical effort is on display here doesn’t always even make sense: If diamonds are forever, it’s odd that in the next breath Rihanna compares the object of her affection to a “shooting star I see,” which, you know, isn’t forever. You know?

Puff, pass. Past Rihanna hits, going all the way back to “Umbrella,” have of course been shiny and uncomplicated, too. Stargate and Benny Blanco produced, and it shows in the song’s multiple catchy hooks (sung and spoken, instrumental and vocal) and airtight construction. Jay-Z, King Diamond himself, likely approves.

Hear an official stream over at Rihanna’s new album website, or listen via Popjustice below.