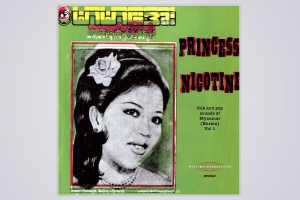 A compilation of Burmese pop music unearthed and compiled by Sun City Girls members Alan and Rick Bishop. Originally released on the Majora label in 1994, it was one of the inaugural releases on the Bishop’s weird world music imprint, Sublime Frequencies. Little-heard outside of the junta-repressed country, the album documented some 50 years of music from stars like Mar Mar Aye, Bo Sein, and Tonte Theintan. Not “pop” in the western sense, but full of audacious, brilliant songs.

Deakin: I remember the first time I heard the Princess Nicotine compilation. The rhythmic movement seems random, but you know that everybody doing it knows exactly where it’s supposed to be. What do I need to do to my brain to make that actually make sense? To me, [it’s the same with] that whole world of Balinese stuff…Searching for YouTubes of current groups of Balinese musicians, which is crazy. Young kids between 10 and 18 years old that are part of these orchestras that just look like they’re part of these after-school things; but they’re completely locked into these unfathomable rhythmic patterns that you cant wrap your head around.