"Maybe this is a reaction to all the bullshit bands that pop up and disappear in a couple of months." 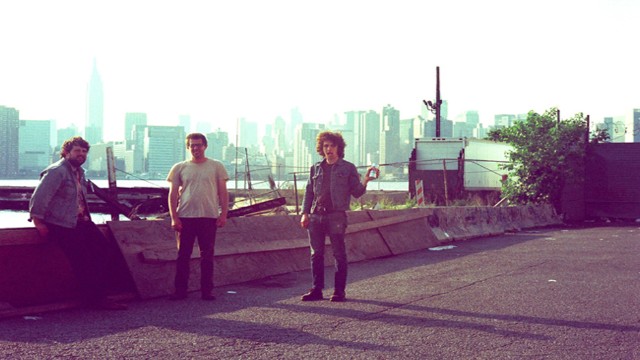 Who: Nude Beach are Ryan Naideau, Chuck Betz, and Jimmy Shelton, three All-American boys who grew up playing in All-American punk bands together on Long Island’s North Shore, only to find themselves thirsting to do more of the same once they all landed (separately) in Brooklyn years later. “This band was just a really fun way to get together on the weekends and get drunk and play music,” says Naideau, 25, who also played a pivotal role in giving his power trio their moniker when they officially started up in 2008. “We were sitting together at a [non-nude] beach at the end of the street where my parents live [in Northport, New York], coming up with all sorts of stupid names. I wanted to call the band Beach Boys because I thought that was a funny re-appropriation. But, it was a little too close to home, and a little too stupid. We’ve never all gone to a nude beach together. But we should.”

Raised on promises: Judging from their sound, it’s no surprise that the bandmembers have spent at least a dozen summers slathered in Tom Petty-penned FM gold, in addition to studying the songbooks of Paul Westerberg, Alex Chilton, and Shoes. As a result, Nude Beach’s hail-fellow songs have provoked some common seasonal ahd recreational descriptions — “In a weird way, it’s flattering when people say that we play ‘beer-drinking barbecue’ music,” says Naideau. “There’s also: ‘This is what you put on when you’re grilling hamburgers at a barbecue.’”

Clerks: Though the newly launched Other Music Recording Co — an extension of the New York record store of the same name — recently reissued Nude Beach’s second full-length II in wide release (with help from Fat Possum), Naideau actually spent years working in Brooklyn’s Academy Records, a day job that brought him face-to-face with regular shoppers/musical heroes (Richard Hell, Thurston Moore). “This one time,” Naideau says. “Bob Pollard [of Guided By Voices] came in. I immediately asked my friend to grab some GBV records and we made him sign them, like a bunch of fanboys.”

Maximalism? STFU!: “I don’t think we’re trying to make a point by being in a band like this,’ says Naideau of Nude Beach’s neo-classicist approach. “It has a lot to do with it being the music that we grew up listening to, the music that we’ve always loved. Why wouldn’t we make something that sounds this way?” Then he pauses for a second to slightly revise his thoughts. “Maybe we are trying to make a statement: We’re trying to be a band in 2012 that doesn’t suck and isn’t trying to ride some wave. I get so disenchanted with new music sometimes that maybe this is a reaction to all the bullshit bands that pop up and disappear in a couple of months.”