‘NIGHT OF THE LIVING DEAD’

'NIGHT OF THE LIVING DEAD' 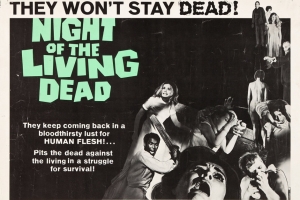 Four decades before The Walking Dead revolutionized flesh eaters for the small screen, “undead” auteur George A. Romero’s 1968 post-life romp redefined the voodoo folklore concept of zombies with far scarier, sci-fi-derived origins. Centered around a group of small town folk hiding from hissing hungry corpses who have risen from their graves in search of fresh meat, the film boasts a brassy, percussive soundtrack and a Twilight Zone-like twist that still pack a punch in an era where zombies provide fodder for TV commercials.