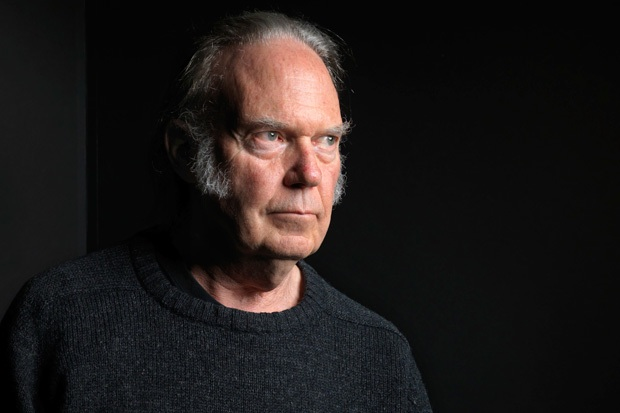 Waging Heavy Peace, Neil Young’s just-released and heavily anticipated memoir, is like his career in microcosm. Nearly 500 elliptical pages long, the book is beautiful, psychedelic, rootsy, ragged, terse, boring, riveting, sad, funny, nostalgic and forward-looking. Is it great literature? No. Does it include more than a casual fan probably wants to know about model trains and electric cars? Yup. It’s also a must-read for Neil fans. (Not that the notoriously independent 66-year-old cares what anyone thinks.)

For those daunted by the book’s length and baggy structure, but are still interested in a life and career that’s helped shape rock music, we’ve pulled out the juiciest parts.

The Book Was a Cash Grab
“Writing is very convenient, has a low expense, and is a great way to pass the time,” argues Young. “I highly recommend it to any old rocker who is out of cash and doesn’t know what to do next. You could hire someone else to write it for you if you can’t write yourself.” Later on, we learn that Young wasn’t being facetious. “Family business is on the agenda, and reckoning with things is at hand … All of these houses, five on the ranch and three on the Hawaii property, may be too much for us to handle, and the moment has come to make choices. We have never looked forward to this, thinking that ultimately something might happen to help us avoid the inevitable, but here we are.”

He Didn’t Get to Kurt In Time
Kurt Cobain infamously quoted Young’s lyric “It’s better to burn out / than to fade away” in his suicide note. But the troubled Nirvana singer had been on Young’s mind, too. After hearing of Cobain’s death, Young reminisced that “I, coincidentally, had been trying to reach him through our offices to tell him that I thought he was great and he should do exactly what he thought he should do and fuck everybody else… So when he died and left that note, it struck a deep chord inside of me. It fucked with me.” Young’s ensuing album, Sleeps With Angels, was written to honor Cobain’s spirit.

Sounds Rough
Young is convinced that poor audio quality is the reason for what he feels is music’s devalued place in contemporary culture. “You know,” he writes, “the way people experience music today is so different from how it used to be … the music is not the problem. It’s the sound … It is gone now, but we could get it back with a quality sound that is visceral.” As he (extremely thoroughly) explains in the book, Young is working on a high-quality digital sound project that he hopes can deliver the visceral sonic oomph that he misses.

Neil, Bruce, and Clarence
Young called Bruce Springsteen after the latter’s iconic saxophonist died in 2011 and tried to offer his support. “So I spoke to my old friend Bruce and told him I was feeling it, his loss of Clarence … I told him when he looked to his right [onstage, where Clemons used to stand] I would be there.”

He’s Not Bitter at Being Sued for Not Being Himself
When Young was on Geffen Records in the early ’80s, he was sued by his own label for making records “uncharacteristic of Neil Young.” This wasn’t all bad. “I have never thought it was my job to make a record company look great,” he writes. “I thought it was the other way around.” He continues: “[Geffen] tried telling me what to do so they could have their hit … they decided I was purposefully making records that made them look like losers. They they sued me … This, of course, made me look like a hero.”

Conan the Contrarian
Young, who performed on Conan O’Brien’s last show with NBC, was on Team Coco. “Conan was left hanging,” writes Young. Later, Young writes of seeing a documentary about O’Brien’s post-NBC tour. “This was a road movie, and it made me uncomfortable . . . The shows were not the problem. He was just not handled correctly. Nobody knew how to preserve and protect him on the road.”

Free Love … With a Catch
On multiple occasions, Young writes, amiably, about the downside of the Free Love era. “We had a lot of girls and a lot of fun. I got a few sexually transmitted diseases and started to become aware that there was a responsibility connected to the decisions.”

Meeting Manson
While hanging out with his pal Dennis Wilson of the Beach Boys, Young was introduced to a disturbingly charismatic singer-songwriter. “After a while, a guy showed up, picked up my guitar, and started playing a lot of songs on it. His name was Charlie … Kind of like Dylan, but different because it was hard to glimpse a true message in them, but the songs were fascinating. He was quite good.” That Charlie was Charles Manson.

Those Fat Cats In the Front Row
Explaining why he opts to have festival seating space allocated at his bigger shows, Young writes: “So these cell phones and rich folks who can afford the big bucks for prime seating distract me from what I am doing and make me feel like I am on display in a museum.”

Carded
In his eagerness to get his rock’n’roll career started, Young moved to L.A. to from his native Canada and lived for time as an illegal alien, worrying about being deported. “Thank God capitalism saved me,” he shares. “I was able to buy a green card. A real one! Through my lawyer! … America is great and capitalism rocks!”

Sweet Stephen Blue Eyes
Young sees something in his old CSNY partner that even the other initials don’t. “No one knows him like I do,” claims Young, adding, “David [Crosby] and Graham [Nash] did not have that with Stephen in the same way. I think I respect Stephen’s talent and genius in a way that they don’t.”  Crosby was better at other things, though.

I Am a Child
Maybe the most affecting parts of the memoir are when Young talks about his children, Zeke, Amber, and Ben. Ben was born with cerebral palsy, which resulted in his being quadriplegic and non-verbal. Young’s thoughts about his youngest son provide the book’s most tender moments. “He always likes sharing himself with us by watching, which is one of the gifts he has. He just enjoys what we’re doing through our joy. He has become a master of that.”

Danny and the Memories
One of Young’s early musical touchstones was Crazy Horse singer-guitarist Danny Whitten. Whitten was struggling with drug addiction when he rehearsed with Young’s Stray Gators band in 1972. His playing wasn’t strong enough, and Young had to let him go. Shortly thereafter, Young got a phone call. The heartbroken Whitten had OD’d. “I knew that what I had done may have been a catalyst in Danny’s death,” recalls Young. “I can never really lose that feeling. I wasn’t guilty, but I felt responsible in a way.”

A Gipper Slip
In the mid-’80s, Young was pilloried for making statements in support of then-President Ronald Reagan: a big no-no for most hippy-bred rockers. The way Young tells it in his memoir though, his words were intended more to mess with some presumptuous AP reporters than to clarify a political stance. “They came on the bus and started right off making derogatory remarks about Reagon. They were presumptuous; I could see they thought they had me all figured out. I was that hippie who wrote ‘Ohio’ …” So to contradict them, Young said, “the guys is president, so someone must think he is all right.” Afterward, the reporters “wrote a story that made it sound like I was some all-out Reagan supporter, and I heard about it everywhere I went.”

He’s Clean
This was also the big reveal in a recent New York Times Magazine profile: Neil Young’s gone straight edge. “Not that it matters much,” writes Young very early on in the book, “but recently I stopped smoking and drinking … I am now the straightest I have ever been since I was eighteen.” He explains that the choice is mostly due to health considerations. That choice also causes Young some anxiety, as it coincides with a songwriting dry spell. Did the spell lift? Psychedelic Pill is out October 30.