Mumford and Sons, ‘Babel’ (Gentlemen of the Road/Glassnote)

The first album Marcus Mumford ever paid attention to, he has said, was Slow Train Coming, which came out in 1979, eight years before he was born. You know, Bob Dylan’s first Christian one: “It may be the devil, or it may be the Lord, but you’re gonna have to serve somebody.”

The album was Marcus’ mom’s copy. She and his dad are big on the God thing: When Marcus was a half-year old (he’d been born in Anaheim, California, in early 1987), John and Eleanor Mumford returned to England and founded the Vineyard Church UK, which they still direct. The Vineyard churches are theoretically non-dogmatic, if bordering on Pentecostal (lots of the Holy Spirit in their Statement of Faith, not to mention “we believe that the world is under the domination of Satan”), and had apparently existed in California since the mid-’70s. They initially revolved around Bible readings hosted by Jesus freak-era contemporary Christian music OGs like Larry Norman (whose druid-inspired 1972 album Only Visiting This Planet is some excellent hard-boiled singer-songstering), and eventually played a role in the born-again conversion of, yes, Dylan.

That’s all just backstory, of course. But even if Mumford and Sons — the Transatlantically multi-platinum folk-rock foursome Marcus Mumford now fronts — hadn’t backed Dylan at the Grammy Awards last year, it would still matter, because that Holy Spirit and Satan stuff winds all through the band’s music. You can take preacher’s sons out of religion, but you can’t, etc. — ask Kings of Leon, or that guy from Collective Soul. Unsurprisingly, the ultimate objective for musicians of such upbringing is to be the next Bono. Pope rock will never die!

Consciously or not, U2-style evangelism is all over the Mumfords’ bland but biblically titled second album, Babel: blatantly in the pompous vowel-stretching climaxes of “Whispers in the Dark” and “Lover of the Light,” but really wherever keening harmonies reach for heaven the way arms stretch to the sky, as the opening title track puts it. (Though, hmm: Isn’t the Tower of Babel’s moral that we can’t scale heaven?) Several songs feature yelping woooos, and tests of despair and temptation are triumphed over at every turn. “A brush with the devil can clear your mind and straighten your spine.” “When I’m on my knees I still believe.” “Hope in the darkness, so that I may hear the light.” “Ghosts in my head / They run wild and wish me dead.” “Shake my ash to the wind / Lord forget all my sins.” “I was under your spell when I was told by Jesus all was well.” All this amid thoughts of Hell, clouded minds and heavy hearts, fickle flesh keeping heart and soul in place, and love that loves with urgency, not haste. These bromides are approximately as deep as Matchbox Twenty’s, and as smug as Dave Matthews’. But they’re sincere as all fuck! 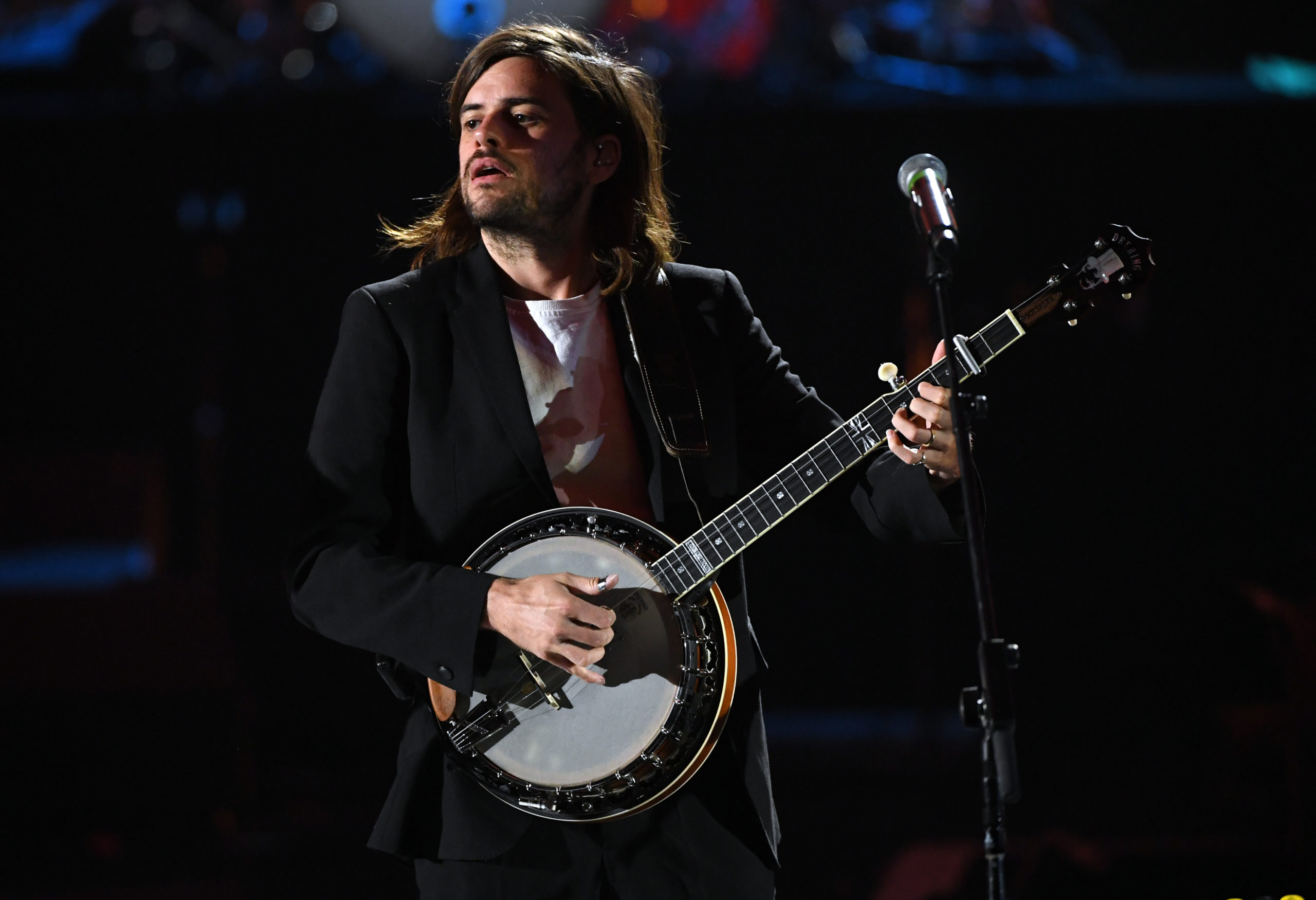 Ah, “fuck.” The most irritating part of 2010’s breakthrough Grammy Record of the Year/Song of the Year nominee “Little Lion Man” was the self-congratulatory way Marcus delivered that line “I really fucked it up this time,” like he wanted to make sure we understood just how daring his utterance was. To be fair, the repeated recitation of the same expletive in this new album’s “Broken Crown” feels more natural. In fact, with the foreboding echo and doomful build (and especially the hint of Jim Morrison blowhardiness in the chorus), it is easily Babel‘s most biting track: reminiscent of debut blockbuster Sigh No More‘s intermittently loud-rock-raving murder ballad “Dust Bowl Dance.” Songs drag on longer this time: First time out, none exceeded five minutes, but now, four do. Just like on Sigh, some of the new material does accrue body and drive as it goes, though occasionally slipping into prissy shambling or polite hoedown parts that make the Zac Brown Band seem like the Texas Playboys. Banjos and dobros and mandolins notwithstanding, calling this “bluegrass” is stretching it, though the opening moments of current single “I Will Wait” do sound vaguely inspired by the theme from The Beverly Hillbillies.

Honestly, as folk revivalists, Mumford and Sons don’t even come close to ranking, and not because of Marcus and sideman Ben Lovett’s posh education (they met at Kings College School in Wimbledon, alma mater of John Barrymore and Charles Dickens Jr.). West London scenemates Johnny Flynn and Laura Marling at least incorporate hints of African percussion and Renaissance Faire drone to keep the quaintness interesting. The Mumfords’ American visual antecedents Old Crow Medicine Show have shown a knack for Depression-era hillbilly blues moves. Eighties MTV hobos like Men Without Hats and Dexy’s Midnight Runners treated dancing around the maypole as a pop goof, with bright and shameless hooks. The Pogues and Dropkick Murphys made it get-drunk-and-fight music; Fairport Convention and Steeleye Span were students of centuries of jigs, reels, waltzes, and Morris Dances, and figured out how to modernize them, beautifully. Heck, so did Jethro Tull, and Montreal folk band Elfin Saddle who put out one of the best albums (Devastates) you never heard of this year, not to mention several troll-metal combos still wandering through Europe’s forests. But lyrical references to Shakespeare and Steinbeck assignments from their sixth-form syllabus or no, the Mumfords barely skim the surface. They don’t seem remotely musically curious.

Still, Marcus ends Babel defending himself against charges of inauthenticity and antiquity. “This ain’t no sham / I am what I am,” he declares, in his mannered Puritan burr. “Though I may speak some tongue of old / Or even spit out some holy word.” He’s just setting up straw men, though. Great artists have incorporated that old-time religion, and old-timey rhythms, ever since old times. It’s how you do it that matters. A sense of humor helps; a more exploratory sense of history maybe even more. There are no roots outside the Gates of Eden.