Mara Hoffman Shakes It Down With Ukuleles For Spring ’13

Plus: The New York designer muses about the xx and Akon, remembers her first concert experience: Michael Jackson 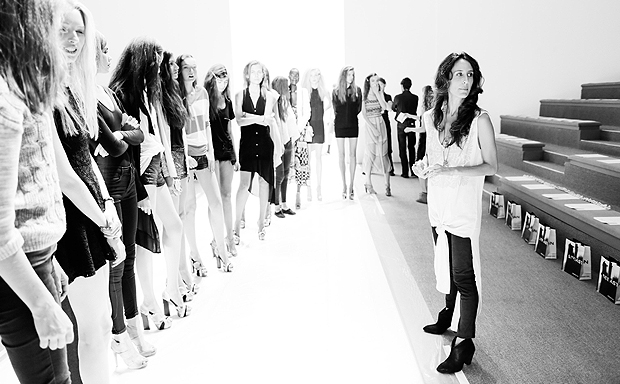 For a designer known for colorful swimsuits, statement-making dresses, and boldly beautiful prints, you’d never expect Mara Hoffman to send well-dressed models down the runway to anything slow and snoozy. But, even as a Fashion Week vet, who has previously had a live mariachi band soundtracking her presentation (yeah, we were impressed, too!), editors, attendees, and beyond were floored when Mara channeled Hawaii in New York with rollicking waves, steel-drum samples, and — surprise! — a trio of live, ukulele-playing musicians.

Mara spilled on how she pulled off the live show, her unintended office adoration for Akon, and the Michael Jackson concert she attended and was less than stirred by. In a world of serious shows in the temperamental New York weather, it’s wonderful to see someone having so much summery fun.

Tell us about the music you used in your show.
The pre-show was a little more traditional. The seating music was recorded — Hawaiian and surf music played to set the mood, and then the lights went down, and sounds of waves came over the audience. Then, three ukulele girls stood up with microphones and started playing for about a minute and a half. As that faded out, Jamie xx’s track “Far Nearer” came up, and girls start walking. For the finale — the last girl exits, the ukulele girls stand up and start playing [along] with the recorded version of “Jump In The Line (Shake, Senora)” by Harry Belafonte. How did those two songs come together, and how did you end up going with ukulele players?
Well, I worked with my good friend Ben Brunnemer, who always put my music together in the past and always DJs the shows. We sat down and I was like, “I really have this vision for ukuleles, and I just kind of want to go there.” My husband is learning how to play the ukulele for our little boy, so we have a lot of ukulele happening at home lately. It’s just such a cool instrument, and I love it. I knew the show was going to have a high vibe, as opposed to trying to take myself way too seriously, so I was like, “Well, if there was ever a time to just go balls-to-the-wall, let’s just do it. It’s spring; let’s make people feel happy, and if it turns out kitschy, at least it’s funny.”

What was the audience reaction like day of? Unexpected?
I think they were down with the ukulele players! I’ve read so many reviews from people that all got into the ukulele players, so I feel like they appreciated it. I think it was just a switch-up from the grind of seeing these shows where it’s like, “unce unce unce,” you know?

Right before the show started, were you getting nervous that they’d find it too kitschy?
A little, like “Oh God, please let this work,” you know what I mean? But we had changed it at the last minute. At first, the girls were gonna walk to a minute of ukulele, and then I was like, “No, just keep ukulele in the intro, and then bring in this music.” So, it went into a Jamie xx song with steel drums and then into that new Cat Power song, “Manhattan” which I’m so obsessed with — it’s just so…beautiful.

Was there an even more specific inspiration for this collection?
Aloha. I mean, it started as Polynesian dreams — that was the original concept of it because we were pulling references, keeping it broad in that way. And then as it continued to build, it really showed itself to me that, really, this collection is inspired by the feeling and idea of ‘Aloha’ and that transcendent phrase of hello, goodbye, love — it’s just beautiful and trying to bring a good vibe.

How did this differ from what you usually do with Ben?
Well, in the past, when I did presentations, we’ve had live music elements and worked with different musicians, so it’s not so off. A year ago for spring ’12 we did a presentation and made a Mexican story with a full mariachi band, so we’re definitely into the literal. But, this was different because I knew it couldn’t just be ukulele players for an entire runway show, because you really have to create a beat to maintain the energy for the whole duration of a show. So, it was about marrying the two, like “How are we gonna do live music and recorded music together?’ He was the one who really sort of orchestrated that.”

What kind of music do you guys play in the office?
We definitely need some new mixes! We listen to Pandora a lot — everything from Nina Simone to the Beatles to Grimes to Bob Dylan. I’m a huge Bob Dylan fan.

Have you ever seen a concert that was really significant to you?
The first concert I ever saw in my entire life was Michael Jackson, Off the Wall. Oh my God.

How does it ever get better than that?
I don’t know, well — I was much younger, I was probably six or seven, six maybe. I mean, I was so excited — it was like, beyond exciting. My mom stuffed my ears with cotton, and I was very little, and the music was almost pounding through my chest it was so hard. So, my mom went in to hold me — she just felt my whole body vibrating — so, she held me close and I fell asleep. I know, anticlimactic!

Awww! That’s pretty awesome though, Michael Jackson wasn’t entertaining enough for you!
It was, but I just couldn’t. Rocked my whole body!

What’s the most played song or the most embarrassing song on your iTunes?
[Laughs] I know what this is. So, five years ago or whenever this song came out, we had a shared computer in the office. One of the girls that worked for me, (she’s not here any more) had put the album onto iTunes on this one old, busted computer, and it’s where we play our music out of now, but that song that starts, “CONVICT!”, by the same guy who sings that…”I see you windin’ and grindin’, up on that pole…!”[laughs]

Ooh, yes. Is it Akon?!
Akon! That song “Shake Down” seems to always come on. It is so horrible, but so kind of funny. We’ll be listening to something all good, and all of a sudden it’ll go “CONVICT!” So, “Shake Down” by Akon, but not by choice, by pure laziness of not deleting it from iTunes.

I hope that’s the most played and most embarrassing?
Both. Correct!