But here's why that doesn't really mean anything. 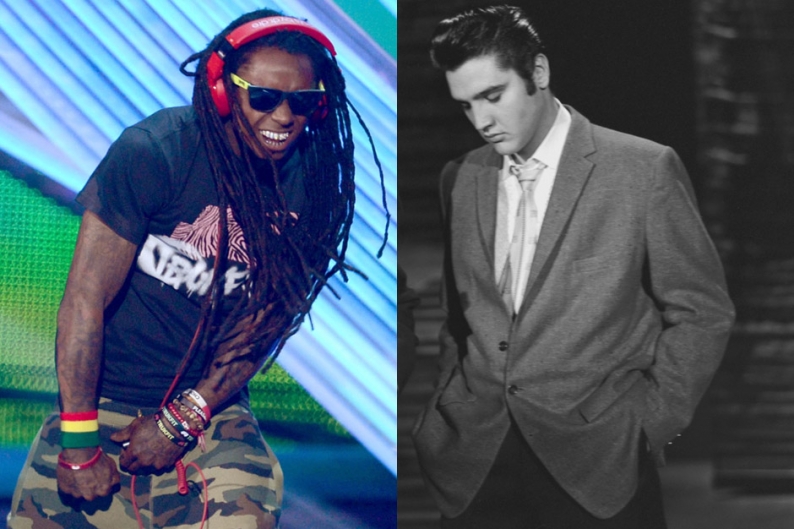 Lil Wayne is positioned to overtake Elvis Presley as the male artist with the most appearances on the Billboard Hot 100 chart, now that he’s tied the King — at 108 times — via his cameo on Juicy J’s “Bandz a Make Her Dance.” The Mike Will-produced ode to cheek-clapping strippers debuted at No. 71 on the chart this week thanks to guest verses from Weezy and self-namedropper 2 Chainz.

No need to get all scandalized, though: The feat isn’t as impressive as it sounds. Presley released 31 jukeboxes-ablazing singles before the Hot 100 was founded in 1958, so none of the tracks from his iconic self-titled 1956 debut apply to the record. That discounts early earworms “Blue Suede Shoes,” “Tutti Frutti,” and “Blue Moon,” plus “Heartbreak Hotel,” “Houndog,” and “Jailhouse Rock.”

And as Billboard reminds us, Elvis plays principal musician on each and every one of his 108 chart-climbers, whereas Wayne takes the lead on just 42 of his Hot 100 entries. Only 2008’s “Lollipop” went to No. 1 for the Young Money ringleader, but Presley notched the top spot nine times. And if we’re going apples to apples here, Elvis had 25 Top 10 songs and ranked in the Top 40 another 80 times, to Wayne’s 17 and 57, respectively.

Further proof of the arbitrary nature of these records: The Glee cast holds the title for most Hot 100 appearances of any act ever, with 204 visits to the chart.