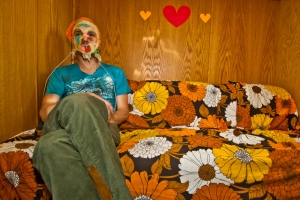 Two-man Providence ecstasy-punx Lightning Bolt changed all the rules when they started producing jackhammer glee-club throttlage in the mid-’90s. They turned horrible noise into body music. They turned a no-budget community of neon yarn artists and art-school Crayola scribblers into the hottest underground scene in America. They flew in the face of San Diego and Gaineville hardcore’s sex/death/wrath themes in favor of cartoon monsters and wonderful rainbows. They took Black Flag’s attempts at breaking the band/audience wall to hilarious extremes by never playing on a stage. They cut right to the heart of what hardcore tries to do — uplift, elevate, transport — without a single discernable lyric.

Geologist: When we were getting into independent music and we moved to New York we’d be like, “Yeah, I like that Tortoise record. Let’s go see those dudes.” And then you show up and they’re wearing blazers or something. And we were still 18 or 19 like “This isn’t us, man.” Bands seemed to be taking themselves too serious. It almost felt like they were acting like adult contemporary artists or something and we were like that’s not what we want. And then we would see bands like Lightning Bolt, you know, people coming down from Providence. It wasn’t punk music but they just acted like these wild punks, you know? These guys have an energy that we can all relate to because this is how we’ve thought about music since we were four years old jumping around. That’s what drew us to music, was that energy. So then that sort of inescapably is linked to childhood and that sort of way you approach the world as a child when everything was a bit more wonderful and exciting.