'To Inspire Bravery. and BREED some m$therf*cking COMPASSION.' 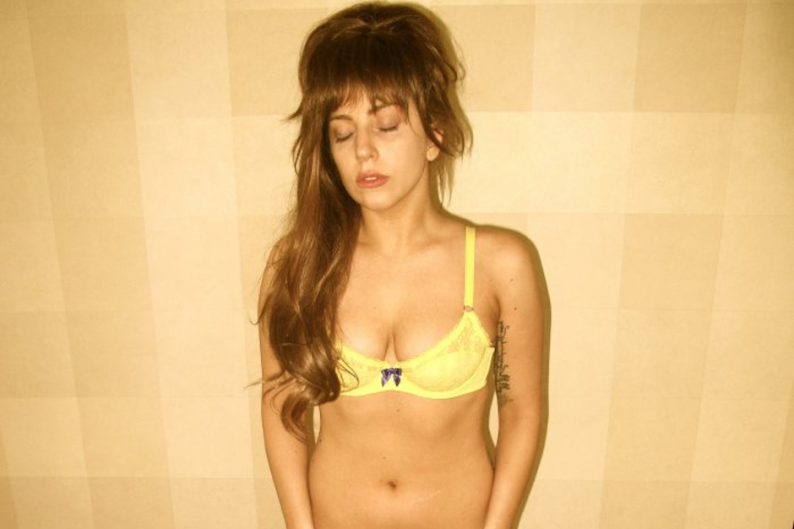 Well, Lady Gaga did say her 2013 album ARTPOP would be a “multimedia experience.” You can tell the singer has hit album-promotion mode because we can’t escape a day without her name in multiple headlines. A quick recap of the Mother Monster’s goings-on lately: She got publicly tattooed and pretended to sleep at the premiere of an inscrutable yet obviously expensive commercial for her new perfume brand. She sparked up some free press from an idiotic New York politician by appearing to smoke weed onstage. She covered her #muslimrage bases and then some by wearing a burqa and fur while carrying a clutch bedazzled with the word “cunt.”

Now, Gaga has started a “Body Revolution” page on her website, posting what she says are unretouched photos of herself (in bra and underwear) and inviting her fans to do the same, as the Hollywood Reporter points out. “Bulimia and anorexia since I was 15,” she wrote in a series of captions. “But today I join the BODY REVOLUTION. To Inspire Bravery. and BREED some m$therf*cking COMPASSION.”

Linked to Gaga’s Born This Way Foundation, the campaign puts a positive twist on another controversy that has cropped up amid the Born This Way Ball tour, this one involving her figure. In February, Gaga visited a $32,950-a-year Los Angeles private K-12 school, where she told students she had overcome bulimia in order to save her singing voice. In April, she joked on Twitter that “#PopSingersDontEat,” prompting confusion from the National Eating Disorder Association.

More recently, in a reversal, Gaga has been in the news for gaining a professed 25 pounds. Tabloids have taken aim at her size, with one gossip website reporting that executives at her record label told her to lose weight (the label, Universal, has denied the reports). Earlier this week, Gaga responded to the rumors by tweeting a photo of Marilyn Monroe, adding: “To all the girls that think you’re ugly because you’re not a size 0, you’re the beautiful one. It’s society who’s ugly.” We were always told it’s what’s inside that counts, so we hope this means Gaga agrees.