Kanye West Brags About Kim, This Time With Jay-Z’s ‘Clique’ 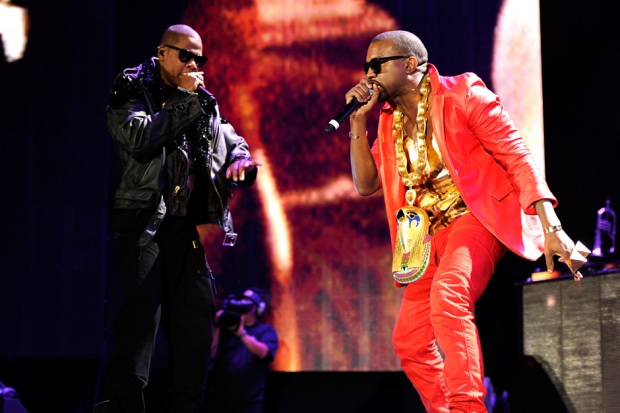 Conspicuous by his absence last night at MTV’s VMAs, but never less than conspicuous, Kanye West chose to cram the unveiling of his latest G.O.O.D. Music single (via Miss Info) into an evening already jam-packed with Rihanna, President Obama, and a rerun of John Candy’s 1985 farce Summer Rental. Earlier this week, West had already unleashed a snippet of Jay-Z and Big Sean collaboration “Clique” wherein he bragged about his similarly conspicuous consort Kim Kardashian’s sex tape, so the full version arrives without much left to the imagination. Big Sean mostly justifies his otherwise eyebrow-raising inclusion via credibly conversational boasts that overcome his unfortunate decision to make us remember the word “pootang,” West’s Throne partner Hova regally mixes up cadences like so many female-pop-star name-checks, and Yeezy coldly defends his “ignant” stance against the imagined predations of Spike Lee. As usual, however, it’d be self-defeating to bet against ‘Ye: Hit-Boy’s hammering, operatic production could credibly play as an instrumental — say, between tracks by TNGHT and Keyboard Kid 206 — and though “Clique” isn’t quite at “Mercy” levels of instant cooptability, you’ll assuredly hear it on umpteen freestyles and remixes. West, like the man most people were watching last night, is nothing if not a skilled campaigner, and his G.O.O.D. Music compilation Cruel Summer is due out on September 18.