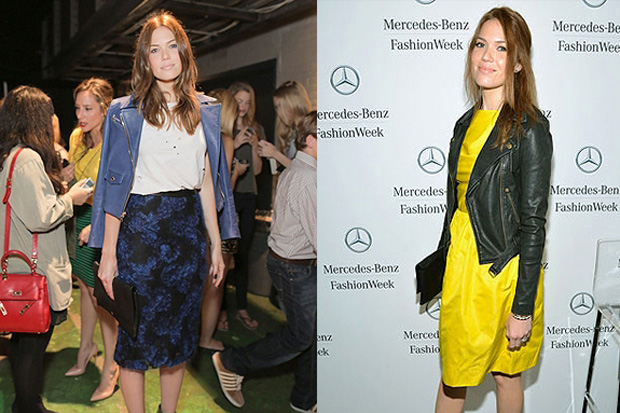 Don’t judge us, but the A Walk To Remember soundtrack might just be on our Spotify playlists. Slash we might be some of the only ones who loved “In My Pocket.” And, don’t even get us started on Saved. The common thread here? One-time Britney Spears rival/sometimes actress/former designer/Ryan Adams-spouse, Mandy Moore, who might not have charted as high as ex-Mickey Mouse Clubbers, but somehow navigated adulthood with a lot more class.

Soft spot for Moore intact, we were pleasantly surprised to see the actress making the Fashion Week rounds, and even more surprised to see our fave Neutrogena girl earning some serious style cred. Maybe we overlooked her at the CFDAs (where she walked the carpet with pal Lela Rose), but it’s been impossible to ignore her NYFW outfits.

So, this isn’t quite a sartorial transformation — after all she’s been under the wise tutelage of stylists Emily Current and Meritt Elliott for quite some time — but it’s certainly an awesome (and crafted) attention-getter. Scoring swe-et front-row seats — and sporting pretty meticulously-planned outfits and flawless makeup and hair — at 3.1 Phillip Lim, Billy Reid, and Boy. by Band of Outsiders (and the aforementioned Lela Rose), plus an appearance at a super-exclusive W magazine party, Moore’s managed to give herself relevancy despite a lack of major projects.

In the vein of Rachel Bilson, Kate Bosworth, Sienna Miller, and Camilla Belle, she might be hoping to be dubbed a style star — and gain the positive press that goes with that mantle, not to mention lucrative endorsements from the likes of Karl Lagerfeld or Stylemint. Indeed, says Emily and Meritt, “Mandy was totally game to have fun and try new things this Fashion Week. We decided to do completely different head-to-toe looks on her from event to event which really kept things interesting.” That’s for sure, girls; if this awesome trajectory continues, we’re thinking an edgy Vogue shoot or a Magnum ad might not be too far off.

The Julie Ruin Surf a New Wave on ‘I’m Done’