From lo-fi and inventive to polished and hip, Brooklyn's indie scene permeated pop's past decade. And its evolution has mirrored the gentrifying area from which it sprung. 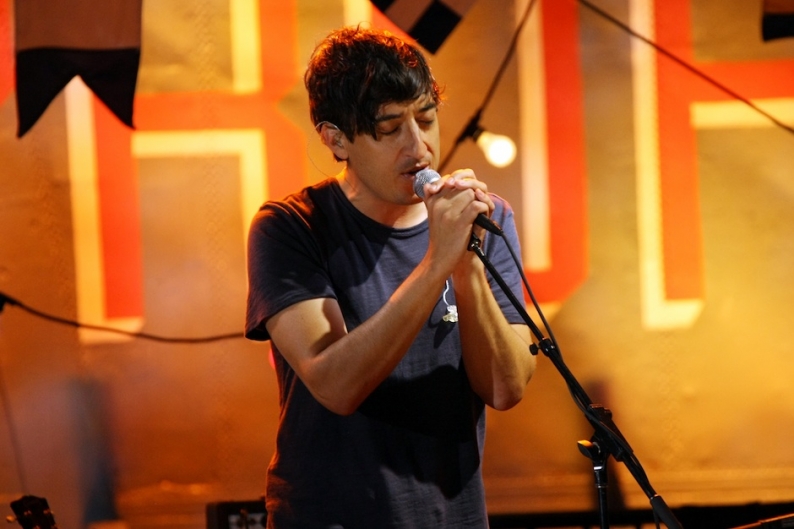 The most important Brooklyn show on TV isn’t Girls — it’s 2 Broke Girls. Starring Norah’s infinite playlist of cupcake jokes and thrift-store field trips, the CBS sitcom offers up intentionally imprecise references that combine to form the tipping point where Brooklyn hipster culture turns into prime-time background noise. Despite the wild success and influence of Brooklyn-sewn youth culture over the past decade-plus, it was never clumsily co-opted and sold back like thuggish-ruggish rapping McNuggets in the ’80s or Daniel Clowes approximating Sub Pop graphics for OK soda in the ’90s. Maybe that’s because the Brooklyn indie scene was born branding itself. The lines between actual cool and companies co-opting cool and cool co-opting companies quickly became a dull, indistinct blur: Where do you file Progressive insurance’s Flo, the Levi’s Go Forth ads, (500) Days of Summer, Vice’s CNN show, or MGMT? Is Mad Men’s Paul Kinsey supposed to be Bedford Avenue’s Fonzie?

The salability of Brooklyn’s arty, contemporary rock was birthed in 2002 with the runaway success of five unlikely goth-surf grind-pop songs by Yeah Yeah Yeahs stealing a spotlight bogarted by the Strokes, those nightclubbing Manhattan old-guard pretty boys. (Conversely, you could say YYYs also saved Brooklyn from the late-’90s holding-pattern rock of Nada Surf, Mink Lungs, and Mendoza Line). The rest of Brooklyn’s decade played itself out on critics’ lists (Liars, LCD Soundsystem, TV on the Radio, Sufjan Stevens, the Hold Steady, Clap Your Hands Say Yeah, Battles), reaching an apotheosis with the most critically acclaimed albums of 2009 belonging to Animal Collective (partial Brooklynites), Yeah Yeah Yeahs, Grizzly Bear, and Dirty Projectors — SPIN’s Nos. 1, 2, 4, and 31, respectively). Three of those four bands have new records dropping within ten weeks of one another — Animal Collective, Grizzly Bear, and Dirty Projectors all seem intent on bigger beats and heartier hooks, stripping their sonic slurry into serviceable rock or dance music, arriving somewhere between avant-indie Project Mersh and Live Nation Daydream Nation. They’ve certainly earned it. Pop radio has been 2 Broke Girl-ing ‘em for years now.

Brooklyn art rock has predicted Billboard pop music the same way punk rock predicted the Knack, Soft Cell, Culture Club, Simple Minds, Guns N’ Roses, EMF, and P!nk. This year, the Hot 100 features a historic two No. 1 hits from bands gentrifying the indie-rock shrugaverse, big-city bubblegum quietly owing to modern hipster runoff. The first, Gotye’s “Somebody That I Used to Know,” has erratic swoops in pitch that echo the Dirty Projectors’ Pollock-like approach to melody. And the second, fun.’s “We Are Young,” is the product of natural sky-punchers who — if they hadn’t absorbed the placid tempos, lush harmonies, and button-down casualness of Grizzly Bear — might have just ended up as post-guyliner casualties.

Vocalist-guitarist Ed Droste insists that Grizzly’s violent, ill-angled, earthy, cloud-busting fourth album, Shields, isn’t some reaction to “Two Weeks” accidentally representing youth gone mild. But there’s only so long you can be pastoral poster cubs for indie pathos and hammock rap. Their trademark curtains of harmonies are long gone, making way for Spanish guitar flourishes, vicious strumming, squawking horns, studio explosions, and rumbling subterranean night-terror drone, all supporting melodies that are more melancholy than ever. Loneliness, wandering, hiding it all away. “A Simple Answer” scans like Richard Dawkins scoring a Frightened Rabbit song: “Just make it up somehow,” “No light,” “You can’t scare me none.” Shit, maybe more metal bands are gonna get hip to ‘em this year.

Dirty Projectors just turned into a metal band themselves on Swing Lo Magellan, a kind of folk-crunging Led Zeppelin–gone-fractal, if the Battle of Evermore had been fought by Arnold Schoenberg instead of Bert Jansch. On 2009’s Bitte Orca, front-pointillist Dave Longstreth fell backwards into R&B through Mali’s chiming guitars, the hocketing techniques of the Congo, the beep-booping disjunction of 12-tone composition, and the alien logic of Planet Dave Longstreth. His melodies randomly leapt from murmur to falsetto like Flubber, sounding like tUnE-yArDs is spelled. And beyond predicting Gotye’s sexy Bobcat Goldthwait routine in “Used to Know,” the Projectors maybe helped portend the cru-u-U-u-UUU-cial earworm in Maroon 5’s “Moves Like Jagger,” the labyrinth of Kelly Rowland’s “Motivation,” and the bounding wee-EEEs of Taylor Swift’s “We Are Never Ever Getting Back Together,” Magellan, they’re still playing melodic Q*Bert, but now they’ve got enough Gnarls Starkey beats and big ol’ hooks and broken En Vogue harmonies and itchy handclaps (part Steve Reich “Clapping Music,” part the Meters’ “Hand Clapping Song”) to be making some pop moOoOoOOOves of their own.

The least likely pop stars of the bunch were also the most prescient. Animal Collective’s “Kids on Holiday” nostalgia-gazing, smushy-wooshy whirlnoise, and Sgt. Petsound’s multi­tracked harmonies produced a No. 2 album and a No. 3 single by bands who weren’t them: MGMT and Foster the People (two bands, it should be noted, who have the word “kids” figuring predominately into their biggest hits). More recently. the Alternative chart-topper “Tongue Tied” by Grouplove has the same jumprope ooze with the lyric “Slumber party, pillow fight.” AnCo cozied up to the hypnotic drift of the waterlogged and tape-damaged and screwed years and years before it was providing chart hits for Snoop Dogg (“Sensual Seduction”), Drake (“Marvins Room”), Frank Ocean (“Nocacane”), and Usher (“Scream”). Hell, they beat Drake to the nostalgia-ULTRA punch line of calling a song “Fireworks,” too.

On their tenth studio album, Centipede Hz, Animal Collective practically leap past the rock audience they’ve curated into the EDM tent across the festival field. From a band featuring at least one former DJ, its 54 minutes unfurl with the cohesiveness of a mix: opening with the bombastic piston pumps of dubstep in “Moonjock,” cycling through some Guetta-gone-Pavement soccer chants in “New Town Burnout,” and peaking with a legitimate drop in “Monkey Riches.” In between, there’s some incredible bongo breaks and RZA-via–Biz Markie knuckle-crack snares. AnCo’s resident sound artist Geologist probably will claim the numerous samples were inspired by Dutch electronic tape music of the ’50s, but they bounce like golden-era hip-hop-centric crossovers M/A/R/R/S or Utah Saints.

So yeah, Brooklyn is dead because all the cool bands want to be pop stars. And all the pop stars wanna be cool kids (Jay-Z asked Dirty Projectors to play his festival, and Metallica invited Liturgy to play theirs). “Edge” once was something you could lose in an LCD Soundsystem song; now Edge is a luxury condo you can buy on the Williamsburg waterfront starting at $1.7 million. No sleep till that!

This story originally appeared in the September/October issue of SPIN.