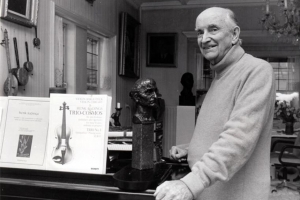 This Dutch avant-garde composer’s fascination with non-traditional harmonies and scales led him to become a pioneer of electronic music. Badings’ earliest work expanded the compositional vocabulary by using octatonic and hexatonic scales, but his music became even more forward-thinking in the 1950s, when Badings began experimenting with electronics. A favored technique of Badings’ was to combine performances by acoustic instrumentation with musique concrète’s manipulation of pre-recorded sounds, often to eerie effects.

Geologist: Musique concrète and 20th century classical and synthesizer music were all lumped in together for us because of horror movies. We were like 17, before we could drive. We would go to this record fair and there was this biker dude who had a lot of psych records but he was also the guy that had a crate that was avant-garde classical, early synth electronic. And we would go to him and ask, “What sounds like this.” I think he was the first to give us Henk Badings or Dick Raaymakers, these Dutch tape musique concrète people. That was sort of the start of thinking of it as music, and not connected to film.