"SNL this weekend. Me and the bro John Mayer." 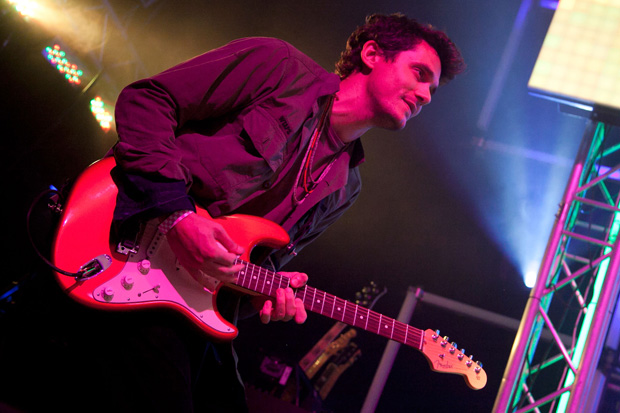 Aside from the ridiculous desert-campfire backdrop, Frank Ocean’s stirring performance of the channel ORANGE stunner “Thinkin Bout You” on last week’s MTV Video Music Awards took what might be called “the Adele route.” Similar to the soulful British belter’s appearance at the 2011 VMAs), Ocean made himself the traditionalist, music-first standout in an evening of garish costumes and would-be David Guetta dance beats. He even swapped out his accompaniment on the song, usually minimalist electro-R&B, for a lone, smolderingly jazzy electric guitar.

This weekend, Ocean will return to NBC, the scene of his much-feted national TV debut a few months ago — this time as the musical guest of this weekend’s Saturday Night Live. And he’ll be bringing with him the 21st-century guru of traditionalist, music-first, smolderingly jazzy electric guitar that still scans as “pop”: John Mayer. As Ocean tweeted today, “SNL this weekend. Me and the bro John Mayer.”

Mayer is officially credited for a guest appearance on channel ORANGE’s spacey, instrumental “White,” an alternate take on a track that originally appeared on Odd Future’s OF Tape Vol. 2. But he also reportedly plays on sprawling single “Pyramid.” And while Mayer’s blue-eyed soul-pop, celebrity girlfriends, and, yes, understandably outrage-provoking interviews have made him persona non grata among much of the audience for what SPIN’s Barry Walters has called PBR&B 2.0, well — let’s just say it’s been clear for some time that he and Ocean share a similar, storytelling-based songwriting sensibility. Plus, dude could totally rip on “Thinkin Bout You.”