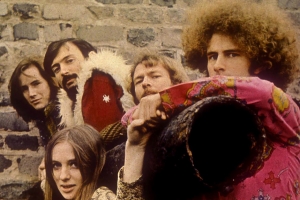 A 1960s psychedelic rock band from San Francisco, if by “rock” you mean a band that also counted a theremin, fuzzbox components, a cardboard tube, and a speaker from a WWII bomber among its instrumentation. They covered Billie Holiday’s standard “God Bless the Child” as if a UFO were landing inside the song. They released one headfuck of a studio album, 1967’s Cauldron, which also threw musique concrète, electronic dread and jazz noise into the mix. They gigged with Chuck Berry and Blue Cheer before disbanding and/or teleporting back to Mars.

Avey Tare: That goes back to Brian and I hanging out in our dorm room; wanting to relate musique concrète to rock; hearing that somebody like Syd Barrett got into that stuff through AMM. We just started trying to search out records, read Forced Exposure, look for any inkling of “use of electronics in psychedelic music.”

Geologist: We’d go into Kim Recprds’s and just ask, “What records are like psych-rock music but use musique concrète?” Sometimes they would tell us a really shitty one. Not this one.