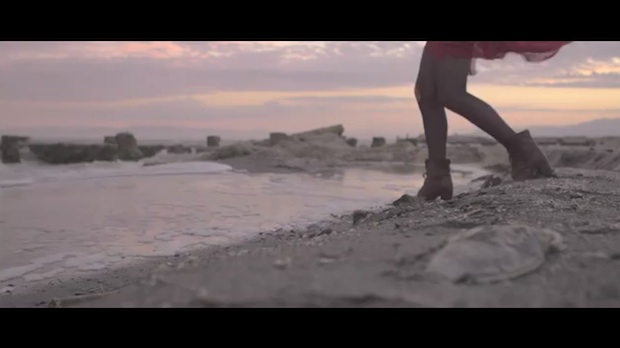 “The Island Universe is a solitary space that every human being is stuck in individually,” says Feeding People’s 19-year-old singer Jessie Jones. “The idea in the song is that I want to create an Island Universe with another person — either the listener or a lover — so that we can share the same feelings and things.”

It’s a lovely sentiment, and the Los Angeles group’s new single “Island Universe” is a breezy, catchy nugget of ’50s-flavored pop, but there’s a just perceptible darkness that lurks in Jones’ delivery — a tinge of creep that suggests that any other occupants of that special space might not end up there of their own free will.

She and bandmate Louis Filliger play off of this dichotomy in the Dick Thompson-directed video for the song, which hails from the just-out EP of the same name, courtesy of rising L.A. powerhouse Innovative Leisure. The clip was filmed at author Ray Bradbury’s old house and sports a curious narrative of its own.

“It’s supposed to be a fantasy that’s happening in my mind,” Jones continues, “but by the end, it’s pretty real. We kill them.” The “them” in question is the couple central to the short, who appear to be caught up in a fatal love triangle the consequences of which are carried out by Jones and Filliger.

Feeding People have one LP out on the eternally awesome Burger Records, and plan to drop their next one by early 2013. It’ll be produced by Hanni El-Khatib and Crystal Antlers member Jonny Bell. Says Filliger: “The rest of our songs are hard psych rock, but when I wrote this one, I imagined driving down the highway late at night and hearing ‘My Girl,’ something classic.”