Matt Korvette talks to the well-dressed Manhattanite about Fashion Week, his favorite designers, and what he's wearing in the booth 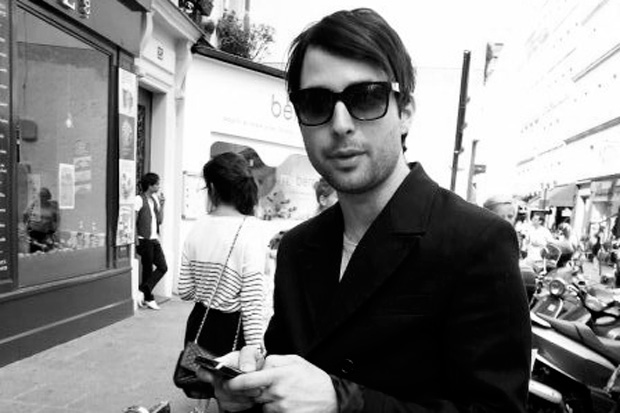 Trying to figure out cutting-edge designer fashion is the same as trying to figure out Killed By Death punk rock, German minimal techno or no-wave film — in order to get started, it really helps to have a guide. In my case, I bridged the gap between, um, the Gap and Ann Demeulemeester thanks to DJ Mike Nouveau. Now, I’m not going to say that Manhattan’s premier fashionisto DJ ever willingly guided me toward anything, or really did anything but insult my choices along the way, but without some of his sharp musings or crucial nuggets of info, I very well might not be striving for the peculiar Star Wars-goth aesthetic I’m currently working on. The first time we met, I was awkwardly trying on a pair of pants he sold me inside of a cramped van. He stood outside while I struggled, complimenting the fit, going on to DJ parties attended by Damir Doma and Miley Cyrus (sadly not in the same night). I recently picked his brain regarding the most important things in life — fashion and music — and he explained that he doesn’t consider his style to be too feminine. He only wears the occasional skirt or skort, after all.

So let’s get started. How was Fashion Week?
In Paris? It was fun.

More fun than usual, or the same-old same-old?
Same-old, which is fun, though. It was a while ago at this point, and I can’t really even remember the collections, so I guess nothing was too spectacular. It’s fun just being there with all of my friends.

Do you recall the last collection you saw on the runway that really blew you away?
Hmm, maybe Rick Owens’ Crust collection in F/W ’09, for men at least. Women’s shows are usually more mind-blowing.

It’s really been that long? Three years? Are designers just less exciting, or was there just something special about that collection and moment in time for you?
I think maybe the last two seasons or so haven’t been particularly exciting, but maybe my tastes have changed a bit, too. That collection was the first time Rick had shown a men’s collection on the runway in years, so it was cool to see. I feel like that was when the men’s collection started veering a little closer to the women’s collection, which I liked.

In your personal style, you don’t seem to fear more feminine shapes and cuts. What draws you to that sort of look?
Well, I don’t know if that’s true, except for the occasional skirt or skort. Other than that, I don’t think I wear anything feminine.

I’m talking long shirts, skirts, skorts. Don’t you think a lot of the longer Rick Owens stuff has kind of a feminine air?
I think you can wear the same clothes in different ways and give it a different feeling.

Would you describe your personal style in any one way? Or are you always changing?
People who don’t know what they’re talking about like to say I dress “goth,” but I don’t think that’s true at all. I wear a lot of black, but I also wear grays, browns, and pale shades. Also, I feel like I’m pretty consistent. There are only a handful of designers that I actually wear, which makes shopping easier/more boring.

Why do you limit the designers that you wear?
I don’t limit, there’s just less and less stuff that I like. I’ve become way pickier I guess.

Picky is good. So let’s talk about your DJing career. Did that come before or after your interest in fashion?
I’d say during. I had always been interested in fashion, but I didn’t have any money back then, so I just did what I could.

Is there any common fashion misstep you see a lot of people making, when you’re out at a club? Anything that if you could point a finger and stop it from existing, you would?
Not so much a misstep, but I just don’t usually see fashionable people in nightclubs at all. I see a lot of people in H&M and Forever 21. I guess you can say the same about New York as a whole. People think NYC is very fashionable, but really, 99 percent of it is disposable fast fashion.

I know you DJ all around the world. Has there been any particular city or crowd you played to that blew you away, sartorially speaking?
Not really, but Paris is always good for that. Or even NYC during Fashion Week. I think the average person living in Paris has better style, though. It’s hard to say.

Is there any living person you’d consider a style icon? Someone you look up to, in a way?
Some of my friends influence my style, that’s for sure. No one famous, really. I mean, Alain Delon and Cary Grant, of course. I appreciate how they dress, but it’s not like that influences the way I dress.

What influences you most, then?
The designers, I guess. They are the ones making the clothes; it’s their vision. I’m just buying into it, really.

At what point did the premise of like, $400 pants not seem crazy to you?
A while ago. There comes a point where you just start to understand why things cost the price they do. You want a product made in Italy, with nice fabrics, made in a limited run, shipped to the US through customs, and sold with a 3x retail markup — it’s not cheap. I mean think what kind of fabrics H&M are using, and what construction methods they are using, in order to be able to sell $15 pants.

Was it intimidating to become more of an active participant in fashion, and learn about how things are made, meet the designers, and so on? How did you get to be a part of it?
Hmm… well, I don’t know if I really am a part of it. It wasn’t a conscious thing.

Meeting designers? DJing their parties, attending runway shows? That seems way more involved than your average internet shopper.
Well I guess when you’re into fashion, and your friends are into fashion, and you DJ fashion events, these things kind of just happen. Really anyone can talk their way into shows if they want to.

Now I don’t believe that. You are a man with something to say.
I’d like to see more originality all around. Everyone is always biting someone else, and I’m like fanatical about this stuff so I can usually catch the “influences” the second they’re on the runway.

Who would you say is the most “original” designer putting out collections today?
I’d say the designers whose influences are the least obvious, or the ones who are really creating their own world. Rei Kawakubo, Rick Owens and Yohji Yamamoto come to mind. I’m into designers with their own universe, like Paul Harnden. He’s basically just making jackets and pants, so it’s not frightfully “original,” but he’s definitely created his own little world.

Do you think wearing a sick outfit helps you as a DJ? Is it possible you wouldn’t be in the same mindset if you were wearing H&M and J. Crew while playing for a crowd?
I doubt very much that what I’m wearing affects my DJing.

Really? You don’t think you’d feel less confident? Imagine if you had to DJ while wearing Levi’s denim shorts.
No one would see it, I’d be in the booth.

You should give it a try.
Nah, I have enough clothes in rotation right now. I’ve got a lot of great stuff that never gets worn.

How do you rectify that? Do you find yourself going to the same faves over and over again?
Sometimes, yes. Also, it’s fucking hot in New York City, and I travel a lot, so it’s just easier to not bring so much, or wear the same stuff a lot.

What’s the best way to look good while beating the heat? I think it’s a lot harder to look good in 100 degree weather than 0 degree weather, even.
Yes, of course. I wear a lot of Damir Doma’s light pants and Comme des Garcons shorts, skirts, skorts and culottes. Harnden is harder to do in the heat. I mean, I do it anyway, but it’s not always enjoyable. Lots of jackets and heavy wools.

It’s worth suffering if you look great, right?
I don’t even necessarily think that I “look great.” I think the average non-fashion person wouldn’t think I looked great. At this point, this is my life, and this is what I want to wear, and it sounds cliché, but how someone else thinks I look is the least of my concerns. As long as it’s a look, I’m content. I just want to wear nice shirt that’s made with attention and care, [nothing] mass produced, [something] I don’t see every other person in the street wearing.