16 Fall Festivals You Need to Know, From ACL to Voodoo

A rundown of autumn's most magestic musical extravaganzas 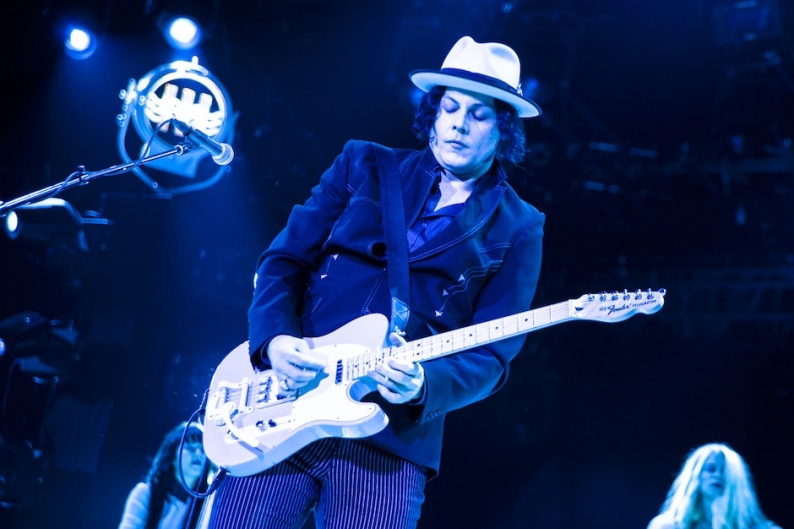 People still refer to “the festival season” like that’s a thing. Used to be massive music meet-ups mostly took place in the summer, but these days you can find a park full of dirty bands and dirtier fans just about anywhere, anytime, in any town with a population above 80,000 and a proclivity for parties. (Or on a boat, but we’ll save the cruise ship rundown for another day.) With autumn officially kicking off on Saturday, September 22 — in the midst of a particularly fest-saturated weekend — we’ve done our due diligence so that you don’t have to. From Voodoo to Virgin, EDM to UMO, urban wonderlands to island outposts, behold the 16 essential festivals of fall 2012.

What: Boomslang
Where: Lexington, KY
When: September 20 – 23
Who & Why: “A celebration of visionary, experimental, genre-bending music and media of the highest caliber” led off by some premium excellence: Neutral Milk Hotel’s Jeff Mangum, Das Racist, the Jesus and Mary Chain, Deerhoof, and Cloud Nothings, not to mention rare performances from legendary doom metal band Saint Vitus and circuit usurper Oneohtrix Point Never. It’s a multi-venue fest, meaning it takes place in town, and includes film, workshops and more.
How Much? $70 for the whole shebang!

What: I’ll Be Your Mirror
Where: Manhattan, NY
When: September 21 – 23
Who & Why: The Afghan Whigs’ Greg Dulli curates this installment, which features such impeccably tasteful choices as Frank Ocean, composer Philip Glass with ex-Battles bro Tyondai Braxton, nü-folkist Jose Gonzales and electronic project Emeralds. And it’s on a Pier, in a rad building tucked in between the Manhattan and Williamsburg bridges. Plus: Godspeed You! Black Emperor, the Roots, Hot Snakes, Mark Lanegan Band…
How Much? $199 for all, $60 – $75 per day.

What: Decibel
Where: Seattle, WA
When: September 26 – 30
Who & Why: Another venue-hopping event but with an electronic bent, this is the rare computer-friendly fest that really, truly, honest-to-God isn’t a rave. The lineup shines top to bottom, from Orbital, DJ Shadow, Kimbra and Erykah Bady’s Cannabinoids band to up and coming beat geniuses like Baths, Shlohmo, Houses, Tycho, and LOL Boys. What’s more, there are boat parties, live re-scorings of films, interactive multimedia art, and brilliant visuals everywhere you go.
How Much? $215 for five days.

What: Counterpoint
Where: Atlanta, GA
When: September 27 – 29
Who & Why: It’s on an “8,000-acre paradise with well-established rolling pastures, lakes, and woodlands that run 12 miles along the Chattahoochee River.” And you can camp here. Do you even need to look at a lineup? If you must know, these guys specialize in serious beats, with a mighty array of bill-toppers including Bassnectar, Skrillex, Avicii and Pretty Lights. It’s a diverse group from there, wrangling everyone from M83 and Toro y Moi to Big Boi and Crystal Castles. Awesome.
How Much? $185 all in.

What: Midpoint
Where: Cincinnati, OH
When: September 27 – 29
Who & Why: Multiple venues ranging from outdoor stages to pubs and clubs. More than 180 bands. Wildly diverse: Grizzly Bear, Andrew Bird, Sleigh Bells, Here We Go Magic, Unkown Mortal Orchestra, Janka Nabay and the Bubu Gang. You likely won’t find more bang for your buck, and after 11 years, they’ve just added an independent film festival which runs concurrently.
How Much? $69 for three days.

What: Culture Collide
Where: Los Angeles, CA
When: October 4 – 7
Who & Why: Okay, you might just get a little more bang per buck with this one. The wristband is dirt cheap ($5 a day!) and the lineup is pretty buff: Of Montreal, the Big Pink, Zola Jesus, the Wombats, Niki and the Dove, Patrick Wolf unplugged, and then there’s Dean Wareham doing Galaxie 500 songs. This street fest takes over L.A.’s arts-friendly East Side, spanning a ton of venues and emphasizing an international musical heritage. Like, one love, brah.
How Much? $20 for four days!

What: Hardly Strictly Bluegrass
Where: San Francisco, CA
When: October 5 – 7
Who & Why: Because you should listen to more than chill wave, trap rap and garage rock… every so often. This fest’s name is on point. While there’s an emphasis on the folksier side of life — with such heavy-hitters as Dwight Yoakam, Cowboy Junkies, Patty Griffin, Buddy Miller, and Jimmy Dale Gilmore — there are plenty of gateway artists, so to speak, from Elvis Costello to the Dirty Three to Heartless Bastards to a Conor Oberst-curated all-star band featuring Jenny Lewis, Simone Felice, Ben Kweller and members of Beachwood Sparks. All in the rolling greens beneath the picturesque Golden Gate Bridge. Oh, and it’s…
How Much? FREE.

What: Virgin Mobile FreeFest
Where: Columbia, MD
When: October 6
Who & Why: So your punk rock morals won’t let you attend an event put on by a massive corporation, but what’s more punk than paying zero dollars to see a sampler platter of marquee artists across multiple genres for zero dollars. Jack White, Nas, Skrillex, Ben Folds Five, M83 and more, plus a reunited Dismemberment Plan (!) and freaking ZZ Top, the rubbernecker of the bill. And it all goes down at the actual Merriweather Post Pavilion, the wooded amphitheater immortalized in indiedom by Animal Collective.
How Much? Zero. Zip. Zilch. Nada.

What: Austin City Limits
Where: Austin, TX
When: October 12 – 14
Who & Why: Because it’s an institution and the perfect park-centered, easygoing alternative to the drunken scattershot mania of SXSW. These guys keep it classy, with a lineup that’s topped by the Black Keys, Jack White, Florence + the Machine, Neil Young and Crazy Horse and, well, Red Hot Chili Peppers. You’ll find folksier entires like the Avett Brothers and Umphrey’s McGee, but also odd ducks like dance dude Avicii, reggae icon Barrington Levy, and PR&B pourer the Weeknd. Only one problem…
How Much? It’s kinda sorta sold out.

What: Treasure Island
Where: San Francisco, CA
When: October 13 – 14
Who & Why: For one, it really is on an island. The tiny little hunk of land is in the middle of the San Fran Bay, reachable only by bridge and escaped inmate (word to Alcatraz). There’s some rich history here, but if that’s not your thing, well, there’s the music: Girl Talk, the xx, Public Enemy, Best Coast, Joanna Newsom, Matthew Dear, Toro y Moi, Youth Lagoon, Grimes, Ty Segall. Naturally, the list goes on. Transit can be tricky, but the setting is rare.
How Much? $129.50 for everything.

What: CMJ Music Marathon
Where: New York, NY
When: October 16 – 20
Who & Why: Five nonstop days and nights. More than 80 venues. Approximately 1,300 musical acts. Plus panels, seminars, Q&As, parties, meet and greets, mixers, and anything else you can imagine (this is NYC, after all). Like SXSW, this somewhat industry-aligned has become a massive fan destination too. It’d be insane to start listing off bands (well: Foxygen, GZA, JJAMZ, Mansions, Poolside, Sea Wolf) and kinda pointless too: this is the place to go to discover the shit you ain’t heard yet. Be brave.
How Much? $149 for a five-day ShowPass.

What: City Arts Fest
Where: Seattle, WA
When: October 17 – 20
Who & Why: Well, David Byrne and St. Vincent, for one. And then, because this fest organizes its performers into mini bills by venue, there’s Slowdive’s Neil Halstead performing with Tiny Vipers and Case Studies, and a crazy multi-culti rap fest starring Collie Buddz, Zion I and Los Rakas. Sheesh, and Mars Volta’s Omar Rodriguez-Lopez playing with (probably literally) the totally badass Crypts. These guys emphasize art too, and this is the Pacific Northwest, so come prepared to get crafty.
How Much? Four days starts at $55.

What: Moogfest
Where: Asheville, NC
When: October 26 – 27
Who & Why: Primus 3D, bro. Okay, maybe not that. But Moogfest is a different beast, as it celebrates the legacy of pioneering synth man Robert Moog. That means Orbital, Four Tet, Squarepusher, and Thomas Dolby are perfectly at home here, but there’s also room for other innovators in different fields: Nas, El-P, Santigold, Explosions in the Sky, Julia Holter. All told, it’s a tasteful bunch doing what they do best nestled within the beautiful Blue Ridge Mountains. Great destination fest considering the city’s relaxed atmosphere and hippie-fied country culture.
How Much? $125 for everything, $65 – $75 per day.

What: Voodoo
Where: New Orleans, LA
When: October 26 – 28
Who & Why: Because you could spend Halloween camping out in a park in Nawlins. If this idea titillates more than it terrifies you, you should probably sign up. This fest has a rep as one of the most musically diverse in the game. They’ve got the dance: Skrillex, Kaskade, um, Bootsy Collins. They’ve got the rock: Green Day, Jack White, Silversun Pickups. They’ve even Die Antwoord. But they also have “Le Flambeau,” an entire area devoted to the Big Easy’s hometown sounds, and “Le Carnival,” which pairs indie bands with burlesque dancers and circus acts. Get hexed.
How Much? Three days for $175.

What: Fun Fun Fun Fest
Where: Austin, TX
When: November 2 – 4
Who & Why: The name doesn’t lie. FFFF puts together an annual lineup decidedly lacking in snoozers. This year’s highlights? Run-DMC, Refused, Dwarves, Edward Sharpe and the Magnetic Zeros, A$AP Rocky, Girl Talk, Dillon Francis, Santigold, Public Image Ltd., Against Me!, Fucked Up, Wavves, Danny Brown… The four stages are split up by style, which kinda sorta minimizes the chance of running up against a major conflict. It also means that there’s an entire section devoted to punk, hardcore and other furious strains. Oh, and there’s a comedy area headlined by David Cross and Hannibal Buress. Fun!
How Much? $175 total, or $75 per day.

What: HARD Day of the Dead
Where: Los Angeles, CA
When: November 3
Who & Why: This replacement to HARD’s Haunted Mansion sports an expanded lineup of heavy-hitting beat fiends, ranging from the aggro electro-house of Justice to Aussie dubsteppers Knife Party, to dancehall destroyers Major Lazer. And Dia De Los Muertos is a far creepier holiday to celebrate than boring old Halloween, evidenced by this fest’s preview trailer featuring a corpsepainted mariachi band covering Simian’s “We Are Your Friends.”
How Much? $70 – $75, or $125 for VIP.