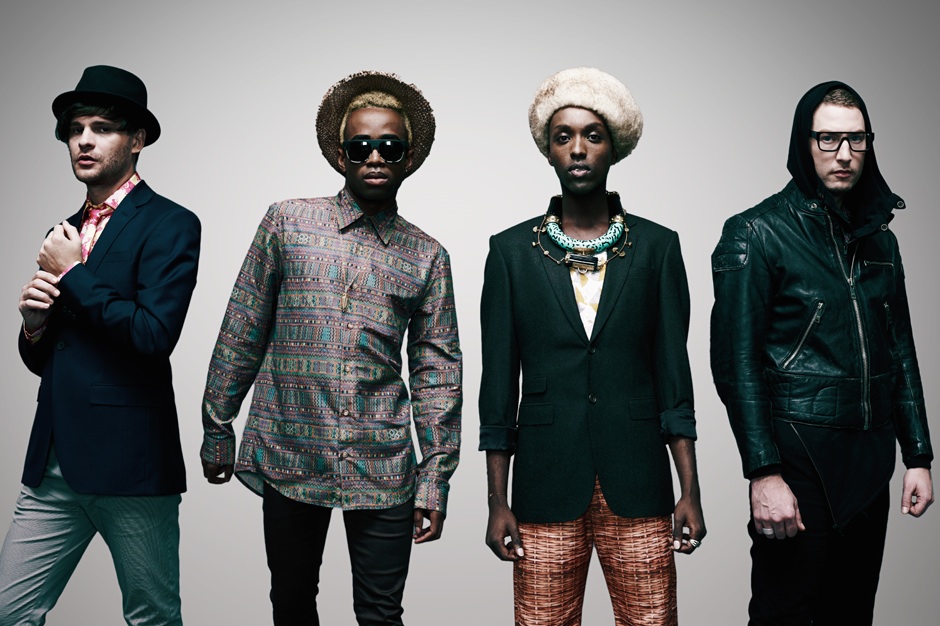 Steve Aoki’s Dim Mak label announced this week that it will re-release Azari & III’s self-titled debut album at the end of October. The Toronto group’s stylish, resolutely classicist deep house is something of an odd fit for Dim Mak, which has built its brand on electro-house overload, cartoonish cover art, and Aoki’s cake-throwing, crowd-rafting antics; the signing suggests that Aoki is interested in expanding the scope of his label to include more self-consciously grown-up styles. (We like to think that it also suggests Aoki paid close attention to SPIN’s top 50 albums of 2011.)

Dim Mak’s press release claims that the signing will make the album “available for the first time in North America,” but that’s something of a fudge. Released by London’s Loose Lips label in Europe and the U.K., the album came out on this side of the Atlantic on Tiga’s Montreal-based Turbo label — which, last time we checked a globe, definitely lay within North America. Dim Mak’s release will mark the album’s debut on iTunes U.S., although the Turbo edition of the album is currently available to U.S. customers on Beatport.

The signing is a savvy move on Aoki’s part. Dance-music sales continue to be dominated by brash electro-house and big-room fusions of dance pop and progressive house, Dim Mak’s stock in trade, but more cosmopolitan strains of deep house have recently been making inroads into the mainstream. In the past year or so, a number of smoother, slower songs, with a palpable veneer of island-hopping sophistication, have made their way into the Beatport Top 10 — like, for instance, Maceo Plex’s “Can’t Leave You” (Crosstown Rebels), Miguel Campbell’s “Something Special” (Hot Creations), Alexis Raphael’s “Spaceship” (Hot Waves), and Hot Natured’s “Forward Motion” (Hot Creations) — where they’ve jostled elbows with ravier chart mainstays like Avicii, Afrojack, Eric Prydz, and the rambunctious Aoki himself. Signing Azari & III’s crowd-tested take on retro-leaning vocal house allows Dim Mak to connect with listeners who may have outgrown glow sticks and stage dives — a way for Aoki to smash his cake and eat it too, if you will. (How the band’s fans will greet the news is another question. When Azari &III posted a photo with Steve Aoki on Facebook earlier this summer, negative comments outweighed positive reactions by a two-to-one ratio.)

Coinciding with the album’s October 30 release, Azari & III will be hitting the continent this fall as part of the Sónar North American Tour, an eight-city tour put together by Barcelona’s Sónar festival that also features Die Antwoord, Seth Troxler, Paul Kalkbrenner, Tiga, Gesaffelstein, and Nic Fanciulli. The lineup, heavy on techno and house, and with South Africa’s Die Antwoord as rabble-rousing art-pop outliers, is slightly surprising for Sónar, which bills itself as a festival of “Advanced Music and Multimedia Art” and has built its reputation on a careful balance of big-room raving, left-field pop, and experimental electronic music. Conspicuously absent is any kind of bass music, which is particularly surprising given Mary Anne Hobbs’ close collaboration with the festival over the past five years, using the Barcelona weekender to help break artists like Skream, Flying Lotus, Joker, and Blawan. Still, at a moment when the domestic market is dominated by commercial EDM, the tour represents a progressive proposition, if a cautious one — a chance, perhaps, for the Catalan organization to determine how “advanced” North American tastes currently are.

Check the Sónar on Tour website for cities and dates.