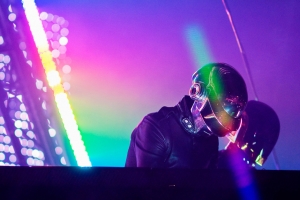 Daft Punk’s music — a harder, better, faster, stronger, wittier take on space disco — may just be the most important sound of the 2000s. But it was the duo’s bigger-than-music approach to performing that solidified their reputation. Live shows leaned heavily on visuals like a giant pyramid, giving the show a feeling more akin to a gathering than concert. Think: A Dead show for millennials just learning to shake their butts, which hey, also describes an Animal Collective show. Not to mention AnCo’s ODDSAC wouldn’t exist without Daft Punk’s experimental full-length films, Interstellar 5555 and Electroma paving the way.