The only thing less likely than Chuck Taylor All Stars' rise to rock-accessory ubiquity is the fact that people used to play basketball in them. We canvas the game-changers who made it happen. 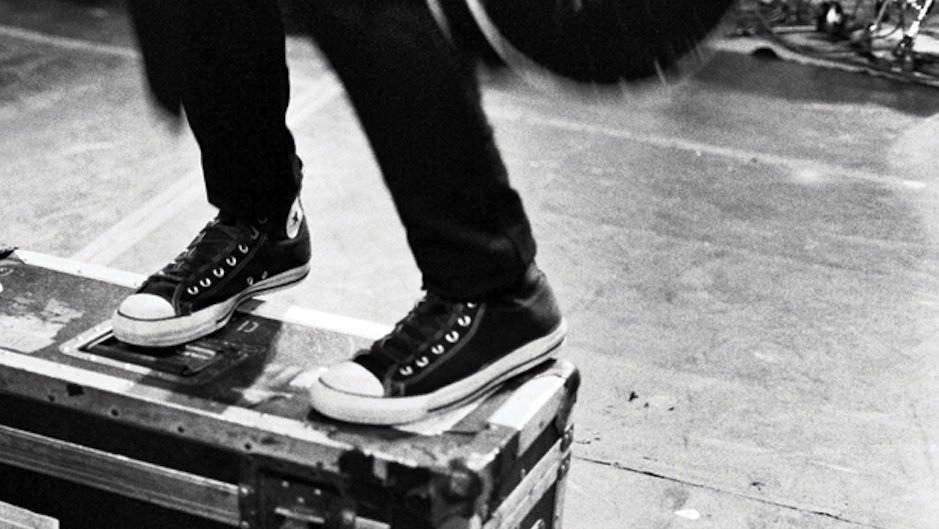 IV. Someone said that Chucks are like T-shirts for your feet.

DAVID MADDOCKS (Converse chief marketing officer, 2001–07) Converse was being run by sporting-goods salesmen. They didn’t think of Chuck Taylors as a consumer brand. They thought of the shoe like they were selling basketballs. So when I and some other new people came in, we thought a lot about Nike, who absolutely dominated Converse. What was the difference between them and us? When you bought Air Jordans, you were taking on the personality of Jordan. When you bought Chucks, you wanted to be unique. We wanted to market to that idea. Who is the ultimate symbol of being unique? Rock stars. Who was wearing the shoe? Rock stars.

JOHN VARVATOS Converse got a bit lucky in the early 2000s. At the same time that ownership was changing and the company had a new influx of capital, these young garage-rock bands like the Strokes were coming up with the classic rock’n’roll look, wearing Chuck Taylors. That helped. And something that no one really talks about either is that skinny jeans got popular in a big way in the 2000s, and Chuck Taylors looked great with skinny jeans. Hipsters helped save Converse.

ALBERT HAMMOND JR. Just like [the Strokes] did with our music, we took bits from the past to make up our own style. I saw Robert Pollard wearing Chuck Taylors in a Guided by Voices video and thought they were the coolest thing ever. Before that, I used to wear Reebok Pumps. Actually, the bigger reason I got into Chucks was that I met this girl in a bar and my pickup line was that I was a filmmaker and I wanted to film her. So I spent all the next day filming this beautiful girl, and she told me I’d look good in a pair of red Chuck Taylors. I immediately went and bought some.

DAVID MADDOCKS We were sitting in a meeting one day, and someone said that Chucks are like T-shirts for your feet. You’ve got to remember that the company did five core colors for 60 years: black, white, navy, red, and natural. High-top or low-top. When we had that T-shirt insight, it was like, “Holy fuck. We can make thousands of versions of the same shoe.” Nike bought us two years later.

DENNIS RODMAN I tried to get my million dollars back when Nike bought Converse, and they were like, ‘Sorry, dude.’ I don’t even have a pair of Rodmans anymore.

ALBERT HAMMOND JR. [The Strokes] were pretty conscious of wanting to look a certain way. We wanted people to recognize us as being in a band when we walked down the street, even if they didn’t know which band we were. Chuck Taylors signaled that.

ELLIOT CURTIS Converse had [Miami Heat guard] Dwyane Wade till 2009. Then he switched to Nike. I don’t think they have one NBA endorser anymore. They’re a lifestyle brand.

DAMON DASH When I see someone wearing Chuck Taylors, I feel like I’m seeing someone who isn’t that cool but wants someone else to think they are. Shell toes are the real fly shit.

Obviously, Kurt wasn’t around to say yes or no to that particular endorsement. Good thing his estate needs more money.
—Mark Arm

GEOFF COTTRILL When Converse celebrated our 100th anniversary in 2008, we did a Ramones shoe. We did a Kurt shoe. We did a Clash shoe. [Since 2008, Converse has also done Chuck Taylor collaborations with, among others, the Grateful Dead, the Doors, Black Sabbath, the Who, Pink Floyd, Ozzy Osbourne, Blondie, Jimi Hendrix, Janis Joplin, AC/DC, Metallica, Gorillaz, the Edge, Billie Joe Armstrong, and M83.]

MARK ARM Obviously, Kurt wasn’t around to say yes or no to that particular endorsement. Good thing his estate needs more money.

GEOFF COTTRILL We wanted to make our connection to music clear. That’s how we started the “Three Artists. One Song” project. We thought that lots of people had brought two artists together. But three? So we got Pharrell, Julian Casablancas, and Santigold [to record “My Drive Thru”]. Musicians are our core. We’ve embraced that.

ALBERT HAMMOND JR. Art needs money to exist and shoes need cool to sell. It’s hard to sell records. If someone pays for you to record a cool song, like Converse did with Julian, is that weird? Maybe, if you have a fantasy about the financial realities of the music business.

CHEETAH CHROME It’s a different era. Would the Sex Pistols or Ramones have taken money from a big company when they were still making music? Would we have wanted our songs to be “brought to you by Brand X”? I don’t think so. Everything is a commercial now. For these younger artists, the idea of not selling out is an abstract thing.

ANDREW W.K. I have no integrity, so I was fine with everything. [W.K. recorded “I’m a Goner” with Soulja Boy and Matt and Kim for Converse in 2011]. Converse is in an interesting position. It’s like when Pabst Blue Ribbon realized that hipsters were drinking their beer, and they started marketing to hipsters, and now maybe it’s not as cool. Whenever a brand positions itself to mean something to people, they risk losing people who don’t like to be marketed to.

TAVI GEVINSON (fashion blogger, editor-in-chief of Rookie) Girls are drawn to [Chuck Taylors] because on one hand they’re a symbol of rebellion and on the other hand they’re classic and American and give a feeling of normalcy. They’re a not-huge-commitment way to try on that kind of rock’n’roll personality, which is a very natural thing teen girls tend to do, like dyeing their hair. I got my first pair in first grade. I remember I drew something mortifying on them, like, I don’t know, Good Charlotte lyrics.

GEOFF COTTRILL We want to do something that will last. We don’t slap our name on a festival. Our philosophy is “own don’t rent.” With labels being what they are, and studios being expensive, we thought the best way we could serve musicians was to open a studio. Rubber Tracks opened up [in Williamsburg, Brooklyn] in 2011. Any band can apply. It’s free. It’s a great studio. The bands can record whatever they want. We think of it as giving back to the people — musicians — who have given so much to make Chuck Taylors what they are. [Rubber Tracks] is not a loss leader.

AKIE BERMISS (singer-keyboardist, Aabaraki) We were the first band to go through the application process and record at Rubber Tracks. We got about five tracks done in one seven-hour day. Did it change our careers? No. Was it great to have access to an awesome studio? Definitely. I can’t say I had strong feelings about who was footing the bill. I’ve owned Chuck Taylors. If it was the “Smith & Wesson Studio,” maybe I would’ve thought twice.

ANDREW W.K. Converse is causing a situation where there is more creativity in the world than there would have been without them. It’s hard to find fault with that.

ICE CUBE That company can do whatever they want. They just can’t fuck with the original Chuck Taylor colors. They get rid of those — I’m out.