II. The only running we did in Chuck Taylors was from the cops.

MARKY RAMONE (drummer, the Ramones, 1977–83, 1987–96) You gotta understand, the Ramones were greasers. We were Fonzie with longer hair. The greasers and gangs in Brooklyn all wore Chuck Taylors and leather jackets. Either you copied basketball players or you copied greasers. 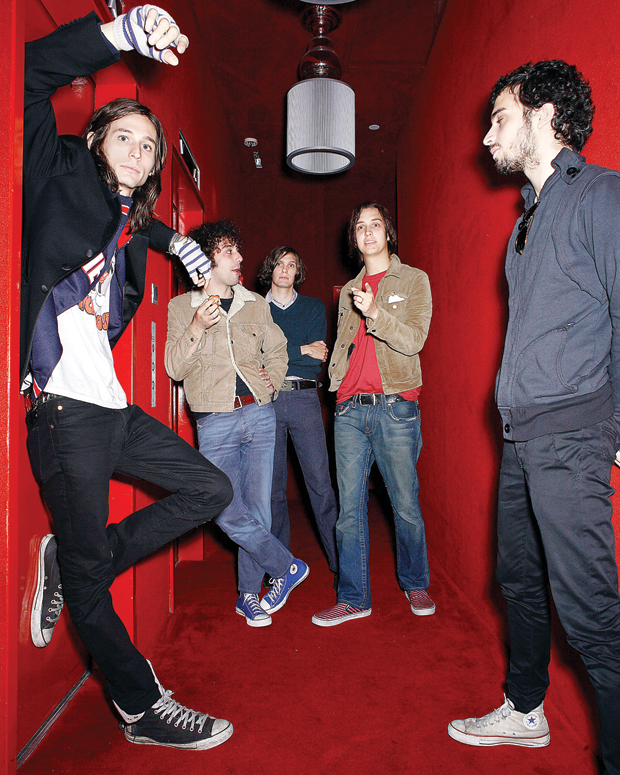 ALBERT HAMMOND JR. (guitarist, the Strokes) The first band that I think of as wearing Chuck Taylors is the Ramones.

GEOFF COTTRILL (Converse chief marketing officer) There’s a reason we have photos of the Ramones in the office. Bands like them and Nirvana are part of the Chuck Taylor DNA.

JOHN HOLMSTROM (illustrator) I have no idea why I drew Joey wearing shoes that looked like Chuck Taylors. I probably just had a pair lying around my room.

CHEETAH CHROME (guitarist, the Dead Boys) PF Flyers basically went out of production, so all the misfits started wearing Chuck Taylors. Chucks were so much easier to get. In New York, you could find them at Army-Navy, at drug stores, pretty much anywhere. I liked pointed-toe shoes, but those were expensive and we were poor as shit. It’s funny, back then you’d see guys playing basketball in ’em all the time, and we weren’t necessarily the biggest fans of jocks. The only running we did in Chuck Taylors was from the cops.

MARKY RAMONE Dee Dee and I switched over to the Chuck Taylors because they stopped making [the style of] U.S. Keds and Pro-Keds [that we liked]. A lot of sneakers look orthopedic — Chuck Taylors don’t, and they looked good with the Perfecto black leather jacket and Levi’s. Joey never wore them. He needed a lot of arch support and Chuck Taylors are bad for that. Johnny wore Reeboks. I could feed you a bunch of shit, but that’s the truth.

ARTURO VEGA (the Ramones’ “artistic director”) Chuck Taylors had that retro-trash-Americana thing, and punk-rock style was all about going back to the ’50s and pretending hippies didn’t happen.

CHERIE CURRIE (singer, the Runaways) Joan [Jett] always wore them. Chuck Taylors didn’t look pretentious or ostentatious. They weren’t glittery or glammy, and they were for men — which she ignored. So did a lot of other women after her.

MARKY RAMONE Immediately, it became, “Oh, the Ramones wear Chucks, so we should wear them.” Sid Vicious you’d see in New York at CBGB or the Chelsea Hotel with ripped-up Chuck Taylors. When we went to England, I met Joe Strummer and gave him a pair. He wanted something American and they didn’t have those shoes in England. You’d see everyone in the crowd wearing them. Fans would always want us to sign their sneakers. I’d hold the shoes up to my face and stick my nose in ’em and make believe they smelled bad. Sometimes they did. I’ll tell you, though, once the Ramones disbanded in 1996, I switched to Jack Purcells. Chuck Taylors gave me blisters.

III. Chuck Taylors were for the freaks and geeks. We wanted to sell a wholesome shoe.

DARRYL “DMC” McDANIELS (rapper, Run-DMC) The rise of sneaker culture killed Converse in the ’80s. Sneakers were aspirational. Hardly nobody in the NBA was wearing old-school Chuck Taylors in the ’80s. You had Puma, Adidas, Nike. Chucks got old-looking fast. All these other companies had the shell toes, the fly colors, the cushioning. In New York, no one was looking for canvas shoes. It’s not an accident we called the song “My Adidas.”

ELLIOT CURTIS (“Sneakerology” lecturer, cofounder vitaminTHICK apparel) Converse didn’t have a vision of what sneaker culture could be. Reebok was quicker to embrace the jogging and aerobics craze. Adidas had a big hip-hop connection because of Run-DMC.

DAMON DASH (cofounder Roc-A-Fella Records, Rocawear) Shell toes, I just wanted those Adidas shell toes. Chuck Taylors were one step above skippies. You know what skippies are? Skippies are what we called cheap-ass shoes.

ELLIOT CURTIS The Nike Air Jordan came along in 1984 and everybody was playing for second after that. Converse had Magic Johnson and Larry Bird through the early ’90s, but Michael Jordan was the beginning of the end for them as a basketball shoe company. Shoes became high-tech in the ’80s. There’s no more low-tech shoe than the Chuck Taylor. Converse didn’t have a vision for how to adapt.

JOHN O’NEIL (Converse marketing manager, 1983–97) We always thought of ourselves as an athletic shoe company. Maybe too much, frankly. The Chuck Taylor was the foundation of the company, but we didn’t want to position the product in an angry way. Chuck Taylors were for the freaks and geeks. We wanted to sell a wholesome shoe. We were more Beach Boys than Van Halen, and we didn’t understand rap culture at all. 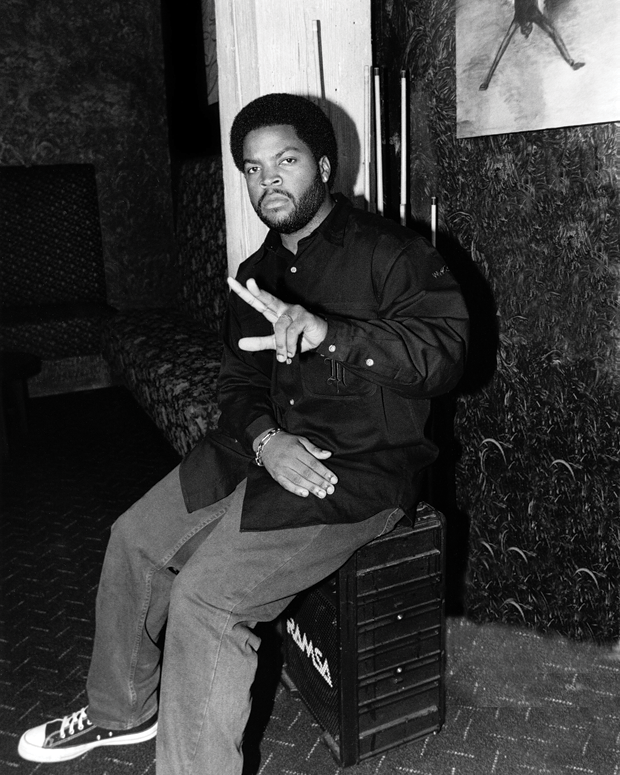 ICE CUBE Growing up in Compton [Los Angeles] in the ’80s, I started wearing Chuck Taylors by watching my older brothers, my friends, my uncles. All the gangbangers wore Chuck Taylors. They were what they made you wear in the prisons and Youth Authority camps. You’d see all these gangsters going to the surplus stores and buying Chuck Taylors because they looked good with a pair of khaki pants and a T-shirt. You could spend $60 and look fresh. Black Chuck Taylors worked with that raw, hard-core street feel that N.W.A wanted, even if some people were more into Jordans and shit.

ARABIAN PRINCE (N.W.A, 1986–88) Crips would wear blue Chucks or white ones with blue laces. Bloods would wear red. That’s the OG hood way. N.W.A liked being different — we knew they weren’t popular on the East Coast, where people were wearing the big, space-boot basketball sneakers. Dre and Cube even did a song that made fun of “My Adidas.”

ICE CUBE Yeah, we had a little fun. I don’t want to get into that.

ARABIAN PRINCE Cube changed it to “My Penis.”

ELLIOT CURTIS Converse kept trying to compete with Nike and it never really worked. Bird retired in ’92. Magic stopped playing in ’91. It took the company years to make the connection between Chuck Taylors and any kind of outlaw image. Then the way they did it was to sign players like Latrell Sprewell and Dennis Rodman as endorsers. One choked his coach and the other wore women’s clothing. Converse had no idea how to market Chucks in an organic way. That’s not to say they didn’t try.

DENNIS RODMAN I got my signature shoe when I was with the Chicago Bulls. That’s when the team was rock stars and Dennis Rodman was just starting to become “Dennis Rodman,” dyeing my hair and doing crazy things. The shoes were a Dennis Rodman version of a Chuck Taylor, with one of my tattoos where the normal star patch was. I put a million of my own dollars in equity into them. I did some things while wearing them I can’t tell you about. I partied hard in those shoes. One time in the locker room, Michael says to me, “Nice shoes.” If you know Michael, you know Michael doesn’t say nice things.

DICKY BARRETT (singer, Mighty Mighty Bosstones) As far as I know, we were the first band to be in a Chuck Taylors ad. Tim Burton, the Bosstones’ saxophone player, was working during the days in a studio in Cambridge [Massachusetts] and Converse was filming a shoe commercial in the same studio. This was ’92, ’93. Someone mentioned to Tim that they were looking for a band to be in some commercials. Tim said, “Hey, we terrorize Boston,” and they let us try out. So they filmed us running around in plaid suits and Chuck Taylors. We had no money, so we were happy to be in an ad. I’d been told the ad was gonna show during this hot new cartoon called The Simpsons. I was working the night shift at a bank, and when it was time for the ad to come on, I ran over to a bar where all these old drunks were watching the Red Sox. I tell them to turn on this cartoon and they all yelled, “Put the Sox back on, you idiot!”

ELLIOT CURTIS The Rodman shoe did well in the short term, but Converse was floundering. People like Kurt Cobain were wearing Chucks as a lifestyle shoe, but because the company wasn’t exploiting that music connection.

MARK ARM (singer-guitarist, Mudhoney) Everyone in Seattle — Eddie Vedder, Kurt — we were all punk and hardcore fans. So it wasn’t really an aesthetic choice to wear Chuck Taylors; it’s just kind of what you did. The reason, I think, we wore them is that it was either those or Doc Martens, and if you wore Doc Martens and jumped into the crowd, you could really hurt someone. Though doing anything in Chuck Taylors didn’t feel that great either. You know, when I heard Converse was going bankrupt, I went out and bought a couple boxes of Chuck Taylors because I thought I wouldn’t be able to get them anymore.

DENNIS RODMAN Converse went bankrupt [in 2001] a couple years after my shoe came out. I lost my million.