U.K.-based collective explains itself in a statement to SPIN 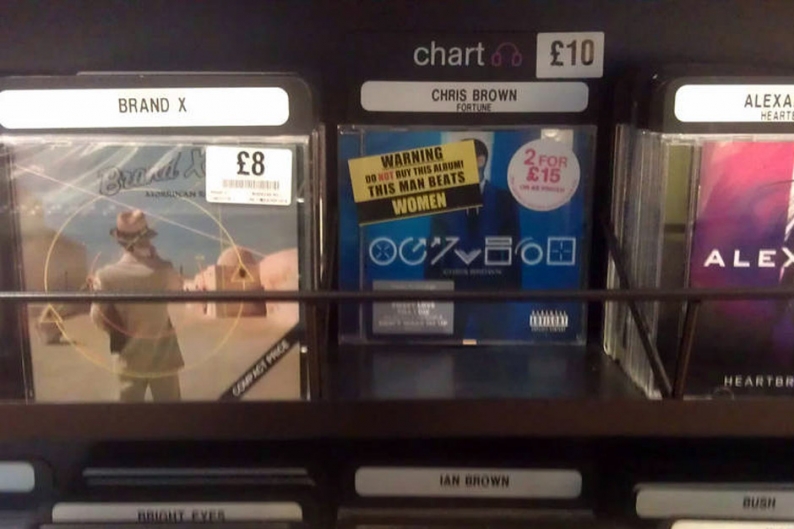 A group of U.K.-based protestors launched a campaign against Chris Brown last weekend, plastering his Fortune CDs in HMV stores with a sticker reading “WARNING: Do not buy this album! This man beats women!” days after the star was criticized for showing off a new tattoo that resembled a battered Rihanna. Despite the fact that their efforts may have boosted sales of the R&B singer’s albums, they’ve set their sights on another target: John Lennon. NME points out that the stickers appeared on the late Beatle’s 1970 solo debut Plastic Ono Band at an HMV in Cambridge over the weekend, as well. (Lennon was accused of abusing the women closest to him in the 2008 biography John Lennon: The Life by Phillip Norman.)

The guerilla group, which is “always recruiting” and goes by the Twitter handle @abusesticksout, explained their actions in a statement to SPIN:

“We live in a society that splits an abusive man’s actions from his public persona. With one in four women experiencing domestic violence and, on average, two women being killed in the U.K. by abuse each week we want to make these abusers stick out. Society ignores their abuse. We won’t. We are going to sticker every album and film made by abusers that we can.”

Begging off further questions, a representative for the collective said its members have full-time jobs or other responsibilities and “none of us are in charge.”

They did, however, point SPIN toward their next potential targets — who happen to extend beyond the music industry. A “shit list” post on feminist blog Feministe lists actors Charlie Sheen, Mel Gibson, and Woody Allen, but we wouldn’t be surprised if a Michael Fassbender or Sean Penn DVD is the next to get hit. While the post on Feministe is short, it has racked up a massive number of comments.

How long before these stickers make it across the pond? Better question: How long until they come in scratch-and-sniff?