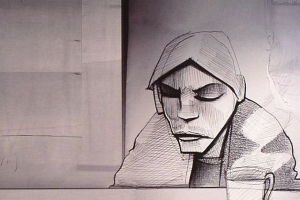 Before dubstep became an Americanized behemoth, it was British, bass-heavy, flirted with ambient atmosphere, and took its sweet time with build-ups and breakdowns. This was all best exemplified by Burial’s 2007 album Archangel, which coated doleful dubstep in rainy synths and foggy drums. He emphasized the dub more than the step, and, like Lee “Scratch” Perry, picked up good vibes music and dropped it into more menacing territory. When an AnCo show oscillates wildly between fun and fear, it owes a bit to this mysterious U.K. producer.