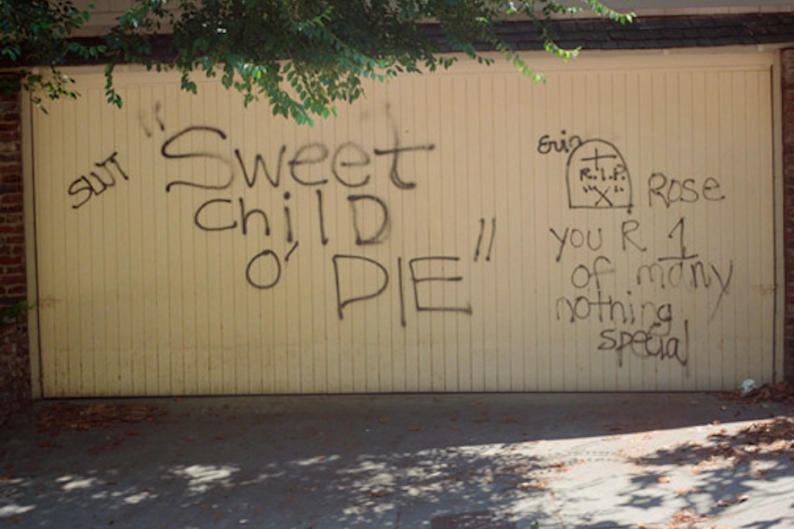 Laura London, a Los Angeles-based photographer, has said she lived near Axl Rose in the Laurel Canyon neighborhood during the late ’80s and early ’90s, when he was with wife Erin Everly. The Guns N’ Roses’ frontman’s tumultuous relationship with the daughter of the Everly Brothers’ Don Everly is a matter of public record — they were married less than a year — and in a 2009 interview with Stay Thirsty Media, London said she snapped a photograph of graffiti Rose put on his garage after a fight. After filing the photo away for years, she said, she got the idea to create “a whole new series of images and portraits, constructed just inspired by that image.”

London is set to display her series in a new solo exhibit titled “Once Upon a Time…Axl Rose Was My Neighbor,” opening September 29 at downtown L.A.’s Coagula Curatorial. Rose, it appears, isn’t happy. According to TMZ, Rose’s lawyers fired off a cease-and-desist letter to gallery curator Mat Gleason calling London’s statements about Rose “absolutely outrageous, false, fabricated, and highly defamatory.” The letter continues, “Mr. Rose never spray-painted anything.” Anything?

The letter demands that Gleason post an apology and retraction on the gallery’s website and cancel London’s show. The letter also demands that Gleason “refrain from further defaming Axl Rose” and “remove the defamatory remarks from your website.” The latter Gleason has evidently done, because the website no longer contains the offending quotes from London.

According to Rose’s lawyers, the website had quoted London as saying: “Axl Rose was having a fight with his wife at the time, Erin Everly, and spray painted graffiti of lyrics of one of his most popular songs ‘Sweet Child O’ Mine,’ twisted into sick poetry and instead wrote ‘Sweet Child O’ Die you R 1 of many nothing special.’ I looked at the graffiti and shot a roll of film to document it, even though it is not my usual style of image making. It was just too weird to pass up.” The website also allegedly said that an “Exhibit” will contain “documentary photographs of a circa 1990 graffiti vandalization of the residence of Erin Everly by her then-husband Axl Rose.”

A couple of thoughts: Boy, was this cease-and-desist letter counterproductive! Most of us would never have found out about the exhibit without it. But also, is anyone else still depressed to find out that Rose “never spray-painted anything”? Nothing at all? It’s a bit like finding out there’s no Santa Claus. Or learning the mayor of “Paradise City” was Rudy Giuliani. Appetite for Milquetoast?