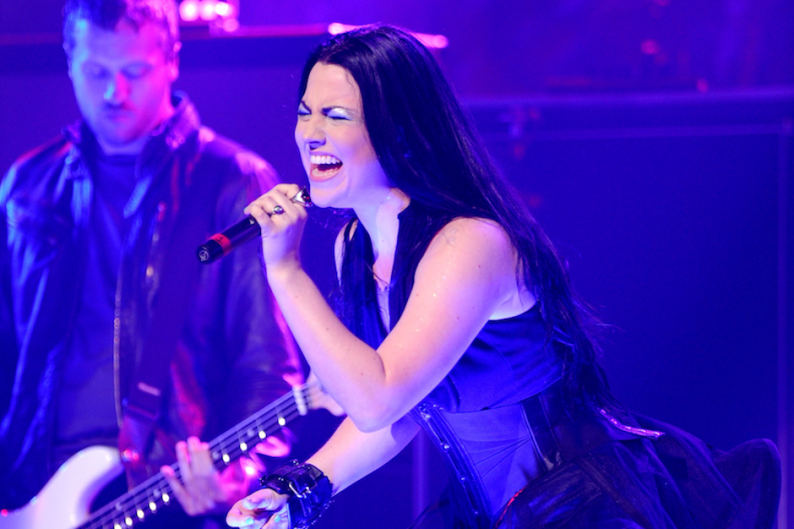 Since the release of Evanescence’s self-titled third LP last year, Amy Lee and Co. have been making glossy videos, like their own for “My Heart Is Broken,” and touring the world. Currently, they’re headlining the Carnival of Madness tour, with support from Chevelle, Halestorm, Cavo, and New Medicine (dates below), and in advance of their Columbus, Ohio, date, Lee sat down for an interview with Mike Jones of the radio station X106.7. After getting past some sort of awkward moments about Jones wanting to hear stories about “you and Lzzy [Hale, Halestorm’s frontwoman] just hanging out, talking, doing girl things” in the back of the bus, the interview turned up some interesting tidbits.

One is that Lee someday hopes to score a movie soundtrack. “It’s a dream of mine,” she said. “But that’s a huge undertaking… I have to get in with somebody who can let me tag along and watch or possibly help or just let me watch the first time around before throwing myself into that completely.” The idea isn’t totally out of the question either since, she adds, “Before we got signed, I was in school for theory and composition and hoping to go down that road if the band didn’t break.”

Something that could keep her adequately occupied obviously would be recording more music with Evanescence. In the interview, she hints that she wouldn’t mind experimenting with some nontraditional formats in the near future. When the interviewer praises the LP Evanescence for being cohesive and an engaging whole-album experience, Lee countered, “I’m starting to change my mind about that being essential to every single project. [Making a record] is a huge undertaking, especially the way we’ve done it in the past… It means recording 18 songs and whittling it down to the ones that will actually make the album.”

Her solution, it seems, is embracing digital music. “This is the future,” Lee told the interviewer. “Maybe we’re moving to a place where it could be cool to do something else — like five songs, just do a digital release only, and it’s easier to move on to the next single quicker.”

The whole interview is available for streaming here: