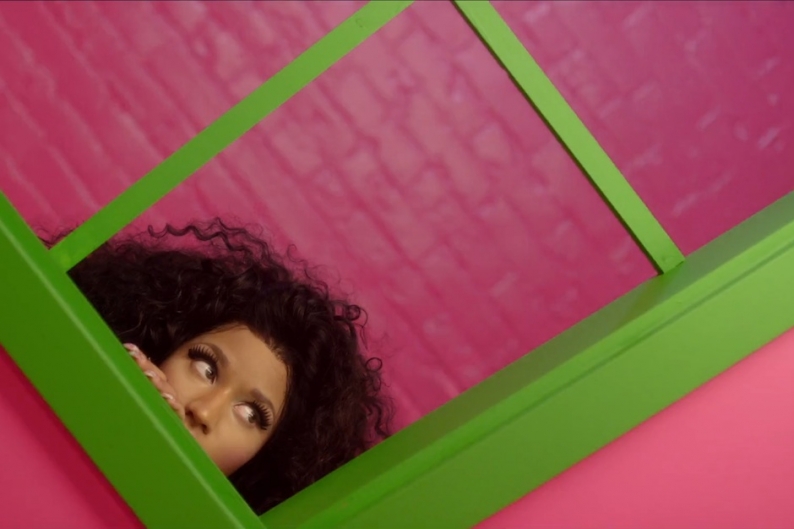 The candy-colored dream world of the new Nicki Minaj video for “I Am Your Leader” might just convert a few believers. And, well, “If you’re not a believer,” she says in the chorus, “suck a big dick.”

For the clip, directed by Colin Tilley (Justin Bieber, Wiz Khalifa), Nicki has constructed a pink, green, and gold alternate universe that only she, Rick Ross and Cam’ron inhabit. It’s almost as colorful as her carnival surroundings in her “Pound the Alarm” clip… but with a lot more bawse.

Minaj — who’s wearing short shorts, a corset and quite the blowout — dances on a zebra-skin rug and in between puke-green antlers. The video shows nunchucks before she says “nunchucker” and so goes the rest of the clip, which flashes sometimes hard-to-process eye candy rapidly across the screen. She raps from a giant pink hand with green fingernails, weird dinosaur skulls clutter her walls, Cam’ron and Rick Ross stand like bodyguards as she shakes her booty underneath a newly found officer’s cap. A green-haired Minaj wears thigh-high sparkly boots while taking a bubble bath. And the crazy part is that the tiling in her bathroom has pink grout! There’s also a scene of a Minaj-displaying TV in a tub, which is, you know, just dangerous.

The whole thing is like the weirdo monochromatic funhouse mirror of late ’80s music videos like the Jets’ 1988 video for “Rocket 2 U or Squeeze’s 1987 video for “Hourglass,” as filtered through a David LaChappelle photo lens.

As the video progresses, Rick Ross’s tracksuit gradually opens until he’s completely shirtless, showing off his uncountable tattoos for his verse in a gold-colored room that matches his chains. For Cam’ron’s verse, the ever-Purple rapper delivers his lines on a green staircase with purple walls, as his shirt changes colors and a poster on the wall oozes green slime (and he didn’t even say “I don’t know”).

But, considering all of this, the most disturbing (or maybe eye-popping) part of the whole video is at the end when Minaj sings the entire chorus, dick line and all, staring at the camera without blinking. It’s almost as creepy as her new perfume’s femme-bot bottling. Watch below and see if you’re a believer!