Various Artists, ‘Just Tell Me That You Want Me: A Tribute to Fleetwood Mac’ (Hear Music/Concord)

Home » New Music » Reviews » Various Artists, ‘Just Tell Me That You Want Me: A Tribute to Fleetwood Mac’ (Hear Music/Concord)

Does our intimate knowledge of Fleetwood Mac’s internecine drama enrich our experience of the band’s music? Or does the excellence of that music endow that drama with the weight of real meaning?

Those questions swirl like Stevie Nicks’ windblown shawl around Just Tell Me That You Want Me, a new 19-track Fleetwood tribute album assembled by big-shot Hollywood music supervisor Randall Poster. He’s the guy who selects the songs that soundtrack Boardwalk Empire and movies by Wes Anderson and Martin Scorsese; he also oversaw last year’s Rave on Buddy Holly, which found Paul McCartney, the Black Keys, and Cee Lo Green toasting the rock pioneer in time for what would’ve been Holly’s 75th birthday.

Like that disc, Just Tell Me That You Want Me — pegged, one presumes, to a promised 2013 tour by its honorees — demonstrates the impressive breadth of Poster’s contact list. It opens with a pair of indie-guitar legends (Lee Ranaldo of Sonic Youth and J Mascis of Dinosaur Jr.), then moves on to Swedish electro-goth star Lykke Li, alt-country weirdo Bonnie ‘Prince’ Billy, and the grizzled English singer Marianne Faithfull, who might be the only artist here with a credible claim of having influenced the members of Fleetwood Mac, rather than the other way around. Put it this way: You’re supremely unlikely to hear another album this year with room for both avant-cabaret warbler Antony Hegarty and ZZ Top boogiemeister Billy Gibbons.

Several of these far-flung luminaries pay their respects lovingly enough. Lykke Li channels Nicks’ tragic imperiousness in a reverb-rich “Silver Springs,” while the New Pornographers — whose own hydra-headed approach to singing and songwriting explicitly recalls the Mac’s — zip through “Think About Me” with a crisp power-pop economy. And if any cover has ever made me wanna hit up a slept-on Secretly Canadian indie group’s Bandcamp page, it’s the winsome rendition of “Gypsy” offered here by Santa Barbara’s Gardens & Villa. 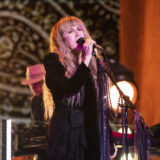 Other highlights make a fairly convincing case for the late-’60s/early-’70s version of Fleetwood Mac — the English blues band that did its studious neo-trad thing long before Nicks and Lindsey Buckingham came aboard and steered the ship toward soft-rock Sodom. Jamming with young-gun guitarists Blake Mills and Matt Sweeney, Gibbons croaks his way through “Oh Well” like, um, the dude who croaked his way through “La Grange”; Trixie Whitley, from Daniel Lanois’ great psych-soul outfit Black Dub, similarly ravages “Before the Beginning” with a killer assist from guitarist Marc Ribot. Near the end of the record, the Entrance Band — a trippy L.A. freak-folk group that may well buy mescaline from Mick Fleetwood’s old hookup — do as well as anyone could with a number called “The Green Manalishi.”

Beyond these cuts, Just Tell Me starts to fall apart, and not for a lack of marquee names. Sometimes it’s a misguided musical adjustment, as in Best Coast’s ghastly major-key “Rhiannon,” which turns Nicks’ eerie ode to a Welsh witch into a dumb-ass Ben Folds Five song. (This is particularly frustrating given the swell job Bethany and co. did with “Storms” on a recent seven-inch.) Later, the Kills wreck “Dreams” — probably the Fleetwood Mac-iest song of all — thanks to a clanging industrial-punk riff that totally robs the tune of its glazed sensuality. There’s no stillness of remembering; there’s no rain washing anybody clean. There’s no Fleetwood Mac, really.

Which should maybe be OK, right? The album’s press notes explain that Poster “encouraged every artist to make each song their own,” and that’s certainly a promising mandate — one Antony lives up to in his disarmingly naked take on “Landslide.” Way too often, though, the tribute-payers fail to replace what they remove with anything even half as compelling. Take Karen Elson’s “Gold Dust Woman,” which the former Mrs. Jack White recorded with help from Beck. Does she hit the right notes? Sure. Is the ghost-folk groove handsome? Of course. But her performance reveals nothing about who Karen Elson is or how the song applies to her existence. She’s like the Taio Cruz of faux-Appalachia.

And that, more or less, is the problem with this thing. Fleetwood Mac connected with listeners because their perfect songs enclosed personal imperfections — they created an illusion of glossy best-coast living, then punctured that illusion with brutal truth. Hardly anyone on Just Tell Me That You Want Me summons that friction. They’re just borrowing crystal visions, telling other people’s sweet little lies.