She had no pants on and he wouldn’t let her come look for her pants.
—Jenevieve Cosner

“You’re paid to be the responsible designated driver,” says Rogan. “You can’t be part of the party.”

It hasn’t always been this way. Bobby Barrett got his start in the business in the mid-’70s, when he was living on a commune and helped build a bus for Joe Cocker. His first job was driving for Nick Lowe and Dave Edmunds’ Rockpile. “In the old days, you used to hang out with the artists a little more,” he says. “First night on the Rockpile tour, at the kick-off party, I met a girl and blah blah blah — I got off to a good start. Nowadays, they frown on drivers hanging out with the band. They expect you to disappear to your hotel room.”

Of course, as Barrett himself admits, the overall levels of debauchery on the road have dropped over the years. “It used to be a lot wilder in the ’80s,” he says. “The alcohol and drug consumption was much higher, and the number of women floating around was a lot higher too.” Rogan, who began driving in the early ’90s, has noticed this change, as well. “Bands get on the bus, they might have a couple of beers, but for the most part, they’re drinking tea and have a humidifier to keep their vocal chords moist,” he says. “People eat health food, work out. These days, a blender on the bus isn’t for daiquiris, it’s to make protein shakes. I like it better. No one wants a drunken, coked-up imbecile chewing your ear off all night while you’re trying to drive.” 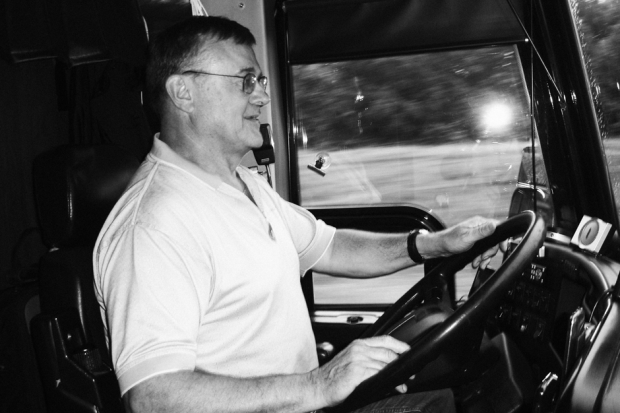 Which isn’t to say that today’s drivers don’t bear witness to some epic buffoonery. Barrett had the lead singer of a band kick out his bus’ massive front windshield during a drunken temper tantrum. Gillis has been detained at the Canadian border after customs officials found drugs on his bus. One driver told me about how members of the band Hinder like to hang their nutsacks out the window, and sometimes get so drunk that they piss themselves in their bunks.

Drivers become very adept at dealing with the chemically impaired, whether that means talking them out of irrational fits of rage or coaxing them into their bunks late at night. Kitterman has done plenty of both, but says more drastic action is sometimes required.

“One instance, I was coming into Dallas with one band on a Sunday morning,” he says. “The guitar player, who was just a full-blown functioning alcoholic, came through the pocket door with a beer in his hand. He’d been drinking all night. He started crying and fell over on me while I was driving down the interstate. Then he gripped the wheel. It was like he had a death wish. I put my hand in the middle of his chest and pushed him off. He doubled over and fell in the stairwell, which is where the rest of the band found him when they woke up, because he couldn’t get himself out.”

Jenevieve Cosner, who works for Arizona-based Bordur Coach Leasing, has driven Matisyahu (“One of the kindest people I’ve ever met”), OK Go (“Fun, artistic and energetic”), They Might Be Giants (“Clean, quiet, and they’d have these really interesting, intellectual conversations.”), and Asking Alexandria (“My crazy little brothers”). The fact that she’s young and female adds a whole other dimension to the job.

“Everyone always asks me if bands hit on me, and they don’t, really,” she says. “I always end up being like the little sister or the bus mom, more of a platonic role. A lot of times it’s great because they need a girl’s advice. They’re sitting up front at night and I’m hearing an earful about relationships. But sometimes I’m a babysitter. I have come back to a bus one time where I had a boyfriend and girlfriend on the bus who were outside screaming at each other, a guy sitting on the ground crying, and someone else passed out. I had to round everybody up, talk everybody down, get everybody on the bus, be their confidant, their friend.”

Cosner estimates that if there are roughly 800 full-time tour bus drivers working in this country, she is one of about 12 women in the job. That gives her a unique and sometimes uncomfortable window into a touring universe that has traditionally been a boys’ club. “One of the things I have the hardest time with is seeing girls not making good decisions,” she says. “One girl, the tour manager kicked her off the bus in the morning. She had no pants on and he wouldn’t let her come look for her pants. I felt bad, so I went out, got a pair of my sweatpants and talked to her a bit, like, ‘What are you thinking getting on a bus that’s going to be in a different city in the morning with no plan to get home?'”