[Creed] thought they were such a big deal. Fuck every minute of that!
—Ben Kitterman

Few people either within the music industry or outside it have a very accurate picture of what a tour bus driver’s job actually entails. When I meet up with Jason Dotson, a thin, soft-spoken 41-year old, in April, he’s working for the alt-country band Lucero. He’s been driving buses ever since he made the transition from trucking in 1998. During that time, he’s worked for Metallica, Radiohead, the Dixie Chicks, and ‘N Sync (“All these 12-to-16 year old girls would show up at the hotel before you arrived — thousands of high-pitched screams.”).

“A lot of people think that driving is an easy job,” Dotson says. “‘Oh, you just sit up there, hold the steering wheel, having a good old time.’ But anyone that’s driven any amount of time knows that driving is not just physically demanding but mentally demanding. You’re driving a $700,000 bus. You’re concentrating the whole time. You’re carrying people. I can’t screw up. It’s a lot of responsibility.”

Providing a band with a smooth ride, free of sharp turns and unexpected pit stops, isn’t just a matter of comfort. Good drivers get work because band members trust that they can go to sleep at night knowing they’ll wake up in one piece. Ben Kitterman knows this better than most, having driven for Tom Petty (“Favorite gig ever. Extremely professional.”), Motley Crue (“Tough gig. They’re a little bit rougher.”), Creed (“Fuck every minute of that! Those guys thought they were such a big deal.”), and John Legend (“Not a whole lot of interaction. He just likes reading and chilling out and doing his own thing.”). He recently made the unusual transition from driver to rider when he became Aaron Lewis’ full-time pedal steel player. 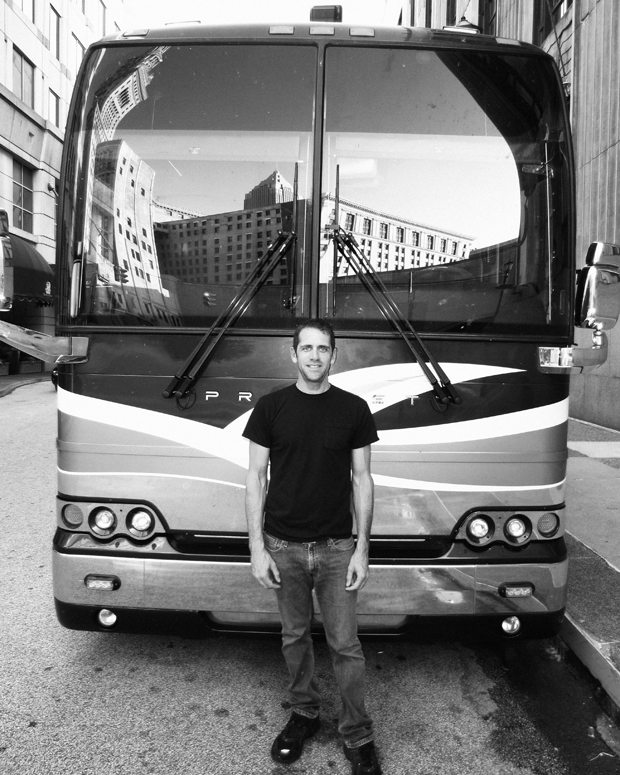 “Driving smoothly is really an art form,” he says. “I’ve ridden with a lot of pretty well-known drivers and was surprised at how shitty the ride was. Once, I was rolled out of my bunk and dislocated two ribs. Going into four shows in a row with dislocated ribs is not a pleasant experience.” Driving, though, is only a small part of a driver’s job. Buses must be cleaned, inside and out, on a regular basis. And as Ron Ward — who’s driven for Sean Combs (“He lets me do whatever I want. If I need Ciroc, I can get bottles from the distributor.”), the Wu-Tang Clan (“I have to get a new damn lung every time I come off the road with them”), and Chris Brown (“He don’t tell me nothing but, ‘You want to go partying? Clubbing? Let’s go!'”) — makes clear, there are certain things he doesn’t abide.

“I’m not going to pick up stupid shit, like after they ransacked the bus,” says Ward. “If there’s weed paraphernalia laying around or weapons, I’m not touching that. Don’t think I’m going to make up your bed when you’ve got a machine gun under it.” Which, Ward claims, actually happened once. “I came across a big-ass machine gun, like, ‘What the hell is this?’ And this was a nice rapper, nobody who had to worry about all this. I mean, who you going to shoot with that anyway?”

To keep their clients content and on schedule, drivers must be adept at maintaining and repairing the bus and every piece of equipment on it. “With a bus, there are so many different parts,” Dotson says. “If you break down, you’re fixing things yourself. It’s not like you can just pull into an entertainer coach repair shop because there’s no such thing. There’s so much more to one of these buses — electrical, generators, batteries, air conditioning systems. It’s all very specialized.”

Federal regulations also have gotten more strict. The Department of Transportation mandates that drivers must have a commercial drivers license (CDL), and they can be behind the wheel for no more than 10 hours a day, traveling no more than 600 miles. “When I started, it still felt like the Wild West,” says Kitterman, who began driving in 2004, but has been aboard tour buses since the early ’90s, when his dad drove for Neil Young. “You could go and drive as much as you wanted, as far as you wanted. I can remember drives we did from Tulsa to San Diego, Seattle to Minneapolis, Indianapolis to Miami — stupid hauls. But it’s getting more difficult to do that.”

The DOT now requires all drives and hours to be recorded in a daily log book, but the rules are frequently flouted. “I’ve heard one driver sum it up best,” says Kitterman. “He referred to his log book as a comic book. Reading through it was funny because none of it was actually true.”

Perhaps the most difficult and unappreciated aspect of the job involves what a driver does when he’s not on the bus. Drivers must constantly adjust their sleep schedules to account for a tour’s itinerary. This can be tough &#8212 some drivers pop Ambien or Adderall to help — but it’s vital for them to be alert enough handle a 45-foot, 48,000-pound rolling hunk of metal into the wee hours of the morning. Most drivers actually prefer driving late at night, when roads are deserted. That means having the discipline to sleep through the parts of the day — the show and the after-party — that everyone else on tour lives for.