Bus drivers hold a unique place in the pantheon of rock’n’roll. Much like baseball umpires, CIA analysts, and food safety inspectors, tour bus drivers are generally only noticed when they do something egregiously wrong like blow a tire and crash into a bridge or dump the contents of their septic tank into the Chicago River. They are an integral part of the touring life and front-row witnesses to its chaos, but rarely participants in it. As more than one driver pointed out, they are the only people on a tour who literally hold the lives of everyone else in their hands on a daily basis. Yet many artists couldn’t tell you their driver’s last name.

“For some people, the driver is just the driver,” says Gillis. “They don’t even see you. That’s unfortunate.”

John Rogan is a veteran driver who has worked for Mariah Carey (“She wants what she wants, but she’s sweet”), Widespread Panic (“I’m part of their family; I go riding motorcycles with [guitarist] Jimmy Herring.”), Korn, and Marilyn Manson. He says he’s experienced his share of rough treatment from artists and tour managers.

“They don’t think we’re humans,” he says. “They treat us like we’re part of the bus, like we’re machines. We’re not. We need sleep, food, to go to the bathroom. I’ve stopped to go to the bathroom and had a tour manager say, ‘Hey, we don’t like to stop once we get rolling.’ I said, ‘Cool, I’ll make a phone call and see if I can get you a driver who has a catheter.'” 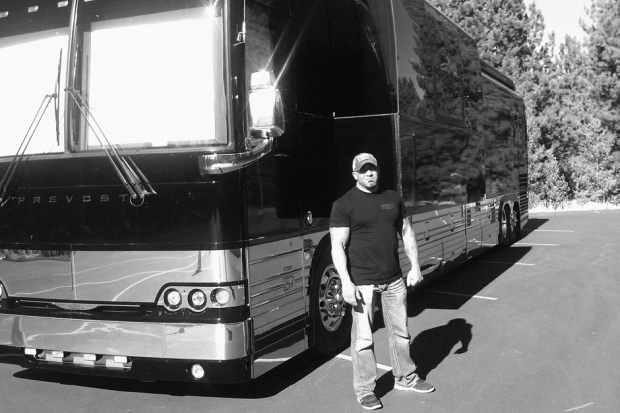 Sales of recorded music have taken a nosedive over the past decade, and as a result, artists have sought refuge on the road. Digital music, file-sharing, and streaming have decimated the market for CDs, the thinking went, but you can’t turn the live experience into a bunch of 1s and 0s. There’s truth to that: Recorded music has largely become a loss leader for concert tickets and merchandise. But the touring industry was always a temporary shelter from the digital fallout. This became readily apparent when the global economy fell off a cliff in 2008. With unemployment rising, consumers’ disposable income dwindling, and gas prices soaring, touring didn’t seem like such a safe bet.

Joe Bamford, who owns Haljoe Coach, a medium-sized outfit, says that it’s the drivers and tour-bus companies who end up getting squeezed. “The music industry is a shell of what it used to be,” says Bamford, who also used to manage bands including Glass Tiger. “There are no music stores, very few record companies, but we’re still driving buses across the country. Nothing has changed, [but] our costs have doubled since 2001 and our revenues have gone down by 30 percent. It used to be if you hauled a band, you felt pretty secure that if you did a good job, you’d be with them for a while. Now, it’s all about getting the nicest-looking bus at the best price. Nobody cares about anybody anymore. It’s so impersonal. It’s like the Wal-Mart-ing of the bus industry.”

With record labels eliminating “tour support” from their vocabularies, while simultaneously dipping into artists’ touring revenue (under the auspices of increasingly commonplace “360” deals), fewer bands can afford tour buses, and most of the ones who can are always looking for deals. The net result is that the bus industry is shrinking, and opportunities and income for most drivers are either stagnant or in decline.

“The tour managers are under pressure because they’re not getting paid enough to do this,” says Bamford. “The bands aren’t making any money. Gregg Allman said one time, ‘I never thought I’d be on the road to sell t-shirts.’ But that’s what’s happening. And the bus drivers are in the middle of all this. Everybody is asking them to cut back.”

Several drivers echoed Bamford’s concerns. Generally, drivers work as independent contractors, which means no health benefits, no pension, and no job security. Any effort to unionize or even lobby for pay increases has been thwarted by an overabundance of drivers and an under-abundance of jobs. Pay is typically about $200 a day, but sometimes tour managers insist on hanging around a venue until after midnight so they can trim the number of days the driver’s on the clock. Many tours now refuse to pay drivers a per diem for their expenses, which as Gillis points out, can be a big deal if the band is staying at the Ritz-Carlton and a burger at lunch costs $17. Rogan says he is sometimes asked to work overtime for free.

“We’re the bottom of the barrel, so whenever they’re trying to cut costs, they’re always trying to screw the driver out of money,” says Rogan. “It used to be a little easier. You’d start a tour and they’d give you t-shirts, swag, free tickets. These days, if you ask for tickets, they look at you like, ‘How dare you?’ It’s gotten a lot tighter.”