Watch the dark meditation on the evils of war 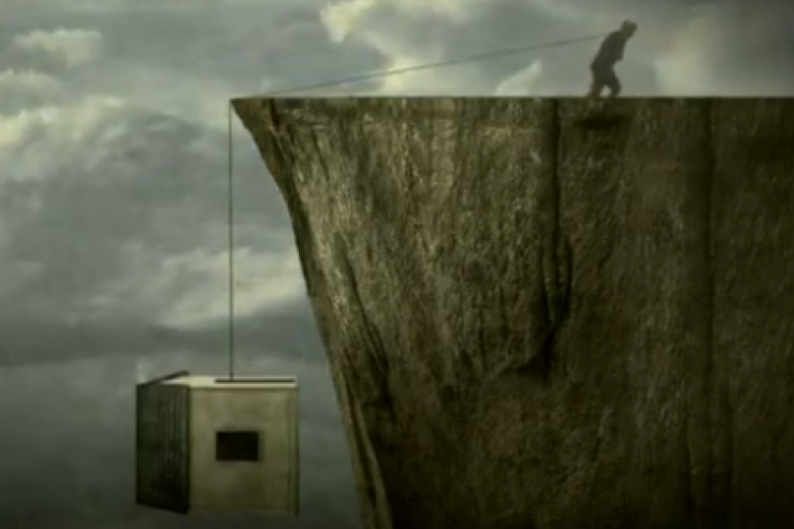 Over the past few weeks, gravel-throated underground rock icon Tom Waits has been releasing teaser images to something, including one where he is wearing an eye patch like a pirate. Today, he finally revealed just what he’s been up to, a video for “Hell Broke Luce,” a particularly gruff track off last year’s Bad as Me (which, we should add, features Keith Richards and Marc Ribot on guitar, Flea on bass and Tom’s son Casey Waits on drums.)

The expressionistic clip was directed by Matt Mahurin, who has also made videos for U2 and Metallica, and it depicts Waits pulling a house as he growls, “I had a good home but I left.” Images of fire, gas masks and vultures ensue, followed by visages of shark-like warships, body bags and marching skeletons. The depictions of the fallout of war get bloodier and heavier as the video goes on, until Waits sings, “Now I’m home, and I’m blind and I’m broke / What is next?” For a man who has always sounded like he’s carrying the weight of the world on his shoulders, this is the evidence.

“Matt Mahurin has created an apocalyptic war dream to accompany the song ‘Hell Broke Luce.’ Kathleen [Brennan, producer] and I envisioned it as an enlightened drill sergeant yelling the hard truths of war to a brand new batch of recruits,” Waits said in a statement. “The video grew from the gnawing image of a soldier pulling his home, through a battlefield, at the end of a rope.” Then, in typical Waitsian fashion, he added, “I think you will agree, it’s uplifting and fun.”