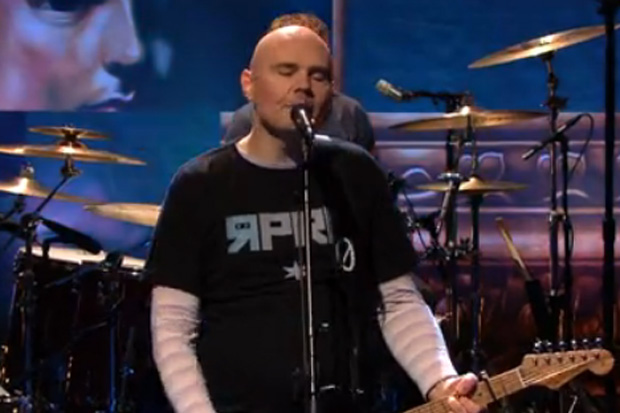 This wasn’t Smashing Pumpkins’ first rodeo, or whichever phrase you might find more accurate. The Billy Corgan-led band’s performance on The Tonight Show With Jay Leno yesterday followed gigs in 2010 and 2000, although during the alternative-rock survivors’ ’90s heyday their NBC appearances came on Saturday Night Live instead (maybe Leno was on Team Pavement?). Meanwhile, the current Pumpkins are also launching a North American arena tour, with specific U.S. dates still to be announced, though they’ve said they’ll kick off October 10 in Seattle.

Watch Corgan and Co.’s performance of new album Oceania’s “The Celestials,” a baroque-rock 101-percent-love declaration with mournful chords that vaguely suggest Nirvana’s “Polly,” below, and check out their full schedule so far, including cities without official announcements and venues yet. Also, while it lasts, you can check out the 2000 Pumpkins lineup’s rendition of Machina II piledriver “Cash Car Star,” which a slightly less gray Leno amusingly introduces as “their last performance on TV” before quipping about the LP in his hands, “This is the biggest CD I’ve ever seen.”