Skrillex Will Party ‘With Your Friends’ at New Fest 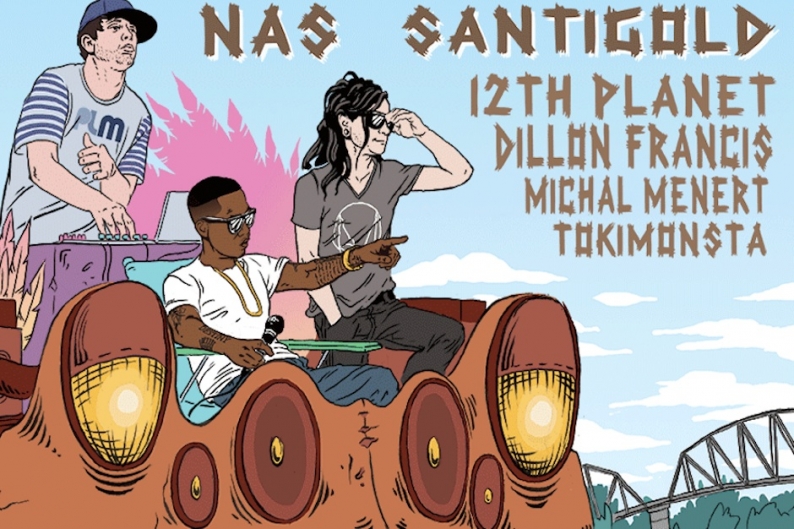 Taking a long train ride is a great way for musicians to bond. We saw it in the doc about Mumford & Sons, Edward Sharpe, and Co., and now a fest has seemingly stemmed from Skrillex and Pretty Lights’ time riding the rails across Canada. Today, those two EDM artists have jointly announced their With Your Friends festival, set to take place in Nashville on October 26 and 27.

In addition to sets by Pretty Lights and Skrillex (who is also playing Jay-Z’s Made in America fest, New York’s Electric Zoo, and the Virgin Mobile FreeFest prior to the event), the fest will feature Nas (with a nine-piece band), Santigold, 12th Planet, Dillon Francis, Michel Menert and TOKiMONSTA. As the illustration on the announcement’s poster suggests, the fest is set to take place on the Music City’s waterfront with the Nashville skyline sparkling behind it. The fest’s promoters are also promising a post-show private event that will occur at some “undisclosed terrestrial location” (so leave your spaceship at home, if you can afford one).

Tickets go on sale Wednesday (more info at the official fest site). The promoters are also offering VIP packages, but the perks haven’t yet been announced, so let’s take some time to speculate on what they could offer: guitar lessons with the No. 100 artist on SPIN’s 100 Greatest Guitarists of All Time, a chance to weigh in on Kanye West and Skrillex’s new track, internet stations where you can wub the web (and listen to SPIN’s 30 Greatest Dubstep Songs list), work on some verses with Nas, listen to him talk Winehouse or maybe register to vote Democrat or Rebublican. The possibilities are endless.