Sigur Ros Team Up With Ryan McGinley for ‘Varuo’ Video 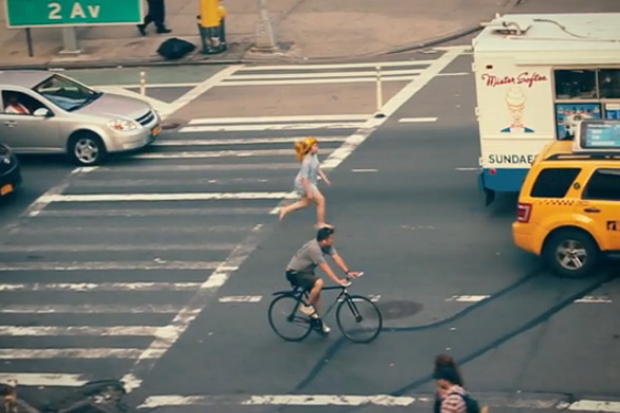 Since May, cinematic post-rockers Sigur Rós have been challenging filmmakers with their Mystery Film Experiment, giving them a small budget and carte blanche to make arty videos with the music on their latest album, Valtari. The latest, for the song “Varúð,” is by New York City-based photographer Ryan McGinley, who was one of the youngest artists to have a solo show at the Whitney Museum of American Art and who has won awards from American Photo magazine and the International Center of Photography.

The visuals are largely washed-out aerial cityscapes, which focus on the photographer’s friend, Jessica Tang, as she skips through surprisingly empty Manhattan streets and lets her literally golden, pompom-like locks flap in the wind. As the music builds — and with Sigur Rós it always seems to — the shots are busier and tighter, until the music subsides again to show a golden city street. As the credits kick in, the background focuses on Tang’s tinselly hair.

It all adds up to a fittingly impressionistic look for an impressionistic song, and it provides a nice visual foil to director Inga Birgisdóttir’s people-on-mountains interpretation of the same song. With such long, broad shots and unusually sparse surroundings, it’s the sort of video that sounds pretty boring in words; but there’s something about the action around Tang, such as a man kneeling to pray on a slice of cardboard and even the apathy of the passersby at the crosswalk as the model jettisons through, that makes it compelling.

In his comment on Sigur Rós’ website, McGinley stated, “This piece is my poem to New York City. I wanted to bring a childhood innocence to the streets, through a character whose own light and wonder effects the world around her. I’m always interested in an atmosphere where dreams and reality mingle on equal terms.” That last sentence perfectly captures what’s so appealing about Sigur Rós, too.