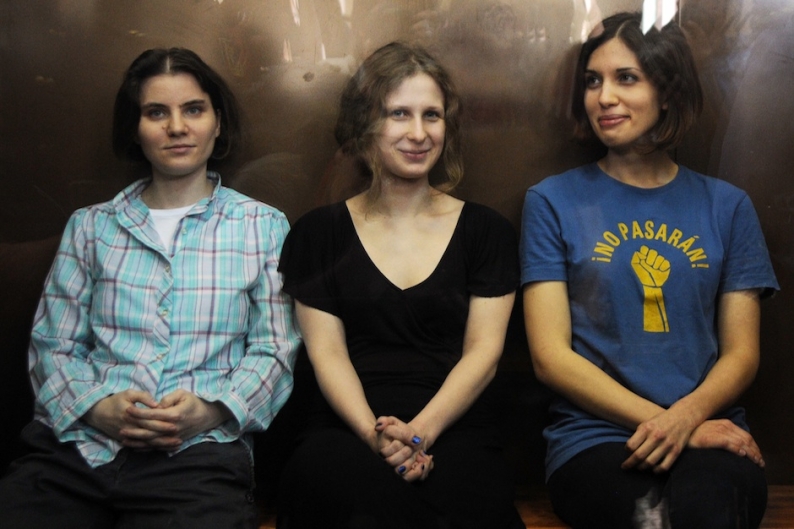 Three members of Russian band Pussy Riot are guilty and must serve two years in prison, including time served, a Moscow judge has ruled, according to the Guardian. Judge Marina Syrova found the riot grrl-influenced group guilty of “hooliganism motivated by religious hatred” over an impromptu concert in a cathedral, which led to their arrest more than five months ago. Though Pussy Riot’s Maria Alyokhina, Nadezhda Tolokonnikova, and Ekaterina Samucevich faced up to seven years of prison time for this medieval idea of a crime, the judge sentenced them to two years apiece beginning from the date of the arrest.

As the Guardian reports, the three women laughed after the judge announced their sentence, and a cry of “shame” ran through the courtroom. The judge cited the women’s lack of previous crimes, the fact that two of them have children, and their other positive characteristics as extenuating factors, but found that “there are no exclusive circumstances” to reduce the charges against the band. “The defendants violated the common rules of behavior in the cathedral,” the judge is quoted as saying.

Pussy Riot’s crime — essentially, protesting Russian leader Vladimir Putin the day before his election — has drawn increasing support from Western musicians. Beastie Boys’ Ad-Rock recently DJed a Pussy Riot benefit, and artists from Bikini Kill’s Kathleen Hanna to Billy Bragg and even Paul McCartney have spoken out on the women’s behalf. By putting Pussy Riot in prison, even for less than the maximum sentence, Putin’s government may have only made them an international cause celebre.