The slept-on Houston noise-rapper goes acoustic, makes one of the most stunning albums of 2012 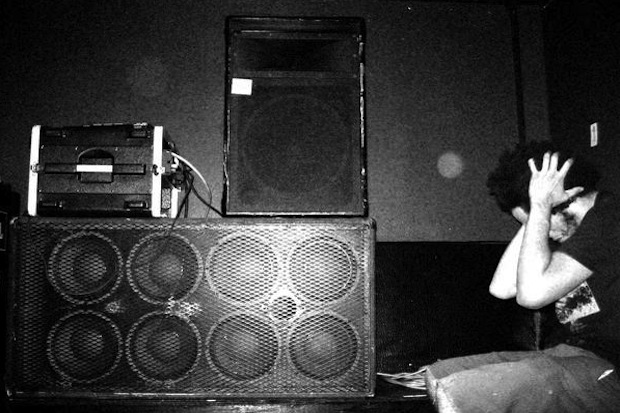 One of the biggest hip-hop hooks of last year came from a song far away from any “blazing” hits station. It’s was Houston noise-rapper B L A C K I E All Caps, With Spaces on “Warchild,” off his EP True Spirit and Not Giving a Fuck, when he declared, as the feedback-filled beat temporarily simmered down, “I don’t give a fuck about America, nigga, it kills its youth!” That memorably poignant slogan got stuck in your head because B L A C K I E delivered it with all the conviction in the world, and it even had some of ’90s hip-hop’s ability to just cram a phrase, any phrase, into your brain by sheer force of will. It’s M.O.P. meets Minor Threat on top of an instrumental that Death Grips wish they were gnarly enough to conjure up.

But the sound of B L A C K I E’s new album, GEN, departs from the Kevin Drumm-esque racket that usually backs him up. Save for a few hissing, screeching interludes, GEN is mostly acoustic, consisting of throaty, youthful, sometimes-rhyming shouts, sparsely backed by guitar, bass, piano, horns, and at one point, a whistle. “Radiowaves” begins with pleasant piano, while B L A C K I E screams, backed up by even more screams — like punk-rock crew vocals by way of hip-hop ad-libs; Then a wave of proggy horns swings through, and B L A C K I E responds, growing more fervid in his delivery. It’s an arm hair-raising moment on an album full of them.

GEN comes off like a closed-circuit genius trying to start music all over again. B L A C K I E’s voice is the strongest instrument here, and he stretches it to its limits, shifting from rapping to singing to chanting to spoken word. The music is audaciously simple, like early hip-hop loops, but informed by outside sources as disparate as folk-punk and free jazz. The closest comparison would probably be those dubby interludes from Fugazi’s Red Medicine and the trippy scraps that found their way onto the soundtrack to Instrument. But, really, you won’t hear another album like it.

The shout-rap storytelling of “Home Town Blues” empathetically details the life of a runaway kicked out of suburbia. Maudlin piano makes the sadness loud and clear, while B L A C K I E howls fragments of memories, conveying an inspiring sense of perseverance. “Everybody Knows (When We Get Together),” a song about B L A C K I E’s son, finds him prematurely empathizing with the imminently rebellious teen by hypnotically spitting, “We’re gonna scream, gonna shout, gonna fuck shit up,” and later announcing, “This is for my son, this is for my son,” and finally, cued by a dramatic stab of piano, confessing: “‘Time has passed me by,’ I’ll never say to you / Always with me now, I’ll never be alone again.”

He also reminds his son that it’s a “fake-ass world out there,” but immediately turns that into a liberating thought: “Anything you want, can be done.” It’s in sharp contrast to GEN’s unforgiving, deadbeat dad missives “False Marriages” (“You got what you want, you will never be home”) and the self-explanatory “The Selfishness Of Evil Men.” Despite B L A C K I E’s passionate commitment to venting his spleen, cynicism never remains victorious, not here.

To pick up a copy of GEN, go here. B L A C K I E All Caps, With Spaces is also one of our 5 best new artists of the month.