So, just like that, music writers have gone back to ignoring the Insane Clown Posse?

There was window of time there — which seemed to hit its peak with “Miracles” — where it was cool to condescend to the duo, play armchair Jim Goad, and project some thoughts about the white underclass onto their music. But, no more. And that’s too bad because along with last week’s pretty good album The Mighty Death Pop!, ICP also released the bonus album Freaky Tales (one of three bonus albums, actually), which stretches Too $hort’s 1987 rhyming laundry list of sex encounters set to gulping synthetic bass, from eight minutes to a full hour of endless dick jokes and dirty-minded raps.

Suggesting Freaky Tales is tasteful is a bit ridiculous, but producer Mike E. Clark’s recreation of the original beat is mindful, and Violent Jay and Shaggy 2 Dope have certainly captured the spirit of the original. In their grubby paws, the song remains a raw, uncooked lope of bass bubbling on and on and on. And released in the midst of this “ratchet music” phenomenon that’s slowly engulfing the radio thanks to “Rack City” producer DJ Mustard, Freaky Tales even works as a little bit of a history lesson to all the young Juggalos imbibing rap minimalism by way of the radio, whether they know it or not. Here’s where the transcendent inanity that now manifests itself as Tyga, YG, and Joe Moses got its start. 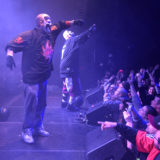 Violent Jay and Shaggy 2 Dope are also doing a Quantum Leap-like adjustment to hip-hop history, fulfilling Too $hort’s original plan for “Freaky Tales,” and then some. See, $hort Dog’s concept was to detail his escapades with 75 girls (75 Girls Records and Tapes was the name of the label he was on when he conceived of the idea). And though Too $hort accomplished that goal if you compile many variations on the song released between 1987 and 1999 (check out “The Complete Freaky Tales” by Noz), ICP’s Freaky Tales does it on one endless, uncompromising track.

Chained to the “I met a girl, her name was…” format established by Too $hort, ICP push the idea as far as they can, threading their obsessions and classic comedian callbacks through the full hour. “Mickey Mouse chick, Brenda Song / I see her on TV, my dick grows long / I don’t want to diss her or say nothing wrong / Because maybe one day I can peel her thong,” Violent explains, no doubt the weirdo thoughts rushing through his head while he watches The Suite Life of Zack & Cody or Disney Channel made-for-TV movie Wendy Wu: Homecoming Warrior with his kids. And then a few bars later: “I’m an asshole, ask Francine / I took her out to dinner and then dancing / Later on we was fuckin’ / It all went wrong / I hit it from the behind and called her Brenda Song.” Zinger!

My favorite freaky tale comes from Shaggy because it totally bypasses blush-worthy fuck boasts and enters the world of body horror comic strip comedy only comparable to something like Johnny Ryan’s Prison Pit: “There was one time I undressed Vanessa / Her booty fell out bigger than the dresser / Between her asscheeks was her homegirl Tessa / She must’ve sat on her and forgot nonethelesser / Tessa was a twig, Vanessa was big, you wouldn’t believe the stupid shit we did / Once we was done, two became one, as Tessa slid back from where she came from.”

Yes, the whole thing is beyond juvenile, but the vast array of women — strippers, cops, Juggalo fans, suicidal women, meth-heads — provides a multitude-filled collection of female types, and keeps up ICP’s inclusive sense of taking in all kinds. Lynn who farted at the water park; Lulu who made a voodoo doll of Violent J (and whose pussy tastes better than granny’s stew). You get the point. What’s even comparable to Freaky Tales? Imagine Berlin Alexanderplatz as directed by Robert Downey Sr.; Infinite Jest written by Redd Foxx; It’s a party record and boundaries-busting endurance test, all at once.