Plus: an update on Pearl Jam's next record, and Lillard auditions for McCready's side project 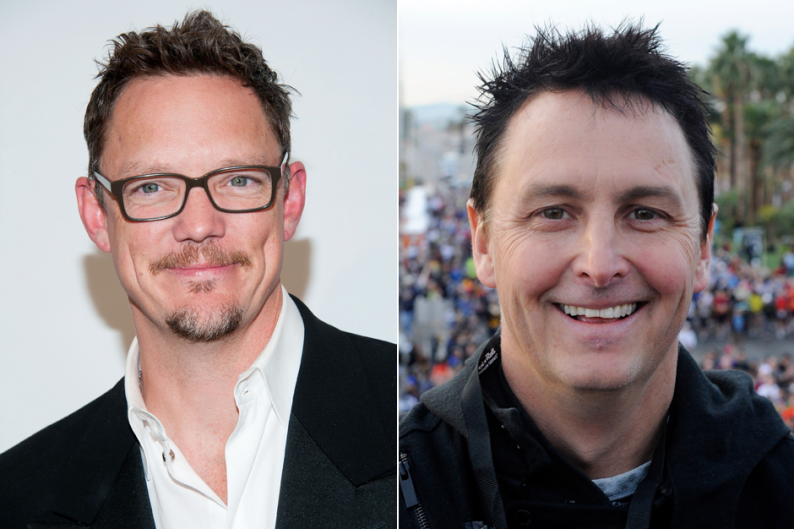 Last summer, actor Matthew Lillard, known for his work in ’90s cinestaples like Scream and SLC Punk, tweeted the following: “Mike McCready of Pearl Jam is into scoring FAT KID RULES THE WORLD! I’m trippin out that a guitar legend is down with the FATNESS.” At the time of the announcement, Lillard was in Seattle to scout locations for what was to become his directorial debut, the finish line in a decade-long mission to bring KL Going’s best-selling young adult novel of the same name to the screen. At the suggestion of his agent, the two had lunch.

“There are a few times in your life when you’re in a meeting and you know, if all goes well, it’s going to impact your life in an incredible way,” Lillard said of his first encounter with the Pearl Jam lead guitarist, during a recent call. “You go into an audition and you’re like ‘Yeah, it could happen but it’s a million miles away.’ But this was one of those meetings.” McCready says he was immediately moved by the script. “It really resonated with me, feeling uncomfortable and remembering what that was like in high school and all the weird pressures that you have. And then upon meeting Matthew and seeing his enthusiasm, I was happy I was asked.”

The film follows the everyday travails of Troy, an obese Seattle high school student, who, with an assist from a guitar-wielding, X-obsessed friend named Marcus, finds himself in punk. Though McCready has scored episodes of Fringe and Hawaii Five-O, as well as 2010 surf documentary The Westsiders, Fat Kid marked his first time composing for a feature-length drama. “It’s a different muscle,” McCready says of scoring to film. “What’s most important is what’s on the screen, what [Matthew] wants, what the actors are saying. The music is secondary, which is kind of interesting because that’s been first in my life forever.”

For those familiar with McCready’s guitar work, though, the Seattle native’s contributions are unmistakable. And according to Lillard, the fit was natural from the start, when the two met in L.A. to trade notes after McCready and Pearl Jam returned from a post-PJ 20 trek through South and Central America: “[Mike] grabs a guitar and as he’s watching the movie he’s playing music. We showed him six scenes and I just walked out blown away. His ability to translate the emotion of what he was seeing, through the guitar, back out on to the movie, without sitting down and thinking — there was nothing cerebral about that moment.”

Adds McCready, “That’s how I write music for Pearl Jam, basically: it just sort of comes out of the air.” It’s a collaboration that combines artists whose individual ascents dovetailed in the ’90s, an era for which nostalgia continues to intensify. “I distinctly remember when ‘Jeremy’ came out,” says Lillard of his first memories of Pearl Jam. “And when the ‘Even Flow’ video came out: Eddie [Vedder] was in some theater in Seattle climbing all over shit and I remember thinking, ‘Dude. This band is ridiculous.’ ” Lillard also recently guested as DJ on Pearl Jam’s Sirius Satellite Radio station. “This is probably the most lame thing I’m ever going to say out loud,” he says, “but I think I sound like Eddie Vedder. I can sing on key to Eddie Vedder.”

Twenty years later, McCready says the Singles soundtrack is the one record he has up on his wall at home in Seattle. “I remember writing ‘State of Love and Trust’ with [Pearl Jam bassist] Jeff Ament,” he laughs. “I remember stealing the riff from some guy at a party somewhere here in Seattle. Well, just that one chord. The riff I came up with, but the one chord — it’s like a C chord where the A is — I had never seen that before. I didn’t steal it, I appropriated it.”

Read Screaming Trees on their own Singles track, “Nearly Lost You.”

And although reports surfaced earlier this year that Pearl Jam were spending time together in the studio to work on a follow-up to 2010’s Backspacer, McCready says the fivesome are currently in a “holding pattern,” as Vedder prepares for a solo tour later this year and drummer Matt Cameron returns to work with Soundgarden. “We’re just kind of sitting around, writing songs,” he says. “We have about seven ideas so far that we did last year and we’re just kind of sitting on those right now.”

In the meantime, McCready has recently begun collaborating on “dark,” new material with Guns N’ Roses bassist Duff McKagan (a high school classmate) and Screaming Trees drummer Barrett Martin that he likens to Led Zeppelin, with nine songs already written. “It’s all in its infantile stages right now,” he says of the unnamed trio, “but we hope to have somebody sing over it some day.”

At which point, Lillard interrupts to bellow the chorus of “Even Flow.”

“We just found a guy,” McCready says, laughing. “You passed the audition. Will l be able to do another movie now?”

Fat Kid Rules The World was recently featured on the Vans Warped Tour and is currently being screened by online request. Check out a list of this month’s showings below and to make a request of your own, (as well as find a growing list of dates) head to the Fat Kid site.