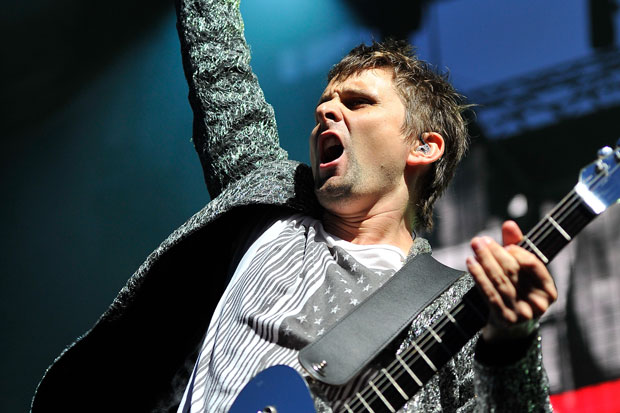 When Muse said there would be a dubstep influence on upcoming sixth album The 2nd Law, the joke was on anyone who disbelieved them. Not, mind you, that the epically inclined arena rockers have changed their grandiose ways an iota.

It takes a full minute and a half before the bass drops on “The 2nd Law – Unsustainable,” which, as Seattle’s 107.7 The End reports, has surfaced as part of a special for fans who pre-ordered the album. As the Skrillex-loving Brits previously confirmed, they replicate the wub Rage Against the Machine-style, with analogue equipment. The dubstep nods are surrounded by vaguely John Williams-ish orchestration (think Star Wars: Episode 1’s “Duel of the Fates”) and a newscaster’s chopped-up narration about “entropy” and, yup, the unsustainability of current global energy and economic policies.

Where frontman Matthew Bellamy was last heard predicting victory on Muse’s Olympic song, “Survival,” this time he croons wordlessly. A scary robot does most of the talking, repeating the word “unsustainable,” which, while probably true, is a bit less fun than, say, “Intergalactic.” That said, these guys know what they’re doing, the CNBC-on-vodka-Red-Bull-and-dystopia video is dramatic, and when the drop arrives, you just might find your asymmetrical haircut banging, your wub handles lost in the mosh. What would Elton think?