The pop songstress (and Mark Ronson collaborator) remembers the making of her debut full-length, due August 14 via Ultra 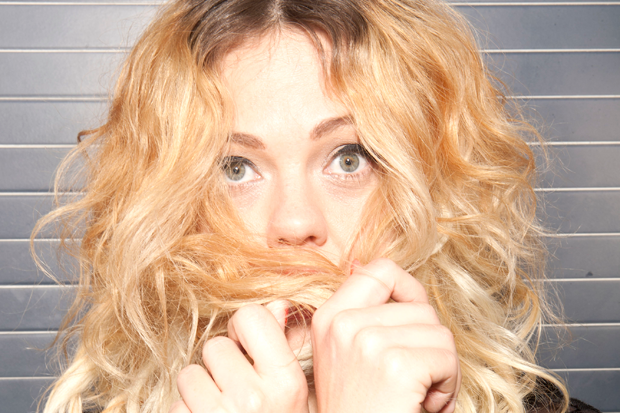 Brainy Brooklyn pop songwriter, MTV-approved innovative performer, and admitted gearhead Amanda Warner calls her forthcoming full-length debut as MNDR Feed Me Diamonds one of the “most difficult” experiences of her life. “I was tested, on all levels at all times,” she says of the album she and producer Peter Wade wrote in the wake of her star-making guest appearance on “Bang Bang Bang,” the first single off Mark Ronson & the Business Intl’s 2010 LP, Record Collection. “I know who I am. I’ve been making music my entire life. I wasn’t willing to bend and do what the industry wants you to do. I really had time to fight.” Below, read the story of every track on Feed Me Diamonds as Warner remembers it, and hear the album (due August 14 via Ultra) in its entirety.

“#1 In Heaven”
This was the first song we started together in the studio. I had been up at 6 in the morning for some weird reason. I was really poor, really broke, and I was hungry and didn’t have any money to eat, and, I just went Patty Hearst. I was really obsessed with her at the time, I had been reading a lot about her. “#1 in Heaven” is about her and the moment she really lost it. But actually, I don’t think she lost it. I think that, in her mind, she had a moment of altruistic clarity, when she saw the difference between absolutist right and absolutist wrong. I pulled a quote of hers for the chorus: “Tell them I’m smiling and send my greetings.” That’s what she said after she was arrested by the FBI after the bank shooting, in the Sunset district of San Francisco. She came from one of the wealthiest families in America and she threw that away for what she believed in. I don’t think you’d see Paris Hilton do that. It was a passionate time and she was a passionate, iconic figure.

“Stay”
This song was written really late. It’s about moments in your life when you’re doing something and you’re involved with something and you know you need to see it through. You want to stay in the moment when you’re most happy or most in love, but you’re moving on. You want to be frozen and you can’t be. Whether that’s a relationship or just a time in your life, it’s about life’s ups and downs, about wanting to be frozen in the good moments.

“Faster Horses”
This came to me at a time when I was feeling pressure. I felt like I had the industry side of things telling me, “You need that stereotypical, radio-friendly song.” I was fed up with that process for years, fighting to keep this project’s integrity whole. I was talking to Peter and I was frustrated. It gets to be sort of tiring. Someone had sent him a Henry Ford quote, and, by no means am I a Henry Ford fan, but he did say, “If the public asked me what to make, they’d ask me to make faster horses.” Steve Jobs said, “You don’t ask the public what they want, you tell them what they need.” That kept me going at time when I was hearing, “Can you be a little bit more red, because you’re a little too purple right now.”

“Blue Jean Youth”
It was originally written for the one of the tracks Mark Ronson sent me. I really liked it and it didn’t fit the aesthetic he was going for, but the lyrics were really special to me. It’s about when you’re a teenager and you’re just so obsessed with what you’re into, when you believe in it so much, you can never be rattled. You lose that as you get older. Remember your blue jeans, remember when you were so obsessed with garage music? I remember specifically going through a garage music phase. If it wasn’t garage music, I wouldn’t listen to it. Like, fuck it: garage music or die. I was watching an interview with Vivian Girls and they were making fun of disco beats and techno beats and I thought it was so funny and awesome. I remember being that way!

“Fall In Love With the Enemy”
The verses and pre-choruses were written but we couldn’t write the chorus. It had been written for a year and the chorus just never came. We tried four times, four different choruses. We played it for a producer and writer I like a lot, Patrick Berger, and he heard a chorus and we were able to finish it. It’s a weird, quilt-like, patchwork song, but it’s about sexuality and passion. Simple and dry. It’s about be taken advantage of and liking that.

“U.B.C.L.”
It was the first pop song I had written in maybe eight years. I had just been making experimental music before then. It’s about my time in San Francisco and the absolute mayhem that was ensuing at all times amongst my friends. We didn’t go out to clubs per se, but we were certainly out of our minds. When I started to write it, I was sitting in my room, working on the beat and I was thinking about how pop songs are really simple if you just spell the word club. So I started spelling it on a piece of paper and I thought, well, what if I you just played off the U and B: “U B Clubbin’.” It’s thumbing your nose at that concept, pop songs in the club. The club. You have to be up in the club. The club. What about the club? What if you just spelled the word club? That was the brain surgery behind it. I wanted to make it really simple. What blows my mind is that no one seems to get that. I hope that changes.

“Feed Me Diamonds”
It’s an homage to Marina Abramovíc. It’s weird to use the word inspire. I wish I could another one. But she’s really important to me, and a really important artist. I was going through a really tough time, a really dark time personally. I was really broke and hungry, and I had dysentery. Everything was the worst I could expect or experience. She claimed that her father, who was an important political figure in Yugoslavia, was assassinated by being fed diamonds. I read about it more and that was a way to overthrow tyrannical kings, to make it look like natural causes, because when you eat diamonds, your digestive system will shred and you bleed out. This album isn’t a happy go lucky pop record and it captures a lot of emotional moments in my life. Politically and emotionally, this one really brought it all together.

“Burning Hearts”
This came from a point where I felt really defeated. I was looking for a label partner who really believed in me. I was thinking I don’t really need a label or a manager, really struggling. You make some decisions and you think they’re the right ones and maybe they’re not the right ones. It left me kind of heartbroken. I was also listening to a lot of the Buzzcocks at the time and I made that beat and then wrote a really simple chord progression and brought it into Peter. He added this amazing synth design to it and I thought it was the coolest thing I’d ever heard. It literally took a year and a half to write. I was frightened of it. It was that good.

“Sooner or Later “
Sooner or later we’re all dead but I’m going to do everything I can to stay loyal to myself and to others. I promise. But sooner or alter, we all drink the poison, but I’m going to try to not let you do that. That can mean a variety of things. It was political for me. I was frustrated with America, with music. Wow, this whole record is so dramatic. “Waiting”
This was the last song written for this album. Sonically and lyrically speaking it represents an awakening from situations we would all like to change in our lives.

“Sparrow Voices”
This a political song. It’s about China and their economy. They’re growing at such a rapid rate and their infrastructure isn’t built up and there really isn’t anyone monitoring how it’s affecting the environment. I have a lot of friends who’ve gone to China. They talk a lot about how people go to work, how the class system is very strong there. It’s a love story about a solider and a working woman. They fall in love but they can never be in love.

“I Go Away”
I wanted to write a song on the record where the lyrics had no metaphor in them. It was a moment in my life when that was really difficult. I just wanted to go away. Have you ever had that feeling? I feel like everyone’s had that feeling in their life: I wish I could just go away. I wanted to write it the way Stevie Nicks would write it. She wouldn’t get too into metaphors. I’d never done that before.

MNDR Give Living Days’ ‘Thrill Anybody?’ a Crisp Facelift