This morning the Internet was convinced Ke$ha had written a fierce letter to Lady Gaga about wearing fur. “I know that animal rights are most likely not at the top of your list of ‘Things to Work On,'” the note reads, “especially with your ‘Born This Way Foundation’ taking off (which I congratulate you on), but I would expect you to be a bit more sympathetic, especially since you are a huge force in the fashion world.” Despite the fact that the letter features Ke$ha’s name in sparkly gold on the letterhead, and that she’s a firm defender of animal rights, the “Tik Tok” singer’s reps confirm to SPIN that it is a fake.

The concern over Gaga’s relationship to fur coats however, is very real, and dates back to 2009, when she told Ellen DeGeneres on her show, “I hate fur and I don’t wear fur.” Nevertheless recently, she’s been wearing fur coats — while carrying a puppy, no less (as the Hollywood Reporter points out) — on a recent stay in Europe. This prompted PETA Vice President Dan Matthews on Monday to write: “What happened? Are your stylists telling you that it’s fake, or are you a turncoat?” Later, after comparing the pop star, who’s known for her meat dresses (even on The Simpsons), to the “mindless Kim Kardashian,” he says, “As we plan our fall campaigns, please tell us whether what you gracefully told Ellen was heartfelt or just a pose.” Seeing the note, actor Alan Cumming tweeted, “Guess she doesn’t love all little monsters.”

After a chintzy tweet asking her critics to credit clothing designer Hermès, Gaga responded via her own social network yesterday: “To the fans. i want you to know that I care deeply about your feelings and views, and I will always support your philosophies about life…I do not however support violent, abusive, and childish campaigns for ANY CAUSE. Particularly one that I respect. ‘Animal Rights.’ I am choosing not to comment on whether or not the furs I purchase are faux fur-pile or real because I would think it hypercritical not to acknowledge the python, ostrich, cow hide, leather, lamb, alligator, ‘kermit’ and not to mention meat, that I have already worn.” She went on to say, “I won’t bend at the sight of an absolute art piece of a coat. I have no chains about this. You see a carcass, I see a museum pièce de résistance.” She later closed the letter by saying, “And to campaigners, Save your flour to make bread for the children who are hungry,” in reference to the March flour-bombing of one Kim Kardashian, to which she added, “Kim Kardashian is fabulous.”

Gaga, who has a costarring role in Robert Rodriguez’s upcoming movie Machete Kills, recently announced her new album, ARTPOP, via tattoo. Its first single is due out September 6 and is nauseatingly titled “Partynauseous,” and features a guest appearance by rapper Kendrick Lamar. 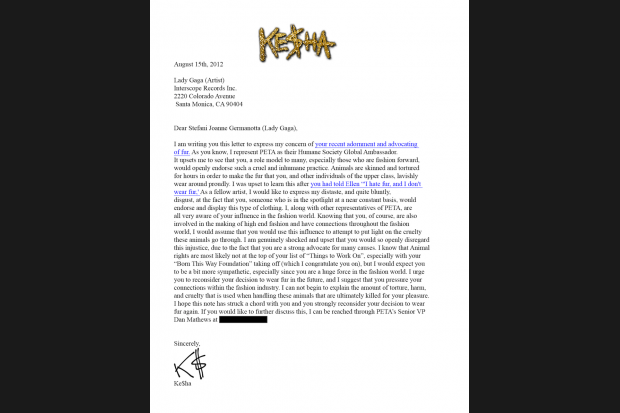