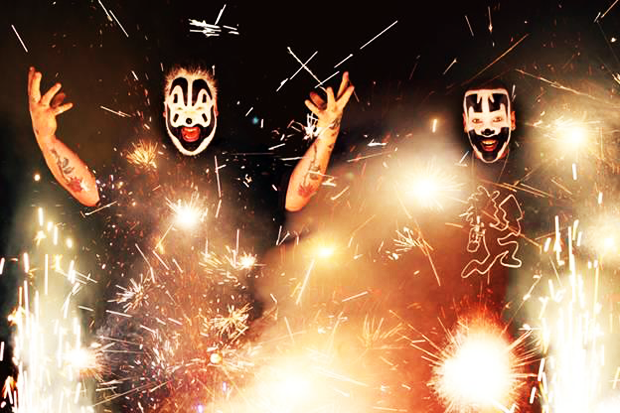 This afternoon, at the 13th annual Gathering of the Juggalos, horrorcore mainstays Insane Clown Posse announced that they are looking into suing the Federal Bureau of Investigation for classifying their fans as a “loosely organized hybrid gang” in its National Gang Threat Assessment — a demarcation that put Juggalos up there with Bloods, Crips, and the Aryan Brotherhood. ICP made the announcement Thursday afternoon in the Seminar Tent, one of the largest sit-down mini-venues on site. It was overflowing with an estimated 1,500 fans waiting for what the group had tweeted earlier would be “the biggest announcement of our career.”

During the seminar, ICP’s Violent J discussed how, at first, he didn’t know how to respond to the FBI’s accusations. But now, they’ve decided to pursue suing the FBI, “no matter what it costs or what it takes… The main fact is, we’re not just layin’ down and taking it up the ass.” The tent erupted in cheers and chants of “Family,” and many Juggalos started crying. As ICP’s lawyer, friend, and longtime Juggalo, Ryan Farris said, “This is a family of love, this ain’t no organized crime family.”

Their impending case comes after the group got wind that one Juggalo, who was on probation for two armed robbery cases, wound up on New Mexico’s Most Wanted list. On his wanted poster (viewable here), it lists “gang affiliation” as “Insane Clown Posse ‘Juggalo.'”

Today, the group and its label, Psychopathic Records, launched juggalosfightback.com. On the site, Juggalos are encouraged share their stories of how their rights were impacted for being fans of ICP. “We want to show our appreciation and support for our fans and we are prepared to assist you in learning about your legal rights and to fight for you in Court, if possible,” reads the statement on the website, which promises to “assist you in getting the legal help that you deserve as a Juggalo.” Moreover, fans who are actually at the Gathering have a chance to meet with a lawyer who is building what sounds like a class-action case. “The only reason this is not all over the world news is cause it happened to us, and ICP is a joke to the mainstream world,” said Shaggy 2 Dope.

Insane Clown Posse’s legal counsel, Howard Hertz of Hertz Schram PC, has released the following statement: “We are seeking individual Juggalos whose rights have been violated as a result of the mistaken belief that they are a ‘gang member.’ If you or someone you know has suffered any negative consequence with an employer, governmental representative, including law enforcement, border patrol, airline security, or other local, state or federal governmental agency or employee as a result of your status as a Juggalo, we want to know about it.”

One Juggalo, Shawn Wolf of Cottonwood, Arizona, burst into tears when ICP announced that they’d be helping out fans who have been profiled by police for their taste in music. Hugging a friend and saying, “You don’t know how much this means to me.” He explained that he’d lost custody of his young son solely because of his ICP fandom. “I’ve been a Juggalo since I was 16. The state of California flew to my house [to see if I was fit], and it’s all ICP-decked out,” he said. “Just because of that, I was kinda screwed.” Wolf doesn’t have the money for a lawyer to try to fight for his child, and intends to use the support ICP is promising. “Violent J and Shaggy have the kind of dedication that they just can’t let something like this go,” said Wolf.