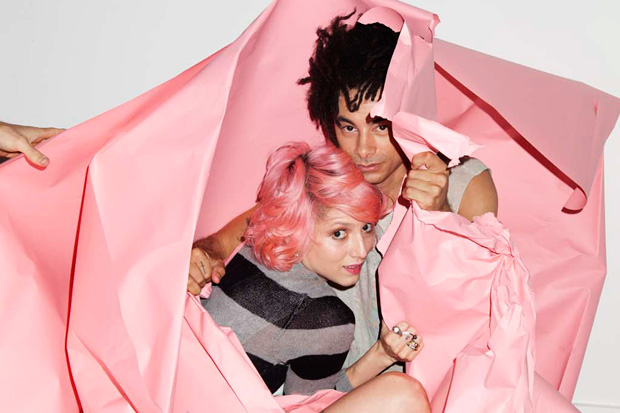 Who: Hailing from Brooklyn — via Brazil (Isabel Almeida, 27) and a woodsy suburb of Philadelphia (Derek Watson, 29) — Hunters met in late 2009 while working at an arcade in New York’s Chinatown. “There was a rumor they had a live chicken inside the claw-drop game at one point,” Watson says, “but I never saw that.” The duo bonded during downtime over a mutual appreciation for doom-metal pioneers Pentagram and plotted infectious noise-punk domination over dim sum at the vegetarian Chinese restaurant across the street.

Sounds Like: The results sound like a keg/key party attended by the Vaselines, early ’90s Thurston and Kim, and mid-’00s Matt and Kim. Almeida and Watson provide fuzzy guitar and boy-girl vocals, and recruit friends to handle the low end for live gigs, which usually end with the pair rolling around in a pile of wires, limbs, broken instruments, and feedback. At a particularly raucous 2010 New Year’s Eve performance in a basement gallery on Manhattan’s Lower East Side, an overzealous fan wanted in on the action, and Watson wound up with a champagne bottle smashed over his head. But the show pricked up the ears of ex–Smashing Pumpkins guitarist James Iha. “We thought he was fucking with us,” Almeida says. “[Watson’s] eye was superpuffy, there was no PA, it was a mess.” But Iha was not, in fact, fucking with them. He wound up producing the duo’s debut EP, Hands on Fire, out last fall, as well as their forthcoming, as-yet-untitled full-length.

Steal Your Fuchsia: In early July, the band was preparing for a set of opening gigs for A Place to Bury Strangers, customizing their tour van with hand-sewn curtains and linoleum flooring, making it look, as a friend put it, “like a weird dance floor from some kid’s bar mitzvah.” And in a nod to their sound’s undeniable psychedelic element, the two also tie-dyed and colored T-shirts with fabric markers to hawk on the road. “They sell eight different colors [in a package of markers], but we only wanted two, so we went to Kmart late at night and traded to get only the colors we wanted,” Almeida says. “We were stealing fabric markers,” Watson admits.

Black Magic Kingdom: During their last tour, opening for the Kills, Hunters took a side trip to an animal conservatory in Florida for a bonfire. “There was this guy there who must have been on some sort of hallucinogen,” Watson says. “He looked like Iggy Pop, all skinny and leathery, and he was dancing by the fire, like it was his spirit guide. And there were all these kids riding around on motorized big wheels that looked like choppers, and a papier-mâché banana that they kept trying to hit with a bat.” Watson and Almeida were also in Florida to play a show at the House of Blues in Downtown Disney. “I’d been to Disney World, like, once in my life, when I was nine, and just being there playing a rock show seemed kind of odd,” Almeida says, noting that she could see the audience’s pupils in the brightly lit space. “That,” Watson adds, “was memorable in a different way.”