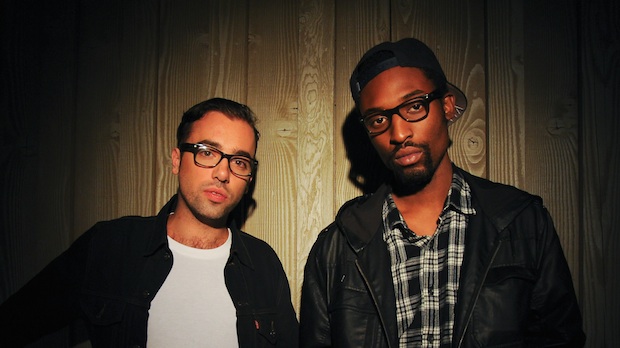 Listeners who haven’t encountered the Knocks before may experience a flash of cognitive dissonance the first time they hear the New York duo’s work. Their name may suggest the rock’n’roll lineage that brought us bands like the Strokes and the Kooks, but, quite to the contrary, the Knocks fall firmly in a tradition of sparkly, pop-infused, sing-along-friendly dance music that stretches through Daft Punk, Alan Braxe, and Fred Falke. Small surprise, then, that the duo of DJ B-Roc (Ben Ruttner) and JPatt (James Patterson) recently hooked up with Falke for the single “Geronimo,” for Kitsuné.

Now, just in time for Labor Day, the Knocks bring us an irresistible summer anthem that’s equal parts amped up and blissed out: Just the thing to turn around a summer that’s been marked by endless thunder storms and festival cancellations. Their fondness for Todd Edwards’ style of sample chopping comes to the fore on “The Feeling” (A&M/Octone) which stretches taut cut-up guitars, punchy piano chords, and rushing drums into an electro-disco trampoline that sends a euphoric chorus flying sky-high. It’s engineered to levitate festival crowds, but even true-school types with perpetually furrowed brows are likely to find themselves singing along, “I don’t want to fight it / I ain’t got a reason / I don’t want to fight it / If I got the feeling…”

“The Feeling” is out today, available exclusively on Beatport, and you can stream the whole thing right here. A remix EP featuring Com Truise, Seamus Hadji, TheFatRat, and Lazerdisk Party Sex, who co-produced Diplo’s “Set It Off,” is on the way. In the meantime, catch the Knocks at Jay-Z’s Made in America Festival on September 1 and, after that, supporting Dragonette on their U.S. tour.