A close-up look at all the bright lights, outrageous outfits, brilliant stage productions, and unapologetically heavy electronic music at the annual L.A. fest. 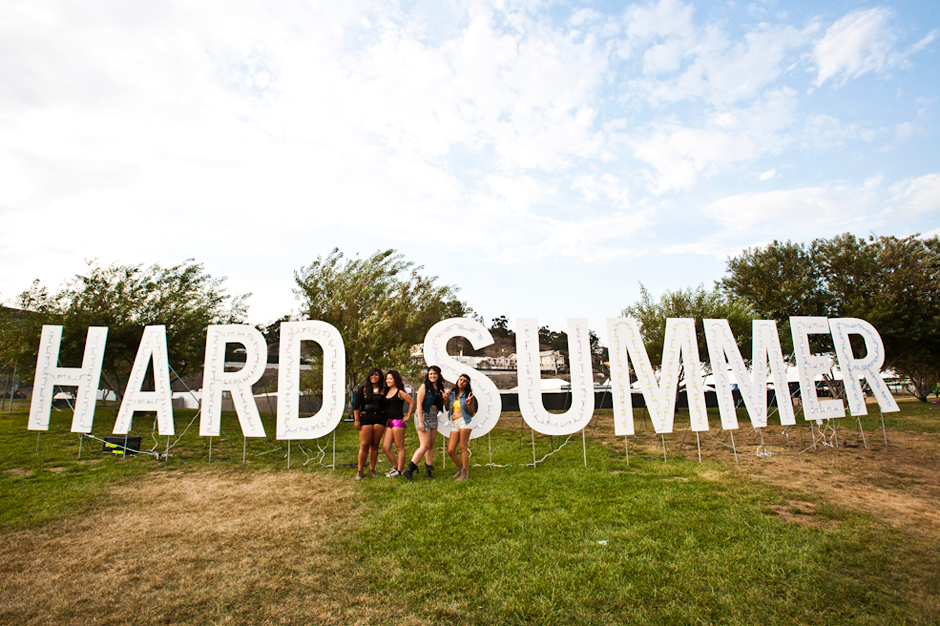 For two nights, a broad swath of green parkland in Los Angeles' Chinatown was converted into EDM Valhalla. The city's fifth HARD Summer Music Festival was a smashing success, and a blur of bright lights, outrageous outfits, brilliant stage productions, and unapologetically heavy electronic music. You'll find no David Guettas here. No Tiëstos, Fergies or Pitbulls. Headlined by Skrillex, Boys Noize, Bloc Party, and Nero, the beat-based bacchanal leaned heavy on dubstep American-style, with notable detours for the occasional rock band or rapper with enough moxie to throw their hat into the heaving, bass-addled ring. SPIN was there to report on all the madness; here are the 20 craziest things that we witnessed. CHRIS MARTINS

For two nights, a broad swath of green parkland in Los Angeles' Chinatown was converted into EDM Valhalla. The city's fifth HARD Summer Music Festival was a smashing success, and a blur of bright lights, outrageous outfits, brilliant stage productions, and unapologetically heavy electronic music. You'll find no David Guettas here. No Tiëstos, Fergies or Pitbulls. Headlined by Skrillex, Boys Noize, Bloc Party, and Nero, the beat-based bacchanal leaned heavy on dubstep American-style, with notable detours for the occasional rock band or rapper with enough moxie to throw their hat into the heaving, bass-addled ring. SPIN was there to report on all the madness; here are the 20 craziest things that we witnessed. CHRIS MARTINS 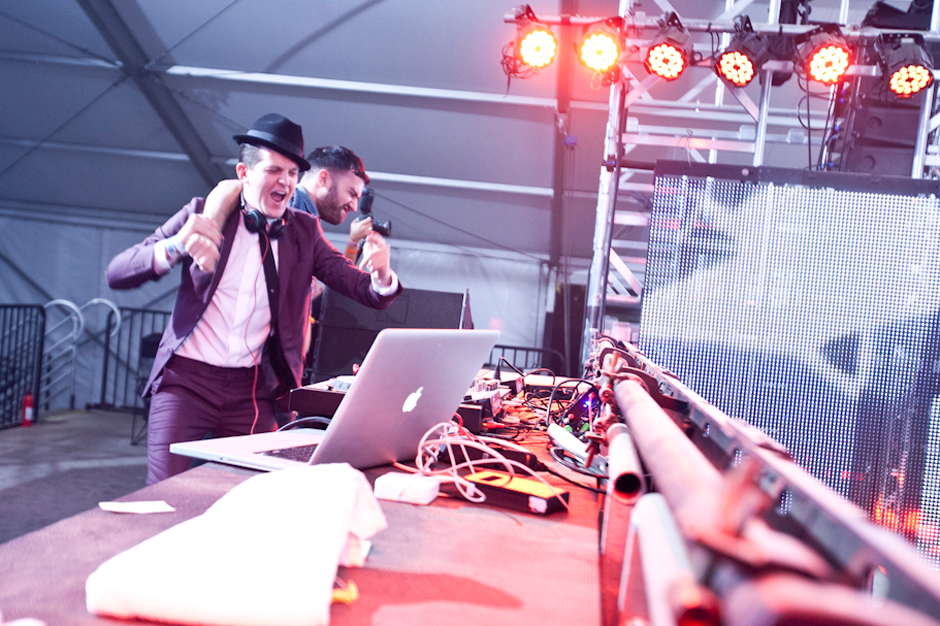 L.A.-bred Skrillex signee Dillon Francis avoided the obvious choices in favor of unusual edits — i.e., throbbing, circuit-bent versions of War's "Low Rider" and Bell Biv DeVoe's "Poison" — but it was the slow-seething reggaeton of his own "Masta Blasta" that caused one particularly stoked kid to throw down his crutches (just like in the movies!) and grind, one-footed, against his date. 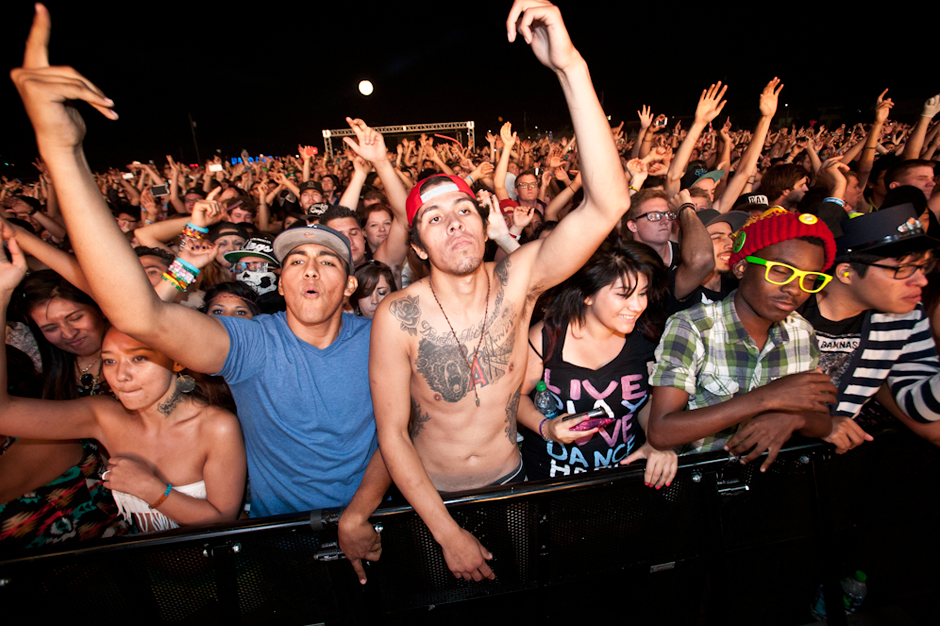 Imagine an unholy amalgam of Apache Line uprock and Celtic Riverdance with all the gleefully aggro stomping of a gang initiation. When a handful of dudes get going, it's nigh impossible to get through the crowd untouched, evidenced by the constant flow of girls gingerly passing, always with a hand toward the practitioner in case an elbow goes rogue. 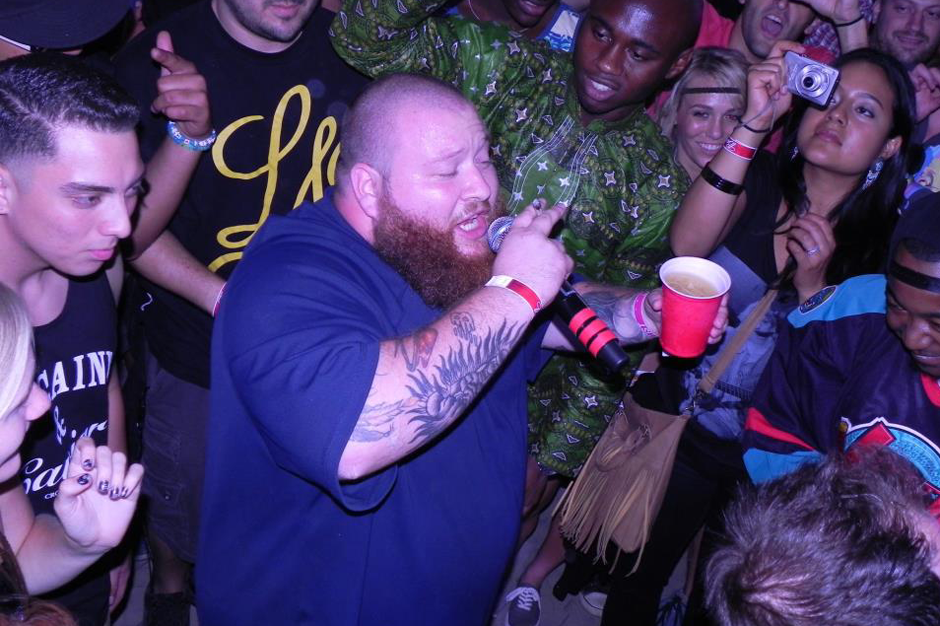 Red-bearded man-monster Action Bronson left the stage early in his set to rap amongst the people, which included Odd Future's weed-rap specialist Domo Genesis, his eyes reduced to reddish slits. After trading spliff hits with his pal, the hulking Queens MC tossed a young female festivalgoer over his shoulder and rhymed between slurps from a red Solo cup he'd kept clutched in his other hand. 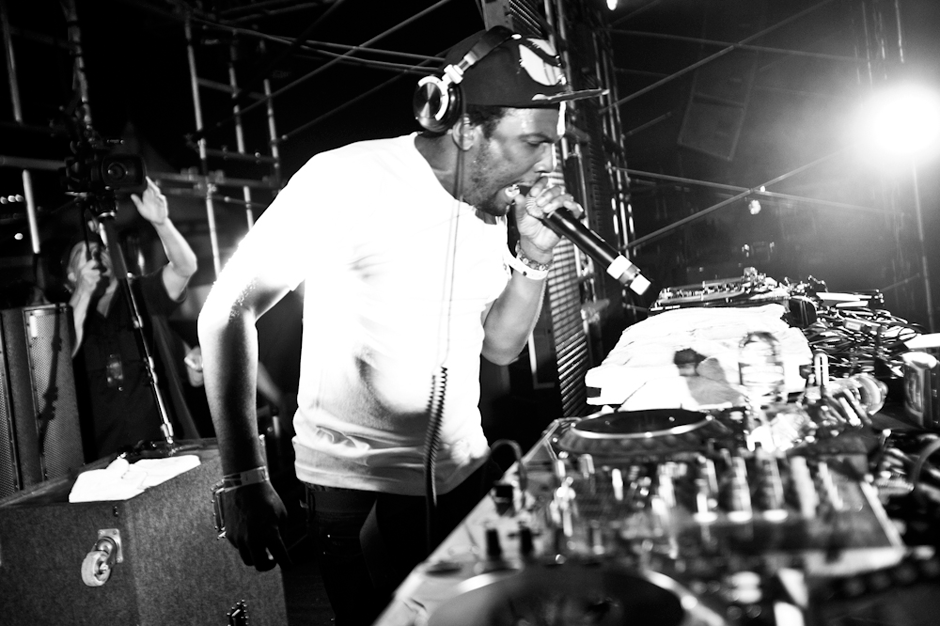 Local bass music ambassador and Skrillex mentor 12th Planet made a point to steer clear of dubstep, instead weighing his set toward trap rap and hip-hop heavy-hitters. After serving up a medley of Rick Ross, Machine Gun Kelly and Schoolboy Q, he dropped 2 Chainz's "No Lie," which inspired Gaslamp Killer to return to the booth, where the two cooked and head-banged to the beats. 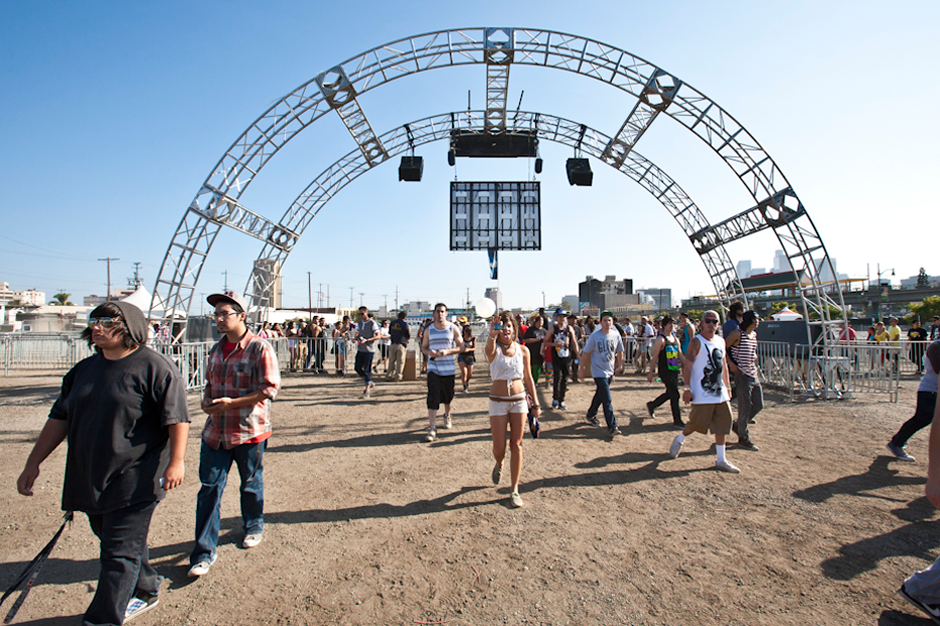 Tighter than Fort Knox. Approaching the park, you'll find police stationed on every block while bike cops and the city's Prius-driving parking enforcers circle. Inside the gate is a maze of fencing at least ten rows deep and as wide as the grounds, leading to a pat-down that includes shoe removal. Once in, you're greeted by K-9 units, helicopters(!), and privately patrolled double-fenced demilitarized zones. Now, dance! 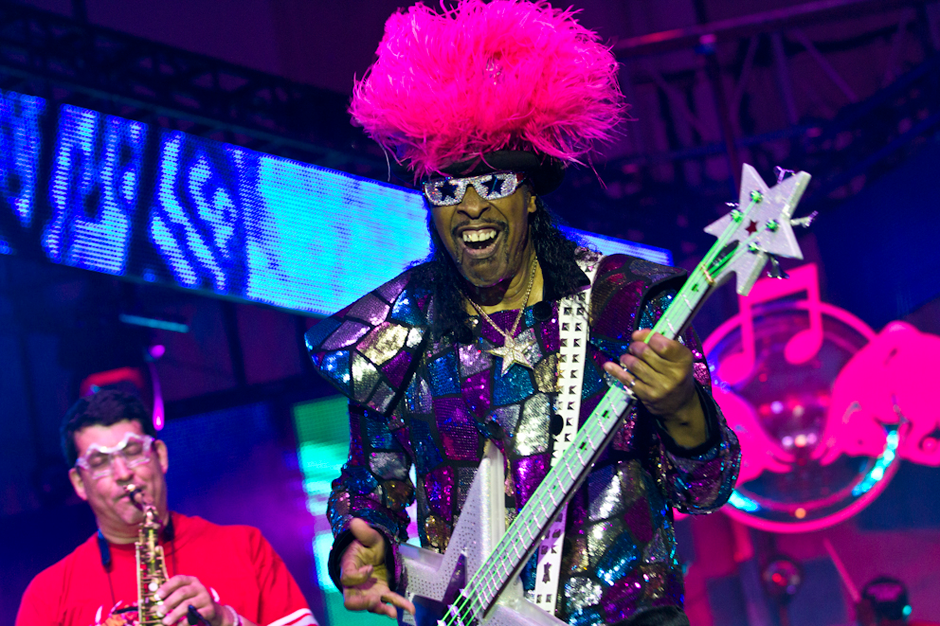 "What is funk?" asked the spangly-suited '70s icon before answering his own question: "Funk is making something outta nothing!" He and the Funk Unity Band did just that, ignoring the glaring fact that most of the fest had forgotten them, and instead playing a horn-blazing, bass-slapping, utterly outsized set complemented by dancers whose style was, we think, stripper alien meets cyber-flapper. 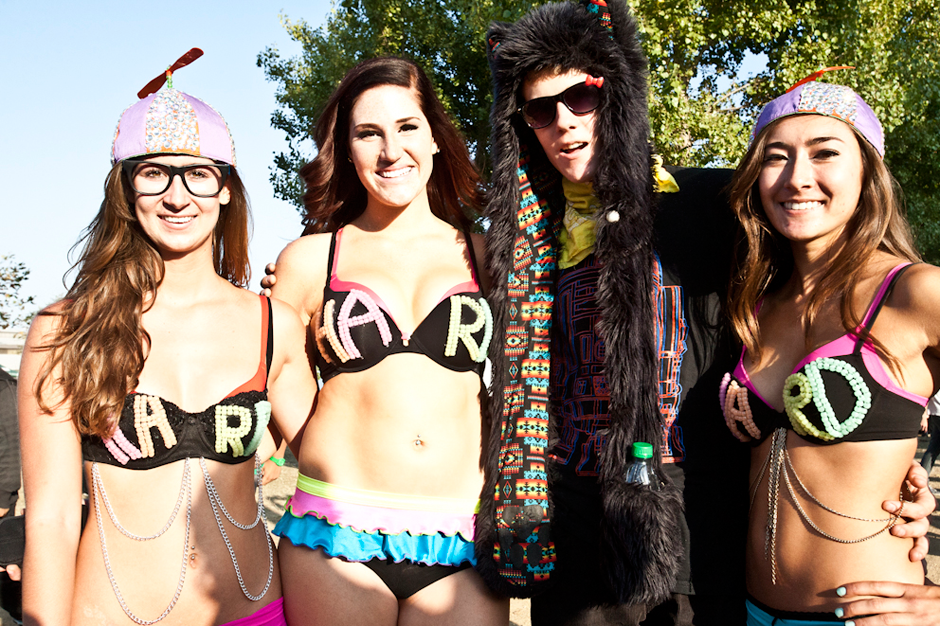 "This is soooooo fun!" gushed one young woman on her way out of the Skrillex-curated OWSLA tent. To which her bro responded: "So many people say, 'I wish I was born in the '70s, I wish I could've gone to Woodstock.' But, damn, Woodstock didn't sound a tenth as good as this!" 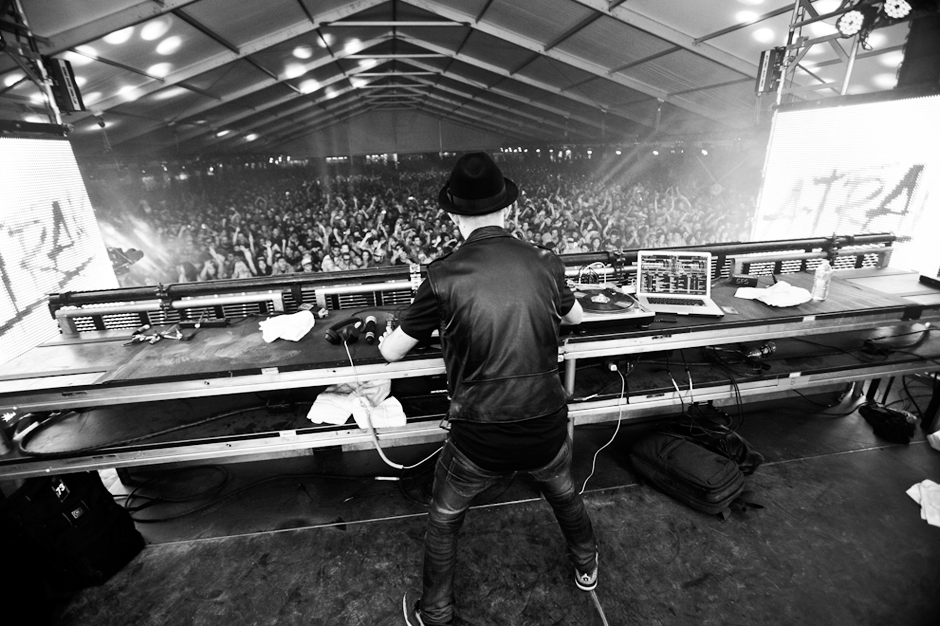 In the midst of his Hypercolor carnival of brain-bashing beats — folding in standout cuts from Wolfgang Gartner and Martin Solveig — A-Trak took a moment to get in touch with his roots. The former DJ champ launched into a furious scratch solo, cutting fast and sharp over trunk-eviscerating bass (that's boom, not wub) while the suddenly still crowd watched in equal parts awe and confusion. 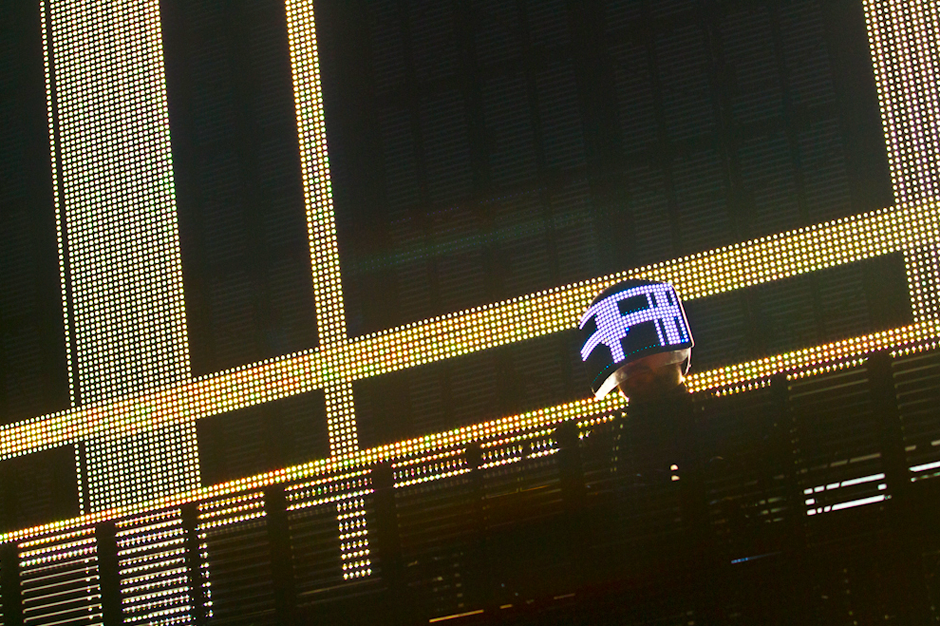 English IDM (remember those letters?) innovator Squarepusher also showed off some old school chops by whipping out his actual bass guitar and delivering a handful of punishing solos whose guttural rumblings were run through a seemingly endless array of audio-warping effects. Some plugged their ears, but others fawned over the new dubstep-damaged material coming from the LED-masked man. 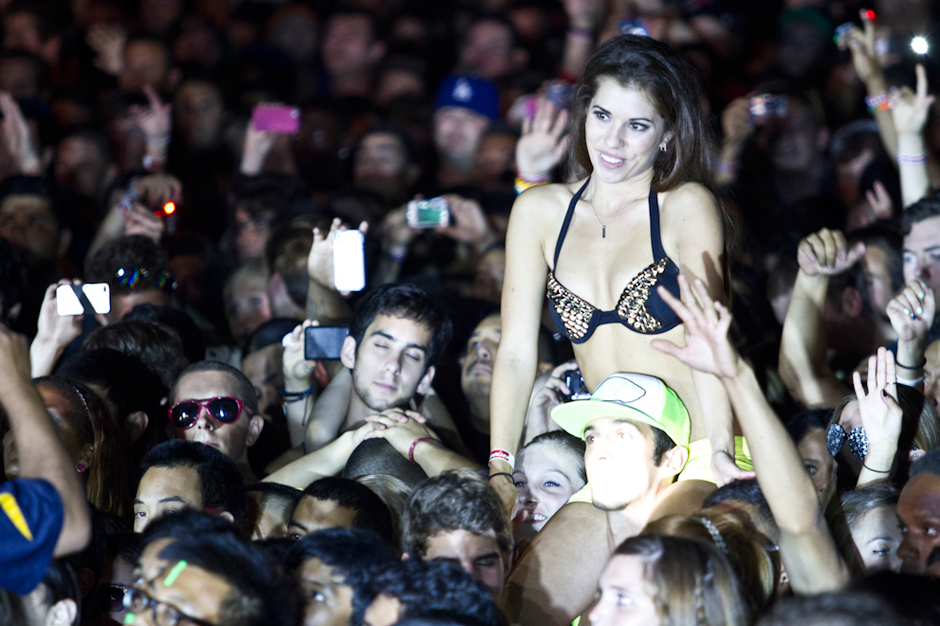 Topless, chest minimally obscured by glittery stickers, "Skrillex" scrawled sloppily across her stomach, wearing furry boots and underwear, legs wrapped around the waist of her Jersey Shore-plucked boyfriend, doing hanging sit-ups for the camera of some drooling goon. 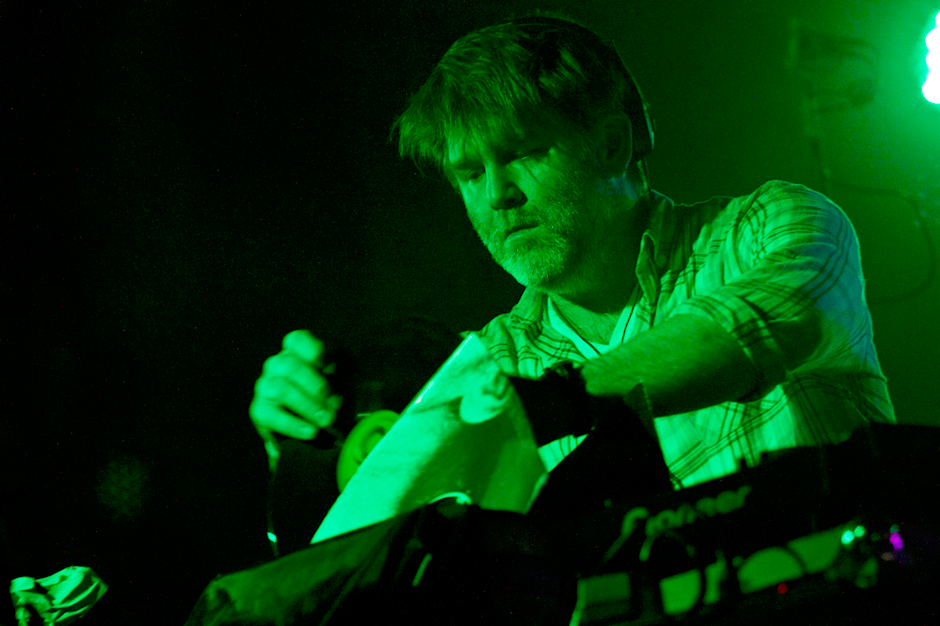 HARD attendees aren't exactly seeking subtlety, but those after respite found their pied piper in LCD Soundsystem's James Murphy. The scruffy DJ skipped on theatrics and kept his head low, focused on the bounty of rare groove disco and post-punk vinyl he'd brought with. The best track, however, came from L.A. noobs Poolside for their wavy cover of Neil Young's "Harvest Moon." 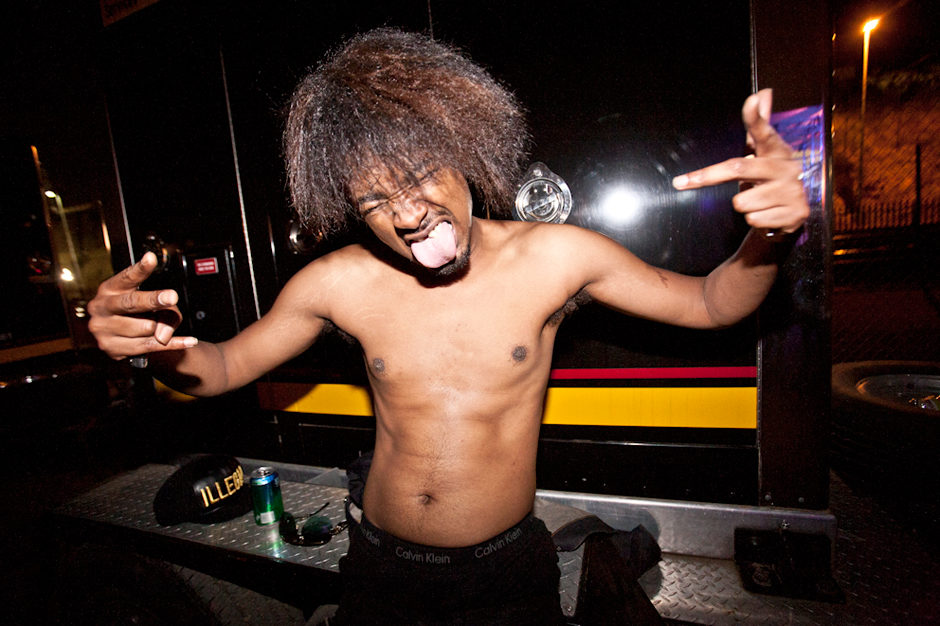 Those eagerly awaiting their TSA-style security pat-down were treated to a half-serious promo video that included a list of banned items (including, in all seriousness, Paris Hilton and raver paraphernalia) and performances of note. Among the latter were James Murphy, billed as "the oldest living yodeler," and raunch-rap kingpin Danny Brown, "doing his famous Jerry Seinfeld impression." 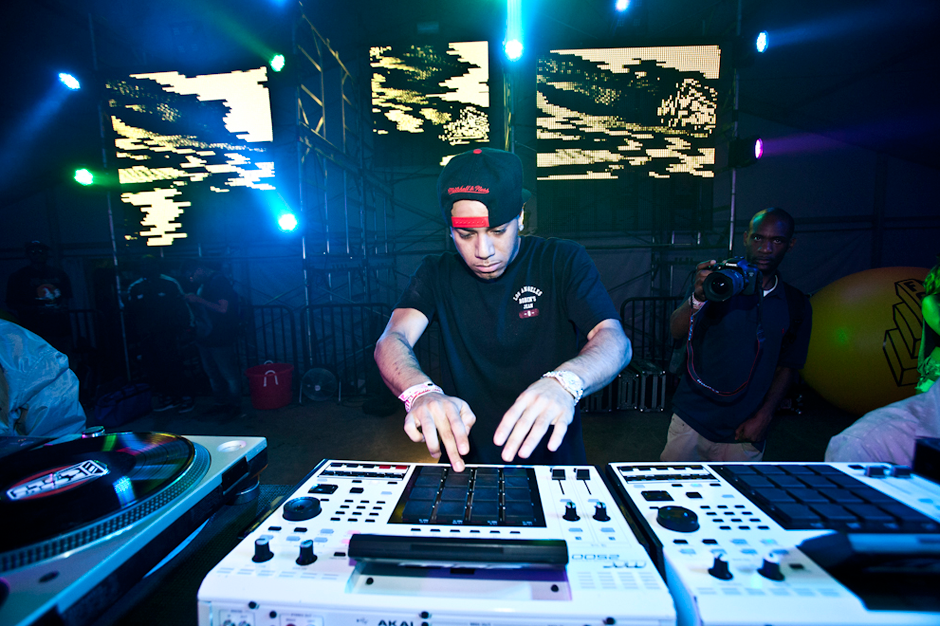 Rhode Island's best (only?) MPC-wielding beat savant took the meaty, mighty sounds of dubstep and chopped them to bits, then pummeled his drum machines with such astounding force and dexterity that the end result — a series of sound-stitched Frankenstein's monsters — somehow sounded uglier and more brutish than the source material. Not love-drug friendly. This was basically breakcore.

16.All of the lights 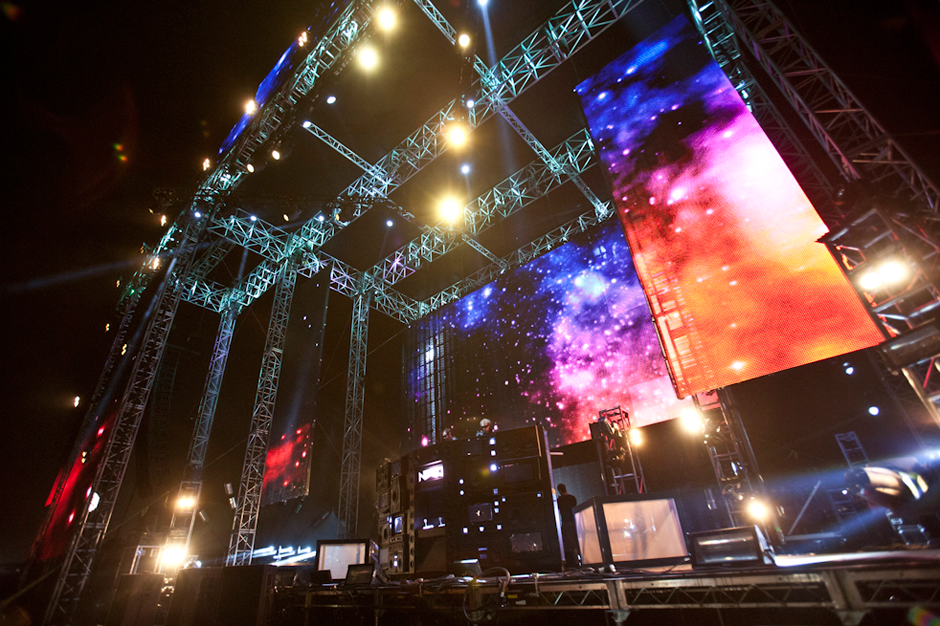 Like, whooooaaaaa. But really. Each of the two outlying tents were equipped with LED panels running their entire length, while the pair of stages sported screens large and bright enough to pass snuff for an Olympics opening ceremony. Meanwhile, the grounds were dotted with hue-shifting balloons and vivid bulbs arranged to spell out H-A-R-D S-U-M-M-E-R. It was like being inside a kaleidoscope. 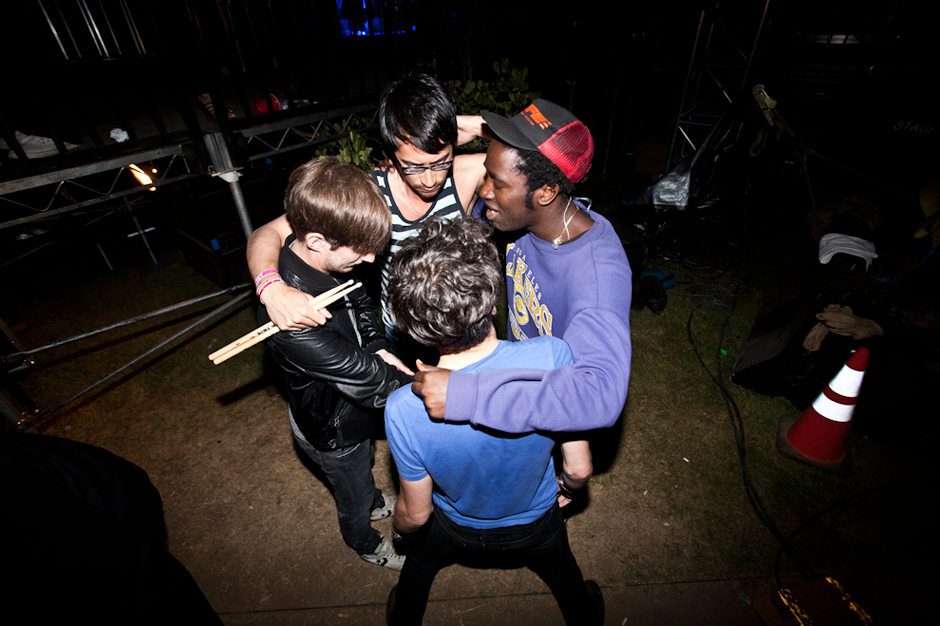 Don't get us wrong. We were as happy as the next person (over the age of 25) to see Bloc Party. They crushed it, especially on "Positive Tension," whose Gang of Four-like kick and noisy punk climax succeeded in stirring up the pacifier-suckers. But going up against the wall-to-wall bluster and skronking circuitry of pretty much every other performer, the band didn't stand a chance. 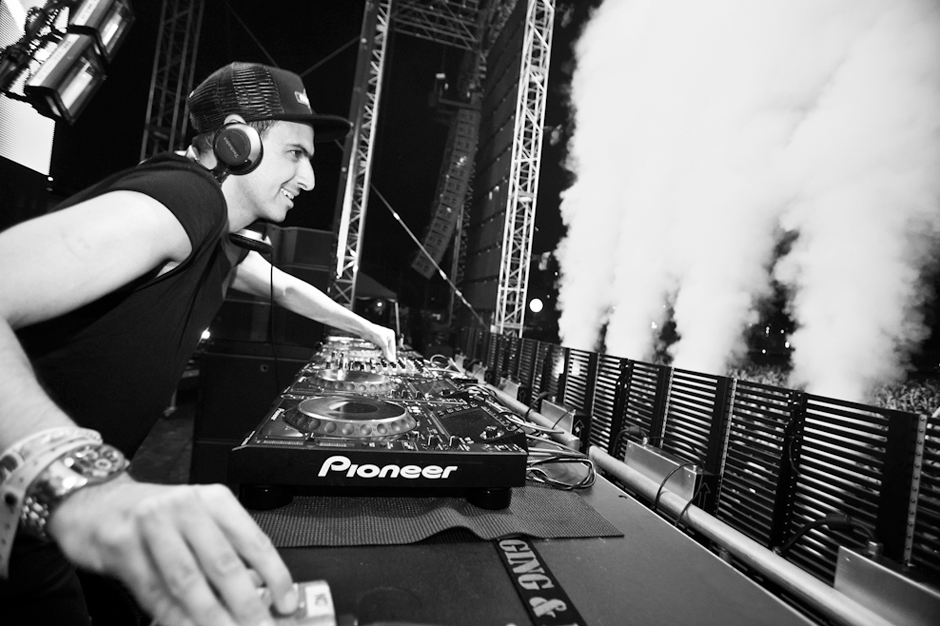 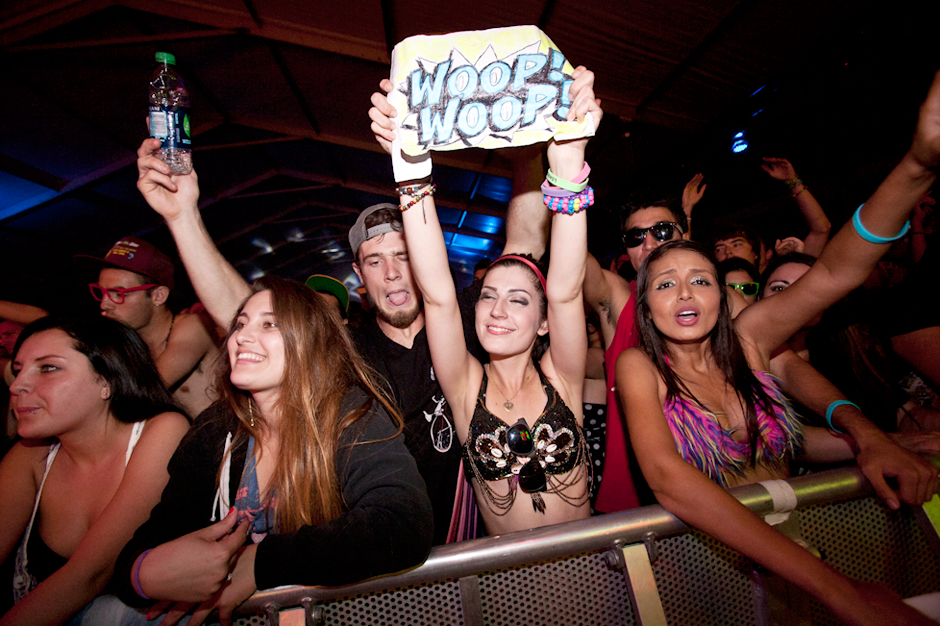 Turns out rock'n'rollers fears were founded in reality. If the cultural explosion of EDM and the monetary might of its practitioners still isn't enough to convince you of the dominance of four-on-the-floor, just wade into the crowd and wait until you hear that unmistakable cry: the high-pitched "Woop! Woop!" that once punctuated the sets of '70s sirens like Donna Summer. It's back and bigger than ever. 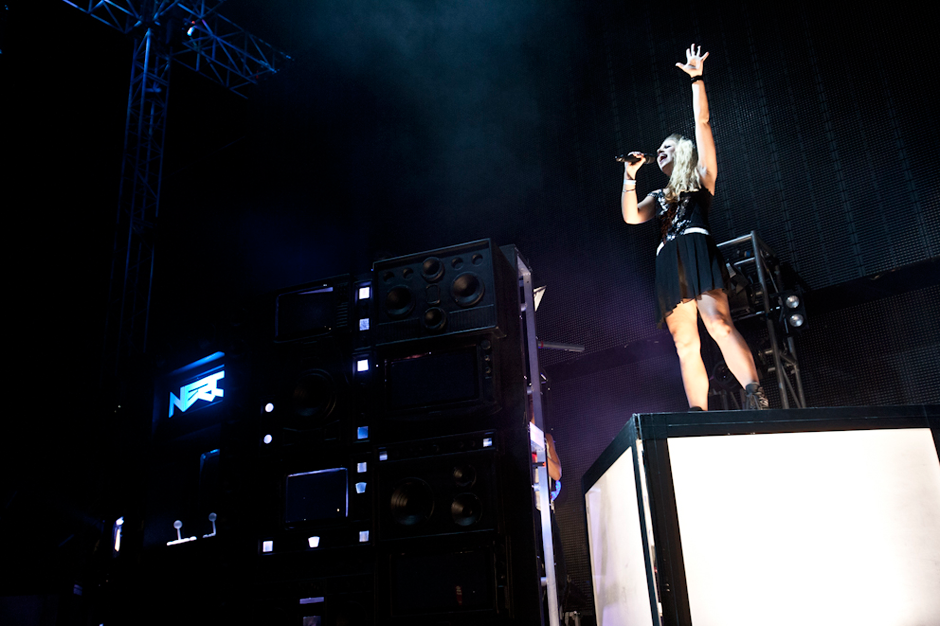 The moody, dubstepping atmospherists of Nero had a trick up their sleeves in singer Alana Watson. Her reverberating soul-drenched coo leant their set a level of emotion and cohesion that very few others attained. Bookended by spacey passages reminiscent of Jean Michel Jarre, drop-tastic songs like "Innocence" and "Guilt" were weighty enough to live up to their immense themes. 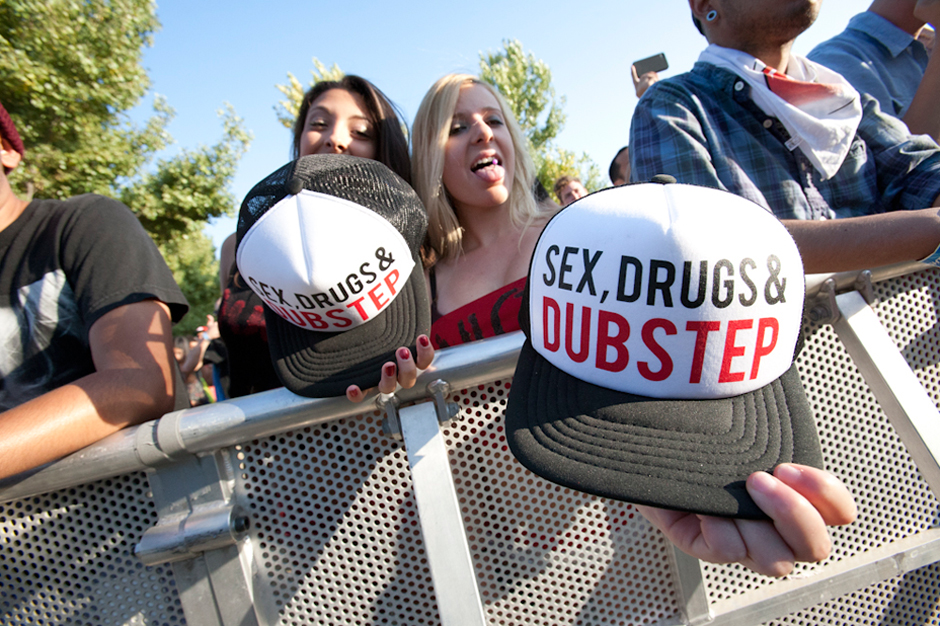 Sunglasses at night. An iridescent leopard-print catsuit. A girl with plastic googly eyes stuck all over her body. So, so many "Sex, Drugs & Dubstep" tees. Painted nipples. Tough guys with their faces bedazzled. A dude in a tie-dyed karate gi. Oompa Loompas. The Hulk. A six-and-a-half-foot man completely covered in stars-and-stripes spandex. Girls who look like Skrillex. 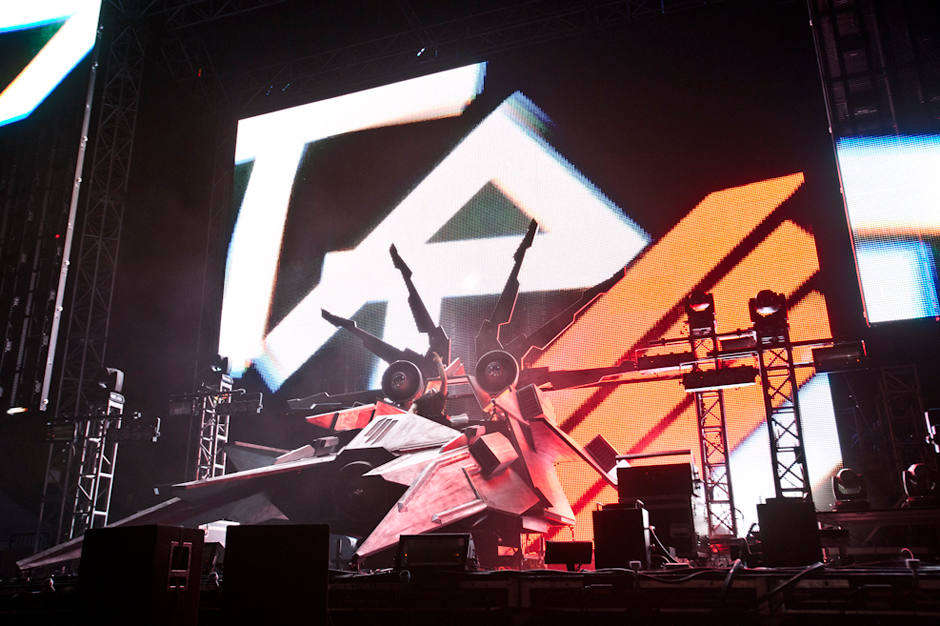 We've been watching them pass through various cities all year, but there was nothing quite like seeing Skrillex and his custom-built X-wing make a proper homecoming. EDM's boy king was captain of the entire event, headlining Saturday night from atop his unusual stage set while eye-boggling images flew by behind him. (Best in show was the Bollywood "Thriller.") He played a roughed-up version of "Scary Monsters & Nice Sprites," and leaned hard on heavy fare like "Right In" and "Right On Time," ecstatically shouting every few songs, "It's so fucking good to be home!" He had virtually every attendee enrapt, including a small group of policemen who were spotted snapping photos from a hill in VIP.