Flaming Lips Talk About Sex, God, and Ke$ha on ‘Colbert’ 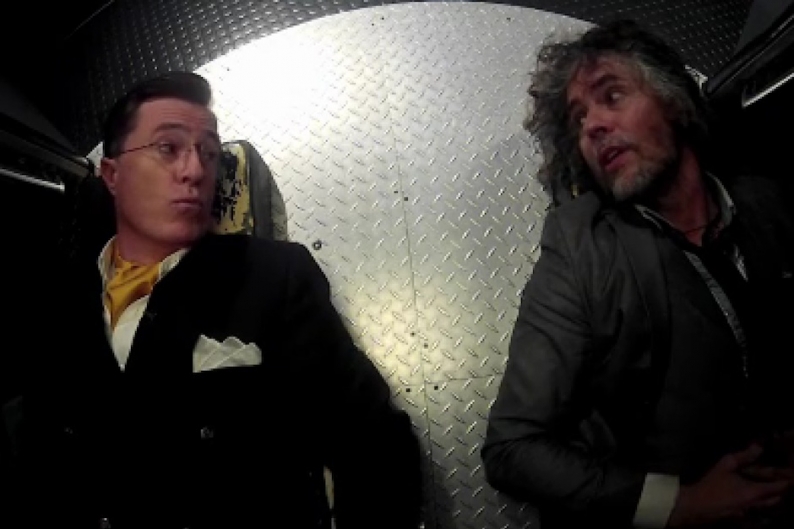 Ladies and gentlemen, the Flaming Lips and Stephen Colbert are floating in space. Or at least sitting on their backs in a space capsule. After interviewing Grizzly Bear in a lifeboat and Santigold in a helicopter, the Colbert Report host closed out his week of StePhest Colbchella ‘012: Rockaugustfest coverage by chatting with Lips leader in a spacecraft on display at New York City’s Intrepid Sea, Air, and Space Museum.

Lying on his back next to Colbert, Coyne said he’d give up music before giving up sex, refused to apologize to a higher power for starting the Oklahoma City psych-rock band with equipment stolen from a church, and said he’s actually fwends and not just “pwofessional cowweagues” (Colbert’s words) with Ke$ha, among others. Last night’s episode also featured a Bon Iver-less rendition of And Heady Fwends’ “Ashes in the Air.” As web exclusives, the Lips performed soon-to-be-musical Yoshimi Battles the Pink Robots’ “Do You Realize??” and edible gummy skull track “Drug Chart.” They even let Colbert borrow one Coyne’s famed human-size hamster balls for his fest farewell.

Sadly, the Flaming Lips did not preview any songs from their upcoming 15th album, which Rolling Stone reports is tentatively titled The Terror. The Lips reportedly started working on the album in the midst of Fwends, tweaked it a bit more in July in upstate New York, and are aiming for a fall release. Coyne is quoted as saying the album came together as multi-instrumentalist Steven Drozd had returned to the depths of drug addiction.

As with 2009’s Embryonic, the new Lips album moves away from conventional songcraft, focusing on “being more in-the-moment and more spontaneous,” Coyne told Rolling Stone. And don’t look for the Flaming Lips to go out and make a predictable album: “Everybody, if you try hard enough, can sit here and say ‘let’s put this on there, we’ll sound a little bit like Wilco, we’ll sound a little like Radiohead. People will love it! It will be great,'” Coyne is quoted as teasing. “If anybody does that, fuck ‘em. The minute you think you have the ability to make it perfect, you’re a dumbass.” With that, and the Colbert human hamster ball video at the bottom of the page, our post comes to an appropriately spontaneous, imperfect conclusion.