Rozay stands in front of a marquee billing a sold-out Apple show in this rapidfire video from 'God Forgives, I Don't' 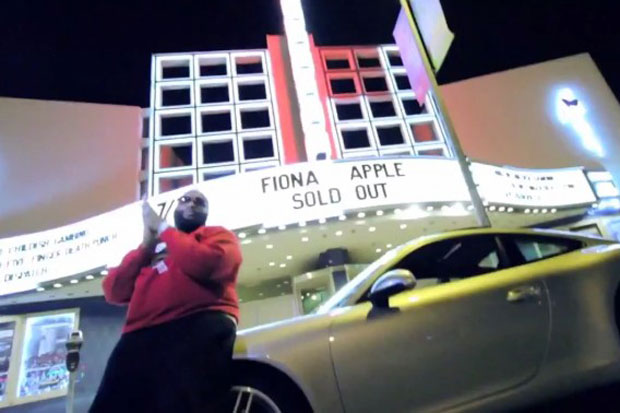 Rick Ross’ improbable rise to rap supremacy is paved with name-drops — the Black Mafia Family drug cartel on Teflon Don’s “B.M.F. (Blowin’ Money Fast),” MC Hammer on, well, “MC Hammer” — but even by those extravagantly eccentric standards, his latest reference might come as a surprise.

In the video for “911,” a straight-ahead luxury-rap lurcher that’s one of the better tracks on Ross’ recent mixed-bag album God Forgives, I Don’t, Ross mostly just cruises around in the Porsche of the title. The busy, rapidly edited visual style, courtesy of previous Ross collaborators DRE Films and SPIFF TV, is well suited for viewing on mobile devices — no narrative, just a lot to look at. Somewhere amid the colorfully blunt(ed) money, drug, and sex boasts, bolstered by previous Maybach Music Group associate Young Shun’s electronically menacing production, Ross pulls up in front of a venue where a sold-out Fiona Apple show is billed on the marquee (as Stereogum points out). Sure, Apple might’ve had a very different idea in mind when she sang “Criminal.” But the pairing definitely opens up new potential album titles for the masterful singer and songwriter, whose latest album The Idler Wheel… is one of the year’s best so far. When the Pawn Hits the Bawse, maybe?

In other Ross-brushes-with-’90s-music-icons news, the Florida rap kingpin has tapped OutKast half André 3000 to direct the video for God Forgives, I Don’t centerpiece “Sixteen,” according to MTV. Three Stacks, who’s starring in an upcoming Jimi Hendrix biopic with none of Hendrix’s original songs, plays guitar, banjo, and raps on the the saxophone-flaunting track, about how the conventional number of bars in a rap verse “ain’t enough.” Ross reportedly said he wants to make a video for every track on his latest album, so there will be plenty more chances for his allusions to Frank Ocean, Smashing Pumpkins, and whichever other buzzed-about acts with 2012 albums happen to strike his fanciness-loving fancy. Someone should hand Rozay that Cooly G record.