Elite Gymnastics Goes Solo, Gets Emo on ‘Andreja 4-Ever’ 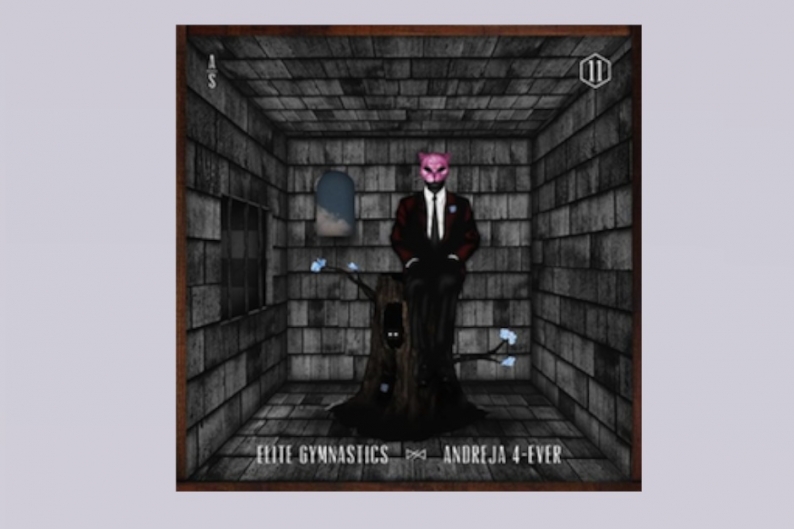 The lyrics booklet that came with Elite Gymnastics’ 2011 debut album, Ruin, was like a warped Rosetta stone. Here the Minneapolis-originating duo of James Brooks and Jonathan Clancy was making technicolor electronic pop that that used whatever oddly fascinating style came across the RSS feed — K-pop, chillwave, rave — as a wide-eyed sonic playground. The booklet, sumptuously illustrated by Clancy, and the lyrics, morbid and lonely and kind of profound, showed the murky yet beguiling depths lurking beneath Brooks’ digitally treated whispers and ecstasy-fueled breakbeats.

Clancy has left the group now, and Brooks has reportedly moved to New York. “Andrea 4-Ever,” Elite Gymnastics’ new song for Adult Swim (via Pitchfork), sees Brooks moving toward the light. There’s no need for a lyrics book to decipher the singer’s murmured reflections on love and heartbreak, and the uncluttered arrangement of drowsy harmonica, crystalline keys, dusty breakbeats, and ambient seashore sounds is inviting without Ruin’s insidiousness, melancholy but not dark. It could open Elite Gymnastics up to a bigger audience without betraying the sunny melodies and inventive optimism that hooked current and former tourmates such as Sleigh Bells and Grimes.

The signature song on Ruin (which led to the remix projects Ruin 3 and Ruin 4 earlier this year) is “Minneapolis Belongs to You.” Though the song epitomized the album’s occasionally too-near-the-bone lyrical content (“When you’re dead, they will toast your life at your friends’ shitty DJ nights” — this was before the Portlandia episode!), its title also placed Elite Gymnastics along a continuum from such knowing yet sincerity-seeking synth-popsters as Saint Etienne (“London Belongs to Me”) and Air France (“GBG Belongs to Us”), a chic, cosmopolitan dance-pop niche that runs back through Pet Shop Boys and beyond. And while Brooks’ newly foregrounded vocals could surely draw a sneering comparison or two to early-2000s indietronica acts like Her Space Holiday — why not instead go back to underappreciated ’90s indie beatmongers like Land of the Loops? — the overall effect is something like Danny Brown’s pivot from libidinous shit talk to Pharcyde-worthy narrative on another nostalgic 2012 online freebie, “Grown Up.” Whoever thought?